There was something about the moment that was both magical and haunting. 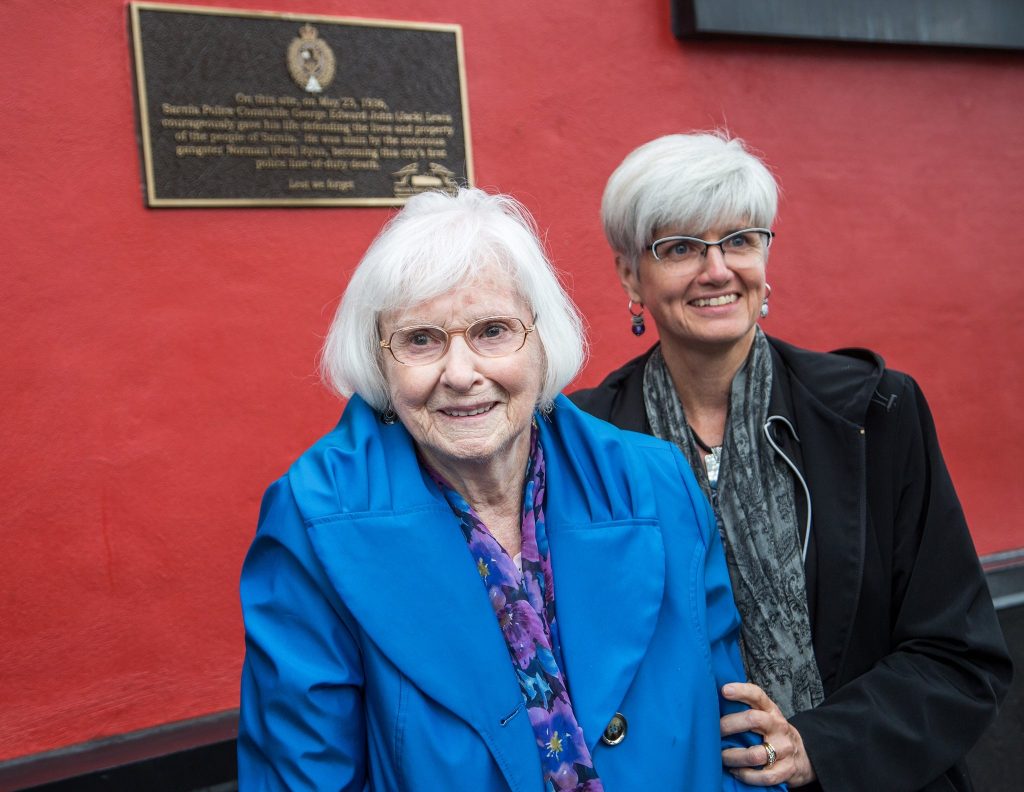 On a Sunday afternoon in a crowded downtown hall, Det.-Const. Ken McLachlin sang the ballad he had written to honour a fallen brother officer. He sang it on National Police and Peace Officers Day, in front of over 100 of that fallen officer’s family.

Most of them had never before heard “The Ballad of Jack Lewis” – the story of Sarnia’s first police line-of-duty death. Lewis was killed by gangster Norman J. (Red) Ryan during a botched liquor store robbery in Sarnia, Ont. on Victoria Day weekend in 1936.

Most strikingly, McLachlin sang the ballad mere steps from where Const. Lewis was slain.

The song was part of a commemorative plaque unveiling on the site of the building at 140 Christina St. that had once housed Liquor Store 46 – the city’s only liquor store in 1936, and the target of Ryan and gang member Harry Checkley on that fateful Saturday more than 82 years ago. The event was organized by the Sarnia Historical Society and sponsored by Mayor Mike Bradley and the Sarnia Police Services Board.

Grandchildren Heather Lewis and John Harding, who helped to spread word of the plaque dedication to Lewis family members across southern Ontario, never had the chance to meet their grandfather. Lewis left his wife, Vera, a ten-year-old daughter, Donna, and an eight-year-old son, Jack, at the time of his death.

Those children are gone, but four generations of Lewis family members were there to mark this special day.

“He loved children,” Garrison recalled. “We used to have so much fun with him.”

Wilma Hardick remembers her Uncle Jack reaching down to swing her up and onto his shoulders.

Both also clearly recall the terrible grief that wracked the family on that awful Victoria Day Saturday.

A wave of shock and grief convulsed the entire town of 18,000 as news of the officer’s death raced across Sarnia. It was one of the community’s first profound shared tragedies.

It was a time when crime was rare in Sarnia, and violent crime even rarer.

Eighty-two years later, it was a time to remember. Jack Lewis’ sacrifice has long been overshadowed by the sheer notoriety of the man who killed him, a blazing gun in both hands. Norman J. Ryan was a career-criminal who had been freed from a life term in prison after appearing to have transformed himself into a model, reformed prisoner.

Known as Red due to his shock of copper-coloured hair, Ryan was also called Canada’s Jesse James – notorious throughout Ontario, Quebec, and the American Midwest. He had been described as a “man with the face of an angel and the black heart of a devil.”

Born in Chicago in 1895, Ryan moved to Toronto with his family at a very young age. As a teenager, he was already running his own street gang in the city, burglarizing homes and businesses. Ryan would continue to live a life neck-deep in violent crime, ultimately graduating to bank robberies and armed holdup.

Incredibly, the gangster who was driving the roads of Ontario on that Saturday afternoon had already survived a sentence for a life term in prison, four sentences of 25 years, one of 12, one of eight, another of nine and one for three and a half years – 19 convictions totalling 139 years – plus a life sentence for a Toronto bank robbery.

During his final incarceration in Kingston Penitentiary, Ryan had begun to suddenly take on all the appearances of sainthood.

He sat in his cell, carving statues of the Virgin Mary out of soap. He became a model prisoner, sermonizing constantly to other convicts on the foolishness of a life of crime. If he ever had another chance, he told the prison warden, he’d “throw off his life of crime like a set of dirty rags.” On one occasion when the prisoners rioted, Ryan refused to take part.

A boyhood friend, who became a writer for the Toronto Star, began writing about the reformed criminal who had seen the errors of his ways now being needlessly confined in prison.

Prime Minister Bennett paid a surprise visit to Kingston one July morning in 1935, and spent part of the day visiting the prison. In the course of his visit, he met the notorious Ryan, who spun him a story designed to melt his heart.

Bennett was impressed when Ryan told him he “would not take all the millions of Rockefeller and go through what I have gone through during the past seventeen and a half years. Just a wasted life,” he continued. “What a fool I was! What a fool anyone is who thinks crime pays him a dividend. I want to say this to boys and young men, here and in every part of Canada. ‘Go straight. Don’t keep bad company.’

“My example has been a horrible one,” Ryan told the prime minister. “But from now on, I am going to live straight.”

It was a monstrous con.

Ryan and his colleague in crime on that day in Sarnia were also killed in the robbery attempt – gunned down in a stairwell of the liquor store by Det. Frank McGirr and Sgt. George Smith – officers who had responded to the alarm with Const. Lewis.

In the ensuing 82 years, the legends and notoriety surrounding Red Ryan have grown. The name of Jack Lewis, with the exception of remaining family members and his brothers in blue, had been forgotten.

It was the Sarnia Historical Society’s Ron RealeSmith who came up with the inspiration for raising the thousands of dollars needed for the bronze plaque to Lewis and the associated costs of a public dedication.

RealeSmith decided to have the society apply to Ontario’s Attorney-General for a $1,000 reward for Ryan’s capture that had never been paid. The Society advised the province that the funds would be used to create a public memorial to Const. Lewis.

When the province, predictably, declined to honour the request, RealeSmith issued a press release decrying the decision.
Within 24 hours, anonymous donorshad contributed the funds needed.

The grand observance on National Police and Peace Officer’s Day was the proud culmination of that effort.

* Based on a story which appeared in The Sarnia Journal.

Phil Egan has spent 40 years in the travel and publishing industries. He is currently on the Sarnia Historical Society’s board and is also a novelist, historian and freelance writer with two sons. He is currently writing his second novel about the Sullivans of Guelph.
Print this page