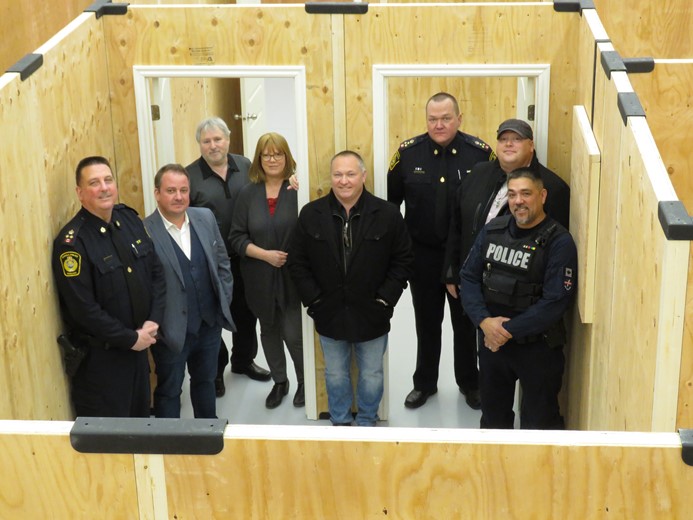 The Sarnia Police Tactical and Academic Training Centre, a 2700-square-metre (8,900-square-foot) windowless facility, is located in the north end of the old Tepperman’s store, one source reports.

More from Sarnia This Week below:

“It’s a beautiful facility,” said Sarnia Police Chief Norm Hansen. “Not many police services have something like this.”

It’s the only police training centre in a mall in Canada, said the service’s chief training officer Shaun Osborne, the lead officer behind the project.

The finished space includes a plywood-plastered room for simulating searches and other tactics for entering buildings, dealing with armed individuals or attending drug calls.

Plywood targets, walls, and equipped with a ladder for training officers to keep an eye on everything from above, the LiUNA Local 1089-sponsored simulation room is designed for officers to use simulated ammunition – detergent packed 40-calibre rounds, police said.

“We’re trying to get it as realistic as possible, that way people react appropriately,” said Const. Giovanni Sottosanti.

The service had occupied a smaller training area at the mall starting in 2017, before the move to the larger training area was initiated by other mall renovations. There was no simulation area in the old space, Hansen said.

The other major training area in the Sarnia Police Tactical and Academy Training Centre is the defensive tactics room, where officers practice handcuffing, using batons and other techniques, Sottosanti said.

The room – outfitted using a donation from Kelgor – was designed with seams on the Kevlar ground mats so officers’ duty belts will no longer catch, he said, noting in the past those snags caused damage to equipment and injury to officers.

A classroom – there’s historically not been enough space at the Sarnia station – gives space for seminars, and the facility also includes a kitchen, and shower and change facilities for men and women, Sottosanti said.

At previous training grounds, like the former, since-demolished Sarnia General Hospital site, there sometimes weren’t bathrooms or heat for officers, he said.

“The idea is to have everything in one place,” he said about the new facility.

The space was turned over to police Dec. 19.

Sarnia police pay a $5,000 monthly lease – $60,000 per year – for the space under an agreement for five years, police said, noting it’s considered a municipal building and is tax-exempt. 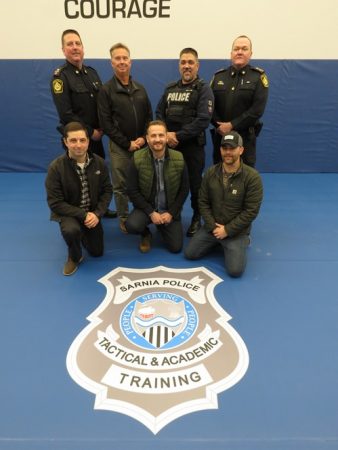