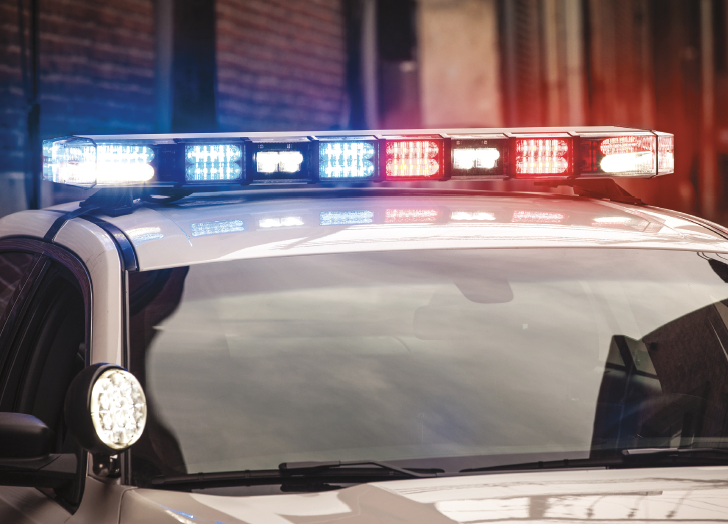 In R. v. Webber, 2019 BCCA 208, two patrol officers driving an unmarked police vehicle saw a car being driven in an erratic manner. It was daytime and the car’s driver made quick turns in a pedestrian‑heavy area. The driver also drove through a controlled intersection without stopping, contrary to B.C.’s Motor Vehicle Act (MVA). The police activated their lights and siren and the car stopped abruptly, causing the driver to jerk forward and backward. The officers saw the driver lean towards the front centre console of the car and make a motion with his right arm.

The officers conducted a records search of the licence plate, which revealed the car was registered to a “Jason Webber” and had been involved in an attempted murder investigation about nine months earlier. The officers approached the driver and asked him to step out of the vehicle. The driver was shaking and seemed excited. And the vehicle was strewn with empty cans and bottles, two cell phone chargers, a cell phone, various fast food wrappers and half a dozen five-hour energy drinks.

After the driver stepped out of the car, he was patted down but no weapons were found. He remained by the curb with one officer, while the second officer returned to his vehicle and conducted a second police records check of the driver, now known as “Mark Webber.”

The officer then conducted a safety search of the centre console of the vehicle. He saw several small bags that appeared to contain cocaine. The officer stopped his search, arrested Webber, returned to the vehicle and conducted a more thorough search as an incident to arrest.

The police seized about 83 grams of cocaine and nine grams of MDMA (ecstasy) from the vehicle. Webber was subsequently charged with two counts of possessing drugs for the purpose of trafficking.

In B.C. Provincial Court one officer described Webber’s motion as “stuffing and pulling,” while the items seen in the car were consistent with cars involved in drug trafficking. The other officer described Webber’s action as a stuffing motion or a motion where he was putting something in the centre console. Both officers testified they were concerned that the driver was pulling out or concealing something in the console, possibly a weapon.

As for the additional information revealed during the second police records check, an officer said it elevated his concern that a weapon may be concealed in the front centre console. In the officer’s view, the weapons prohibition suggested Webber had used weapons in the past. As well, the links between Webber and the drug trade elevated his safety concerns as the officer was aware of frequent violence in the Vancouver drug trade.

Among other things, Webber argued that his rights under ss. 8, 9 and 10 of the Charter had been breached. He contended that there was no legal basis for his initial detention, the pat‑down search or the search of the car’s console. Furthermore, he suggested that he was not informed of the reason for his detention and was not adequately apprised of his right to counsel. In his view, the evidence obtained from the search of the console should have been excluded under s. 24(2) of the Charter.

The judge found the Webber’s initial detention lawful. Because he failed to stop at a controlled intersection and because of his erratic driving, the police had a legal right to stop him. Moreover, the fact the police issued no ticket did not render the detention improper. Webber also had been informed of the reasons for his detention — erratic driving and failing to stop. The judge also ruled that s. 10(b) was not triggered during a traffic stop for driving offences.

As for the pat‑down search and the console search, the officer subjectively believed they were both necessary to ensure no weapon was present. The judge also held both searches were objectively reasonable. The judge accepted the officer’s evidence that he conducted the pat-down search due to a concern over concealed weapons. In applying a reasonable suspicion standard for the safety searches, he found that “reasonable grounds existed to conduct a safety search of both Mr. Webber and the centre console area of the vehicle” when Webber was first detained and the initial police records check was made. In other words, the reasons for both the pat-down and console search were the same. As for the second police records check, it only served to “bolster” or reinforce the initial grounds and provide additional facts to support the console search.

The judge also held that safety searches may legitimately attend investigations of MVA violations and need not be confined to the person. The search of the console was part of the safety search and this search only became a drug investigation when the drugs were discovered. Both the pat‑down search and console search were minimally intrusive, and the console search was limited to the area of the pulling or stuffing motion. Further, the time between the initial detention and the discovery of the drugs was short, no more than 10 minutes. Since there were no Charter breaches, there was no reason to exclude the evidence under s. 24(2). Webber was convicted on both charges.

Webber accepted that his initial detention and the pat‑down search of his body were lawful in the British Columbia Court of Appeal, but asserted that the trial judge erred in concluding that the console search did not breach s. 8 of the Charter. In his view, among other things, the trial judge improperly relied upon the officer’s evidence that a safety search of the centre console was necessary.
Moreover, he contended that the trial judge erred in law by applying the “reasonable suspicion” standard rather than the “reasonable grounds to believe” standard for determining the scope and necessity of the safety search. He also suggested the trial judge erred by finding his detention during the console search was lawful pursuant to an investigation under the MVA. He suggested that the evidence ought to have been excluded under s. 24(2).

After reviewing case law, Justice Savage concluded that the appropriate standard for a police safety search incidental to investigative detention is “reasonable suspicion.” He noted the judicial debate that has emerged from the Supreme Court of Canada’s decision in R. v. MacDonald, 2014 SCC 3, and whether that case changed the requisite legal threshold for lawful police safety searches from the “reasonable suspicion” standard to the higher standard of “reasonable grounds to believe.”

Webber conceded that his pat-down search was lawfully conducted as incident to his investigative detention. Thus, as the Court of Appeal noted, Webber “must be taken to accept that there were reasonable grounds (on the elevated standard) to believe the pat-down search for weapons was justified.” Since the trial judge concluded that both safety searches were justified on the basis of the grounds acquired during the initial detention and the first police records check, the information learned during the second police records check was not material to the outcome of whether the console search was reasonable.

Additionally, the Appeal Court too found there was no error in the trial “judge accepting the police officers’ evidence, including their evidence about their safety concerns arising from both what they observed and their knowledge of the local circumstances.” Justice Savage held the “the officers’ subjective concerns were objectively reasonable,” and “both officers had observed the pulling or stuffing motion, which was not related to procuring a driver’s licence arising from the stop.”

Webber’s argument that the police did not continue to have the authority to detain him and conduct a safety search of the centre console after they had decided not to issue him a ticket for contravening the MVA before conducting the console search was rejected.

“In my view, the continued detention and search of Mr. Webber’s vehicle after the officers decided not to issue a ticket under the Motor Vehicle Act was authorized by law,” Justice Savage said. “Police have the authority to detain individuals and conduct searches to prevent avoidable harm through brief and minimally intrusive searches, which are not necessarily restricted to physical pat‑downs. The powers of investigative detention and search incident thereto are lawfully exercised where the police have reasonable grounds to suspect it is necessary to ensure safety, even if the reason for the initial stop is not a crime. The authorization to conduct a brief, focused protective search, as was done here, does not end at the point in time that charging decisions are being considered or made.”


Related
Handcuffing did not eliminate safety concern
Inventory search of laptop bag in towed vehicle lawful
Factors leading to arrest to be viewed cumulatively
What can your smartphone do? Secure body worn cam functionality in mobile devices • WEBINAR

1 Comment » for Safety search of vehicle lawful during traffic stop