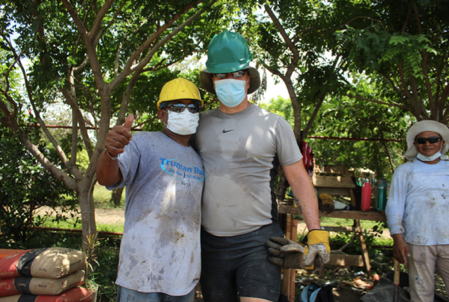 Mark Radke with the SchoolBOX construction team in Nicaragua.

Heroes y Martires de Nandaime School in Nicaragua opened on Nov. 4, 2019, and one of the three classrooms was sponsored by retired Ontario Provincial Police (OPP) Sgt. Mark Radke, who recently travelled to the country to assist with the construction.

Radke was a police officer for 30 years before his retirement in 2018. Unlike many people have a hard time adjusting to retirement, he was eager to have more time to give back to both his local and global community. He has chosen to take this new phase of his life to build a new school in Nicaragua with SchoolBOX.

As an OPP sergeant and avid traveler, Radke said he has always been aware of his good fortune in comparison to the many people worldwide who struggle to meet their basic needs. He saw charity work as a natural continuation of his career supporting the community but was not sure where to start. He just knew that he wanted to help children and he recognized that education is the key to breaking the cycle of poverty.

Radke decided SchoolBOX was right for him after almost a year of research. He appreciated that SchoolBOX presents a “specific mission to build schools and libraries in Nicaragua, maintains low overhead costs and deliver results as he could see from the growing list of schools they had built.”

As a cancer survivor, Radke has seen the challenges many people face if they do not have family support throughout their illness. As a result, he also spends his time driving cancer patients to their doctors’ appointments with the Canadian Cancer Society.

Since getting involved with SchoolBOX, Radke has donated $23,000 to build one of three classrooms at the Heroes y Martires de Nandaime School. Prior to reconstruction, this school had been falling apart. The roof leaked when it rained, pieces of the wall blew off with strong winds, and a wooden beam had fallen inside — thankfully while the children were playing outside. SchoolBOX recognized that this was an unsafe and unfit learning environment for the children of Nandaime and they needed donors like Radke to start construction.

Once construction was underway, Radke said he was keen to join the boots on the ground to see the progress first-hand. Although he had witnessed poverty in his previous travels, it was a different experience to spend a full 10 days in the village and join the local’s daily lives. He saw that the school was the central hub of the community and acted as a gathering place for children and adults of all ages.

The whole community was immensely grateful for the support in rebuilding their school. Parents would join in to help the construction team whenever they could. Radke said he was especially inspired by two young girls who “eagerly joined in on the work to help build their own school.”

Mark and his wife, Juliana, have written a message to the community which has been translated to Spanish and made into a plaque for their classroom. The message reads:

It has been an honour and a privilege for us to be able to fund and assist in the construction of your new school. We believe education is the foundation from which to achieve your hopes and dreams and to improve one’s life, family and community.

This contribution helps provide a safe learning environment for the children of all 120 families in the Nandaime community for many years to come, according to SchoolBox. While everyone wishes they could make such a generous gift, Radke is quick to point out that even small gestures can have a big impact.

He recalls an afternoon in Nicaragua when he saw an ice cream cart approaching and wanted to get a few people a special treat. With the help of Steven Cotnam from SchoolBOX, he gathered all the nearby children and the construction crew to choose their ice cream. Radke ended up purchasing 51 ice cream treats which cost approximately $15 U.S. Small gestures and contributions can bring so much joy to those in need.

“It doesn’t take a lot for us to help out and make a big difference,” Radke said. To learn more or sign up for a volunteer trip of your own, visit https://schoolbox.ca.

SchoolBOX has built 111 classrooms, 84 libraries and 61 washrooms in Nicaragua and serves over 20,000 students and teachers in 110 communities on an annual basis.

Find an earlier story on Radke from Blue Line here.

Ilham Reda is the marketing & community outreach manager for SchoolBox

Related
The weight of the uniform: post-traumatic stress disorder in law enforcement
Ontario Police College: Then and now
Forensic mechanics: The science of processing collision scenes
Retirement: The loss of a sense of belonging