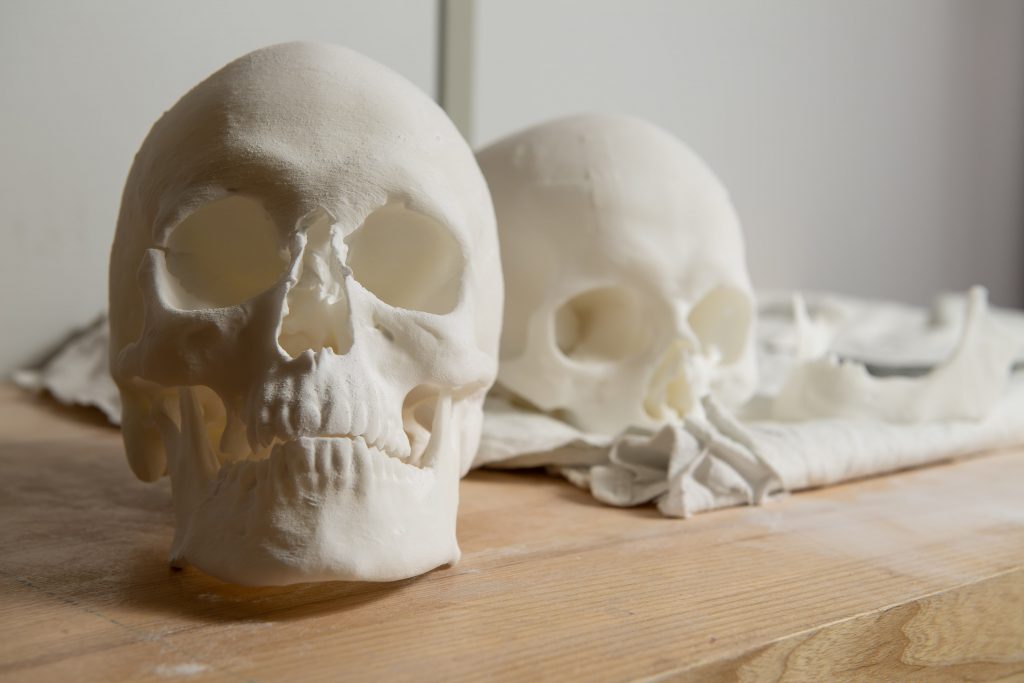 Tom Kay from National Research Council is unveiling the 3D print of a skull that had been previously scanned in British Columbia then printed in a 3D printer in Ottawa. Photo: Serge Gouin, RCMP-GRC

There are currently over 700 unidentified remains in the RCMP’s national database of missing persons and unidentified remains. With the help of a unique partnership, the RCMP announced last week it is giving a face to some of these people, in the hopes of unlocking the mystery of who they are.

For the first time, the RCMP is partnering with the New York Academy of Art to reconstruct the faces of Canadian unidentified human remains. From January 6 to 10, the Academy is hosting a forensic sculpture workshop, using 3D‑printed versions of 15 real skulls supplied by the RCMP.

The 15 Canadian skulls are all male, and were located between 1972 and 2019. These particular skulls were chosen for this initiative because they were in the best overall condition.

Academy students will put their anatomical knowledge and artistic skills to work in order to reconstruct each of the faces with clay.

“The RCMP is very excited about this partnership with the New York Academy of Art,” said Chief Supt. Marie-Claude Arsenault, Officer in charge, Sensitive and Specialized Investigative Services, RCMP. “This was a unique opportunity to have 15 Canadian faces reconstructed in a single week. The Academy is world-renowned for its teaching techniques, and we look forward to benefitting from the work of its talented students. We hope to give a face and a name to people whose loved ones don’t know what happened to them.”

The skulls’ journey to New York began with the British Columbia Coroners Service and the Nova Scotia Medical Examiner Service, which provided the skulls for this initiative. Technicians from the National Research Council (NRC) flew to British Columbia and Nova Scotia to scan the skulls. Back in Ottawa, NRC specialists printed 3D versions of the skulls using powdered, laser-melted nylon. The skulls were printed in batches of four, with each batch taking approximately 48 hours to complete, including cooling time. Once cooled, the skulls were cleaned using a combination of brushes and compressed air to remove residual nylon powder. NRC staff used dental picks when necessary to clean the tiniest nooks and crannies.

During this week, the RCMP will be documenting the entire process on its social media channels, beginning with the scanning process and ending with a completed reconstruction. Following the week-long workshop, 15 new faces will be revealed and will be featured on the Canada’s Missing website, in the hopes of generating tips from the public that could tell us who they are and giving some closure to families.

The RCMP hopes to eventually bring this type of workshop to Canada, to build facial recognition capacity here and bring more people home.