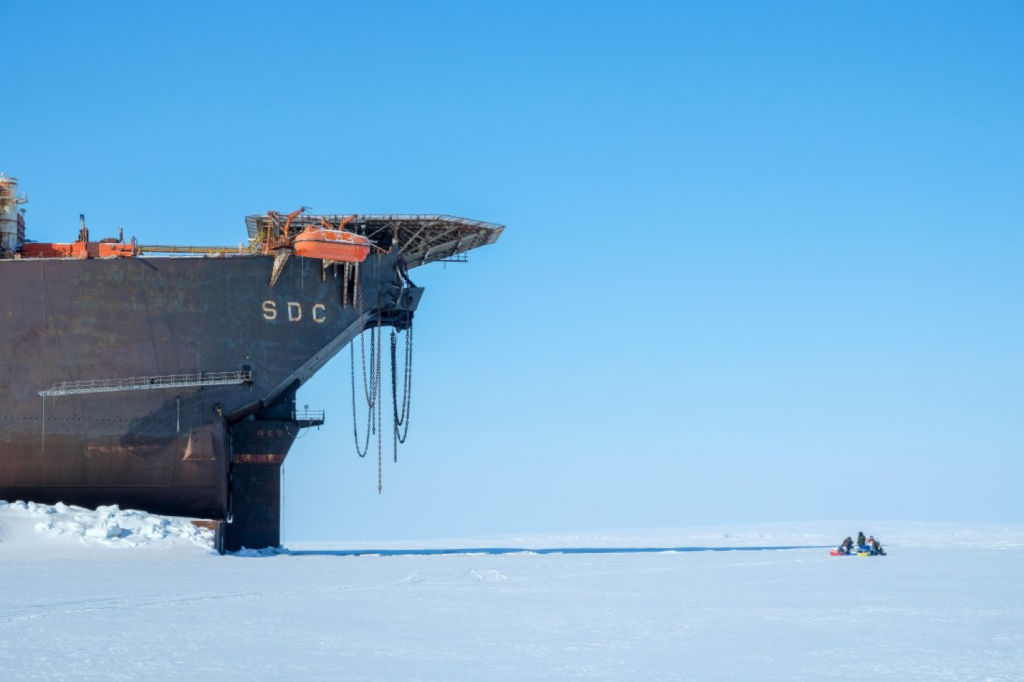 Herschel Island, or Qikiqtaruk, was a site used by Inuvialuit for thousands of years and a trading post for whalers in the late 1800s. It is also home to the first Royal Canadian Mounted Police (RCMP) detachment in the Canadian Arctic.

After the collapse of the whaling industry in 1907, most of its American population left; the Inuvialuit followed in the coming decades. In 1964, the RCMP, the only permanent population remaining on the island, left as well.

At first glance, Herschel may appear abandoned, but upon further inspection, it’s clear that life is thriving. In the summer months, the island is blanketed with wildflowers, the coast is home to the largest colony of black guillemots (a seabird related to the puffin) in the western Arctic, and it is the only place in the Yukon where polar bears can be found.

Interspersed with the caribou and muskox, you will also find the occasional human. Herschel Island is now a Territorial Park and has been since 1987, the first of its kind in the Yukon. The Inuvialuit have continued to use the land for traditional activities and the park rangers who manage the area eagerly share the history of the island with visitors. 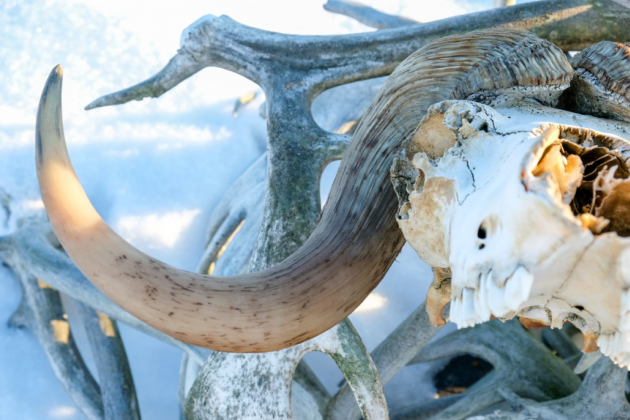 A slightly rarer sighting is that of the Yukon RCMP officers who make the trek up to Herschel every two years. Departing from Old Crow, the territory’s only fly-in post, members pack up their sleds and skimmers and make an unforgettable trip to Yukon’s most northerly point. This memorial patrol started in 2004 in partnership with the Vuntut Gwitchin First Nation as a celebration of the last RCMP dog-team patrol in 1969.

In April 2019, Const. Erin Gregorash and Const. Emma Leslie completed the 2019 edition of the patrol, along with two Yukon Conservation Officers, Ken Knutson and Kirby Meister. It took them four days on snowmobile to reach the island from Old Crow, Yukon. 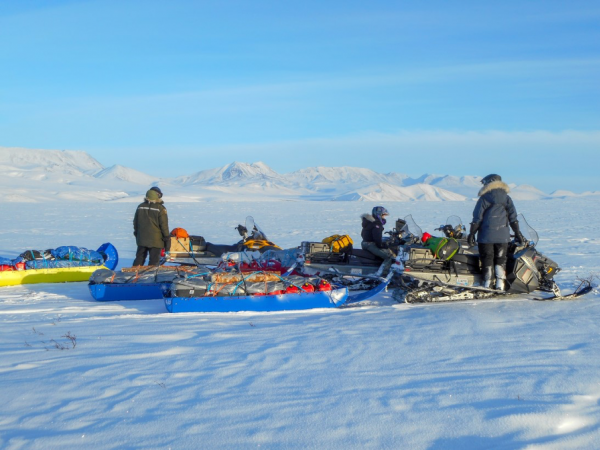 Patrol members with their sleds and skimmers heading south in the Blow Mountains.
Photo: RCMP Yukon

Yukon weather is notoriously unpredictable and it’s no exception in the far north. As the patrol was ascending Blow Pass, it wasn’t surprising that the wind began to blow. The ensuing white-out forced them to turn around and drive 30 kilometres back to make camp.

“If Mars was a white planet, that is where we were. The rolling mountains and hills of white snow surrounded us. Not a tree in sight,” notes Const. Gregorash. 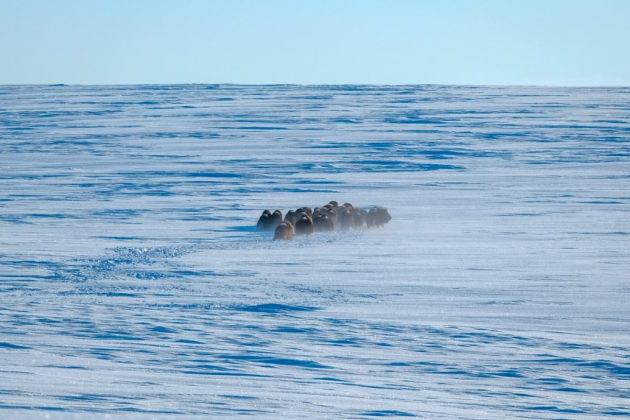 Three full days of travel brought the group of four to the Yukon’s coast. Even in the seemingly desolate far north of Canada, human-made structures can still be found. Alongside the seals enjoying the sun, the Cold War era DEW line (Distant Early Warning) is visible, along with an oil rig frozen into the ice.

The afternoon of day four brought their arrival to Herschel Island. After a much-needed rest, the conservation officers and RCMP members took a tour of the island. Sights of snowy owls, arctic foxes, muskox and even a polar bear were a welcome reward for their journey. As part of the patrol, members also visited the former North West Mounted Police detachment (NWMP), paid respects to two NWMP graves, and checked to see if any maintenance needed to be done to the graves or fragile wooden headstones.

Sgt. Eardley Aubyn Selig, #3948, died of an unknown infection on Jan. 30, 1911, while Const. Alexander Lamont, #5548, died of typhoid fever on Feb. 16, 1918. Both members died while they were serving on Herschel Island, and their final resting places are located side-by-side. 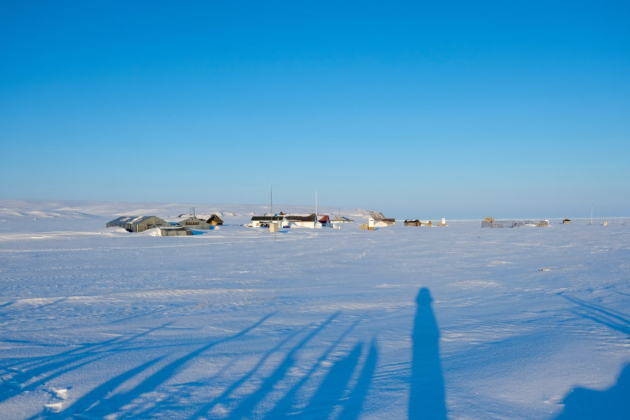 The next day, the RCMP and conservation officers were joined by a Parks Canada patrol. Park Warden Matt Garnett and Parks Resource Management Officers Joe Costa and Mervin Joe were in the area to patrol nearby Ivvavik National Park. Following in Herschel Island tradition, the newly formed “Tri-Service North Slope Patrol” signed a piece of driftwood and hung it on the wall among the others.

A long two days of travel stood ahead and an early departure from Herschel was called for. After 820 kilometres covered and over 44 hours total spent on their sleds, they arrived back in Old Crow.

“The patrol to Herschel Island was the experience of a lifetime and something I’ll never forget,” Const. Leslie said. “The week was absolutely incredible – challenging – but incredible. The scenery, terrain, wildlife and company were second to none. It was an amazing opportunity that I’ll cherish forever.” 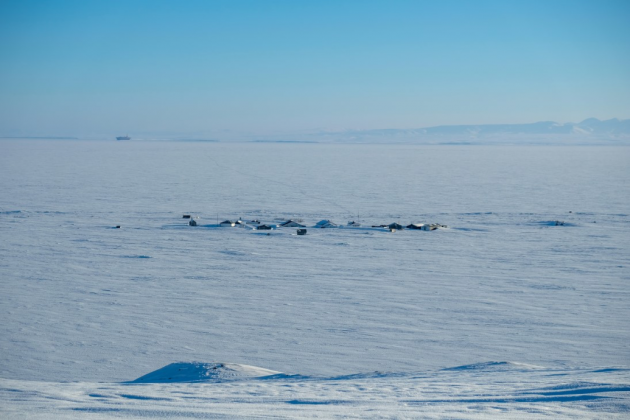