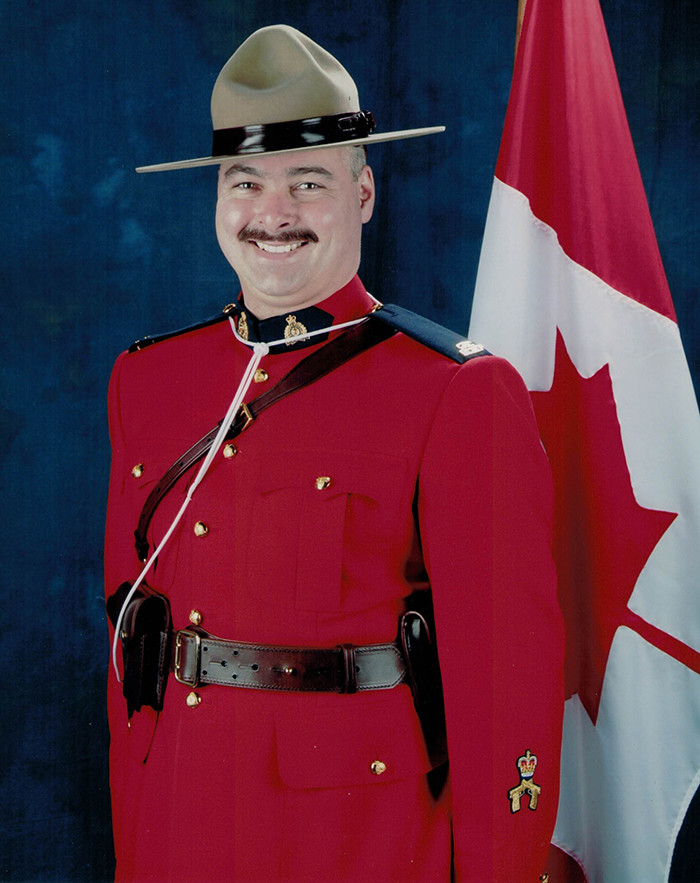 WINNIPEG — Dozens of Winnipeg police vehicles parked in front of the city’s RCMP headquarters with their emergency lights flashing in silence, as officers paid tribute to a Mountie who died in a crash last week.

A video of the sombre memorial to Const. Allan Poapst, which took place Saturday night, was posted online by the Winnipeg Police Service.

Winnipeg police officers and cadets can stood in rows in front of a statue of a Mountie that’s a monument to officers who’ve lost their lives in the line of duty in Manitoba.

Poapst, who served with the Court Liaison Unit, was returning to the office late Friday afternoon on Winnipeg’s Perimeter Highway when police say a pickup truck heading the other way crossed the median.

It collided with Poapst’s RCMP vehicle and he was pronounced dead at the scene, while two people in the pickup were taken to hospital.

The Winnipeg Jets and the Winnipeg Blue Bombers — which RCMP say were teams that Poapst was a dedicated fan of — also posted messages of condolences online over the weekend.

“Our hearts go out to Cst. Allan Poapst’s family in this incredibly difficult time. On behalf of our entire organization, we are so deeply sorry for your loss,” the Blue Bomers said on Twitter.

RCMP Assistant Commissioner Jane MacLatchy told a news conference Saturday that Poapst was a proud father of three teen daughters and was an avid football and hockey fan.

MacLatchy said the investigation into the crash was ongoing but that conditions at the time were “atrocious.”

An online fundraiser has been established to raise money for Poapst’s daughters’ educations.

This report by The Canadian Press was first published Dec. 15, 2019.