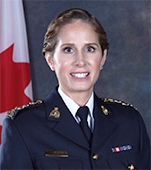 She began her RCMP career in 1992 as a general duty police officer in “E” Division (British Columbia). Boudreau has worked as an undercover operator, was a member of the Tactical Troop and became a critical incident commander, attending many calls with the Emergency Response Team. She has also served as Aide-de-Camp to Alberta’s Lieutenant Governor and is a recipient of the Queen’s Diamond Jubilee Medal and the RCMP Long Service Medal.