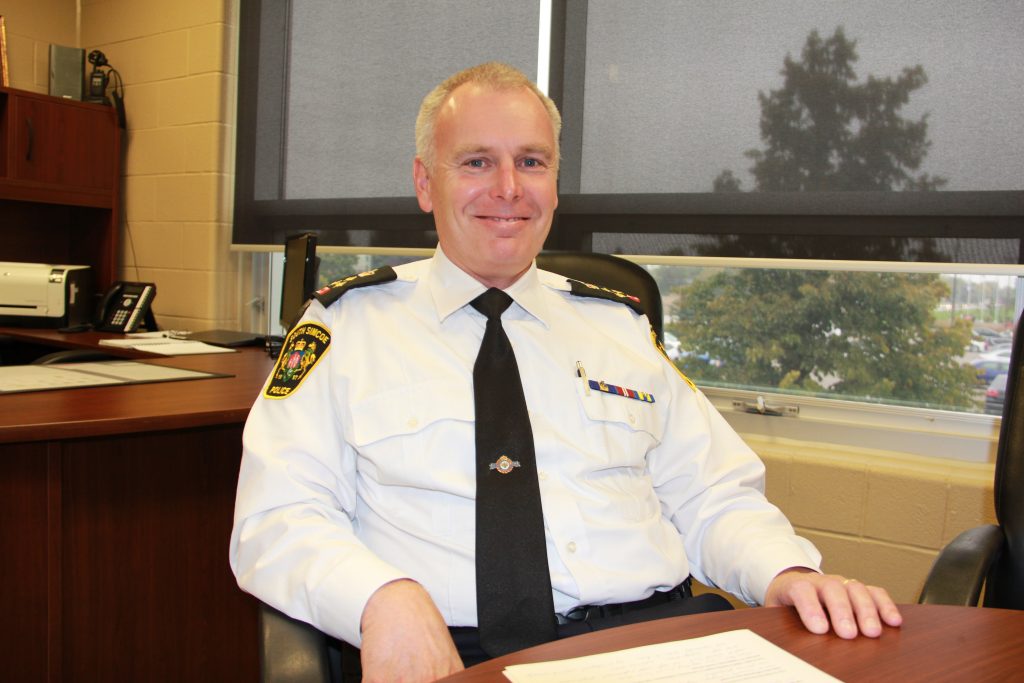 Q: What does 20 years of South Simcoe Police history mean to you?
You can’t move forward without knowing the past — and making sure you’re not going to step on the same landmines people have stepped on before you. That’s why our 20th anniversary dinner [held in October] was so important. I was able to meet a lot of people I’d heard about, people who have made a contribution to where we are today. It’s true that the greatest asset of any organization is its people. This has been an opportunity to embrace the past but with a forward-focus lens at the same time, asking, “So where do we want to go from here?”

Q: Chief Rick Beazley, who retired earlier this year, was praised for keeping budgets in line. How do you plan to do the same?
It’s going to be difficult. Rick came here at a time when there was talk of costing and the OPP taking over. They really had to be budget-conscious and make this a fiscally accountable organization. They’ve cut so much meat off the bone, there’s nothing left. We’re now going to have to put some of the meat back on to be able to address what we’re starting to see in the community — violent crime, some gang activity, some drug activity.

Our police services board has been very supportive when it comes to looking at what we need to add back on to address some of those trends and to be creative in doing that — not just throwing people to the frontlines. Let’s look at teams that can address the core concerns of the community and some of the social disorder issues going on. Let’s see a civilization of some of the roles — adding admin support positions so our officers can spend more time in the street.

Q: You’ve been called an expert in community mobilization. Tell us more.
We’ve had the mobilization model here in policing since 2007. It’s not something new but we’re all still catching onto it. Everyone has his or her own view of what community policing is. In Ontario, it’s a model of mobilization engagement for community policing. The structure is built around engaging with your community at different times and recognizing how to mobilize them to action, how to deal with at-risk behaviours.

What is really encouraging about the new model is it talks about safety and wellbeing. If it’s just about safety, it’s all about the police. The police have a mandated responsibility to ensure the community is kept safe. When you bring in wellbeing, it adds the need to collaborate with partners that are responsible for well-being — social services, education and health care. Our school resources officers, for example, are there to build relationships. That’s all about this model. Here in South Simcoe we’re created a community mobilization unit and how we bring that to life over the next year is going to be really exciting.

Q: You are a graduate of the FBI National Academy. What was your biggest takeaway from that experience?
I met people from all parts of the world and those contacts have been phenomenal. One of my best friends from the Academy is from Australia, where policing is very different, and so it’s an opportunity to see what they’ve tried and what could work here or what didn’t work for them and why. You learn everything is built on relationships.

Q: What is needed in police leadership right now?
We are going to have to stand up for our profession, consider inviting people in to look at our budgets and show them we are a transparent organization. Policing is getting knocked down pretty badly right now. We need to be accountable and communicate we’re proud of our people.

It’s going to be a tough time to be police leader in next 5-10 years. I’ve had people say to me, “You really want to be a police leader in these times?” Yeah, I do. Push us, challenge us; if we’re not up to the task, then we shouldn’t be chiefs.