Chief Julia Cecchetto began her role as head of Kentville Police Service last October, after 27 years with Halifax Regional Police. As the first female police chief in all of Nova Scotia, she shares what it’s like to carry that torch. 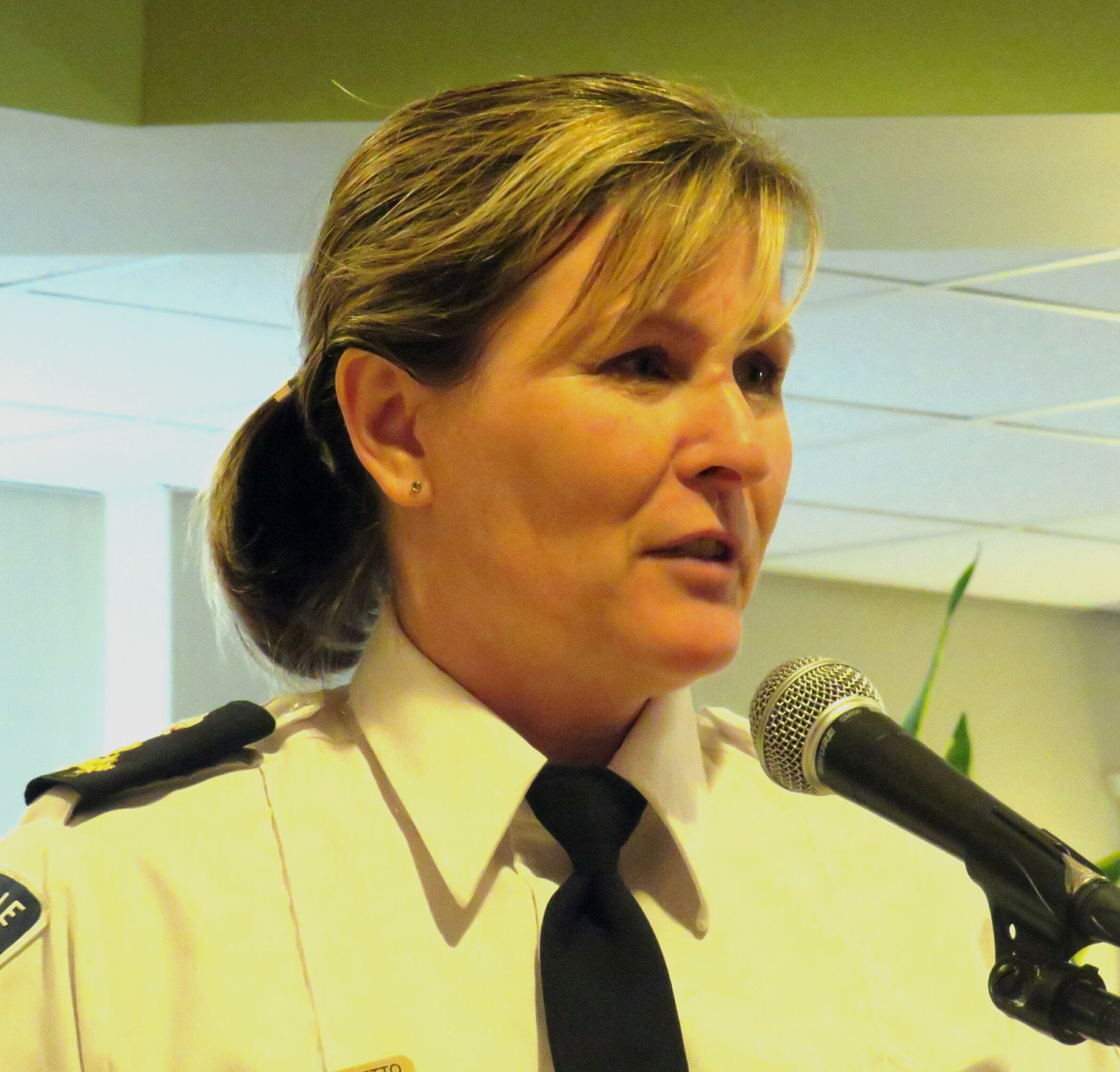 Q: How did you come to be the new police chief of Kentville?
I was eligible to retire a year ago so I began looking at jobs. One day [Halifax Regional Police] Chief Blais sent out the posting at the Town of Kentville. I thought I’d throw my name in the hat. I actually live down this way and I grew up in Brooklyn, N.S. (in western Hants County, near Windsor). I’ve always been drawn to a more rural style of policing.

Q: You’re the first woman to be named chief of a Nova Scotia police force. How does that feel?
Whenever they make a fuss over me, I do like to point out there are a number of women in the Royal Canadian Mounted Police who are chief supers and hold very senior positions throughout the province, so I want to be fair to them. They have that rank already; it’s just the RCMP rank structure is different. So we have some very strong women in law enforcement here in the province — I just happen to be the first female chief municipally speaking.

At first, it was an incredible amount of pressure. I now represent not just women but also diversity. I’ve always fought for women’s rights within policing so in a way it felt like breaking through that glass ceiling, but at the same time there was this weight of everyone now watching and waiting.

The other female chiefs here in the Maritimes (Leanne Fitch in Fredericton, N.B., and Suzanne Themens in Grand Falls, N.B.) have been supportive and offered their assistance. That has been a great help.

Q: What are some of the differences between Halifax Regional and Kentville that have been interesting for you?
In Halifax, there are various departments and sections, such as finance and human resources. Here in Kentville, I am all of those sections. An inspector and myself are the only ones to oversee all of the management roles. If there’s a purchase order, I do that. That’s very new and so this is an area where I sometimes reach out to my friends in the policing community to ask for help.

Q: How did you know you weren’t quite ready for retirement?
I have two daughters in school and I’m only 49; I still consider myself young and healthy. I wanted a change but I still have something to offer. I’m not ready to go home and just read books yet.

Q: What is your biggest priority now as chief?
Kentville lost two positions over the past two years due to budget cuts. They lost an investigator position and a community officer. Investigations can’t stop but the community side of policing had somewhat slowed right down in terms of sitting on community boards, etc. My priority right now is adjusting to the staffing cut and figuring out how we can do all of that because the work still needs to be done and it’s important to be at that community table, especially in rural policing.

We’ve come up with a plan that officers on shift will all take some ownership of community policing. For example, one will take on the school and the work involved in the school programming, policing the traffic there, etc. Another will be involved in the mental health board within the community. Everyone will have a group of people to look out for.

Q: What is your favourite part about the new role?
It’s all new and different. While that can be unnerving, it’s also invigorating. I’m in the middle of our budget right now, for example, and that’s a completely new skillset — Halifax has a whole section that does the budget. It’s helping me continue to grow.

Q: How did you get into policing?
I’m the oldest sister of four kids and our mother worked night shifts, so I always had a “take charge” nature, you could say. I worked in Toronto for a while with horses but I knew that wasn’t what I wanted for my life. I looked into the military but never followed up. Then, after working with my aunt in the insurance business, I just said to myself one day, “I don’t want to do this; I want to be a police officer.” I called Halifax and they happened to be recruiting so I went down that night and three months later I was in the academy. It all happened really quickly.

Q: What was policing like when you started?
I entered the service in November 1990. I was a country girl who had moved to the city to do big city policing. I found everyone stared at me. I was new and I was different because I was female and they didn’t have very many of us. The style of policing we did then is actually similar to today’s — Halifax was already into community-based policing when I came on board. The calls for service have changed a lot; there’s an increase in youth calls and probably more weapons calls.

Q: What were some of the major challenges you faced?
For every step I took, either a move to a new section or a promotion, there was this rumbling in the background of “you got that because you’re a woman.” It was my own insecurities as well — wondering if I got it because I deserved it or if I was a token. Learning to believe in myself was huge.

I married a police officer and we have two children. So there were two police officers on shift, both with busy careers, and two little girls at home who wanted a parent there for concerts or sports. That was another challenge. In hindsight, the career choices I made for our girls actually gave me the skills I need for this current role and put me on a different career path than I may have chosen for myself in law enforcement.

Q: Any advice to other women looking to launch a career in law enforcement?
This is such a great career. I encourage women all the time to get into it and help them out if I can. Women bring a different perspective to policing that I think that is needed. I saw a video series the other day on social media about female police chiefs across North America and one of the women said, “I had to block out the noise.” That really stayed with me and that’s my advice: block out the noise of “you can’t do this,” or “you’re only getting this because…” Do it because you want to do it.

Q: In your opinion, what is needed in police leadership in Canada right now?
The willingness to adapt or change, and look at other options to keep the community safe. We could easily plant our feet and say, “No, it has to be this way,” but, as the costs of policing continue to rise, that will not solve anything.

Related
“Making sure we have partners at the table:” Q&A with Edmonton’s new police chief
Emergency information at your fingertips
When tragedy strikes Toronto…
Q&A with Chief Andrew Fletcher, South Simcoe Police