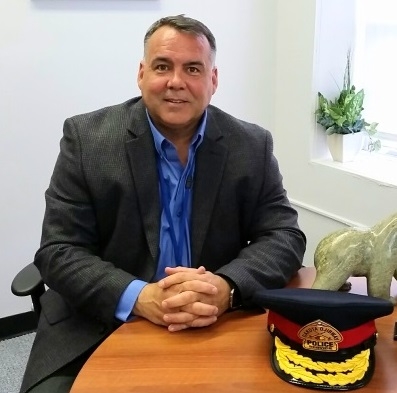 Q: What is your favourite part of the job?
It’s the relationships I have with all those employed at DOPS. I’ve seen a lot of courage, dedication and examples of professionalism. I see the members wearing their badges proudly, diligently supporting their communities. They are out there as role models and they always make themselves available.

Q: What is the toughest part of the job?
As in any organization, it lies in balancing the needs of policing with, ultimately, the money in your bank account. That continues to be a constant theme for many agencies. Frontline officers are always needed. It’s all interconnected: HR issues and funding.

Q: You have worked in several locations. Can you share more about these experiences?
I’m in my 25th year of policing right now and my career has taken me over four provinces and territories. My background is with the RCMP and in fact I’m still an RCMP officer — I’ve seconded to be the Acting Chief of Police at DOPS. The agreement is I’ll be with them for a year or so. I began in 1993 in Nova Scotia. I moved to Newfoundland where I was involved in many different facets of community policing and I was also a polygraph operator. I’ve lived in Iqaluit, where I was promoted to staff sergeant and commissioned to take over the RCMP detachment at Portage la Prairie and the secondment for this role took place on May 15. I’m humbled to be given the opportunity to be a part of DOPS. Being chief here and working with these communities has been the highlight of my career so far.

Q: What has changed at DOPS since its inception?
DOPS has seen tremendous growth. In 1977 it began with nine police officers and one chief. Today we have 36 sworn members and 12 support staff members. A big change I’m seeing that is fantastic, and that we’re encouraging, is the incorporation of a lot of indigenous culture into the criminal justice system. We’re working on partnerships with the province now to develop a more robust youth restorative justice program along these lines. Our goal is to position ourselves as the police service of choice for First Nation communities in Manitoba and others in the province seeking alternatives in policing. Long Plain First Nation and Waywayseecappo First Nation have both chosen DOPS as their police service just within the last two years, so those are big changes for us.

Q: The Dakota Ojibway Tribal Council recently declared a state of emergency due to drug use. What is the situation?
You have to keep it in perspective: DOPS serves six small communities in rural Manitoba, so we’re certainly not seeing the numbers that we are in the big inner cities when it comes to drug use. We haven’t had much interaction with fentanyl but we’re aware of it. We’re more concerned about methamphetamines, as they’re cheap and the effects last longer, and we have seen a degree of rise there. And alcohol abuse is still a major contributing factor to most crime we see. These are national issues; they’re not specific to First Nations communities. We’re all facing the same type of emergency when it comes to the increase of different types of drugs. The good thing about the council’s declaration is they’ve acknowledged that there’s a problem and they’ve announced they need help. And we’re here to support them.

Q: How is DOPS approaching the drug concern?
We have a full time community policing person and she has increased her efforts to educate youth in schools about drug use. Also, we’ve done a much stronger job in the past six months of utilizing intelligence from sources to execute more search warrants. We’re hoping that will improve further and we’d love to see more funding to build a team of people who work directly in intelligence, as information moves quickly from community to community.

Q: What is the council’s plan for the drug treatment centre?
The council of chiefs is covering plans for a centre as well as other future, drug-related initiatives. We’ll certainly support them and we would utilize those resources. I hope [the centre] comes to surface and it becomes available for First Nations people.

Q: What do you see is the future for First Nations policing?
We’re seeing the First Nations communities returning to root beliefs and spirituality. At our 40th celebration event, an elder talked about the move to self governance, including the incorporation of traditional beliefs into how we deal with people who commit offences. I’m excited to see how that develops over the next year.

Q: What wisdom can you impart regarding what it takes to be a successful police leader for First Nations?
When you’re dealing with small communities and smaller police forces such as DOPS, funding continues to be an issue, but you need to be strong and positive for your communities, continuing to persevere when it comes to crime prevention efforts. Encourage your members to take a grassroots approach when it comes to getting out into the communities and partnering with groups to deliver more effective service. Secondly, that one-on-one relationship is so important, especially in First Nations communities. I’ve met all the chiefs and councils. When you have that relationship, they understand you care about the community and then it makes policing smoother. They see it’s not just a job for us — it’s more of a calling.

Q: What advice do you have for people who want to advance their careers in policing?
Keep in mind: until you’re ready to serve people, you’re not ready to lead them. You have to be available and willing to be mentored along the way. Sometimes people can get defensive when they’re given guidance but I have always been very open to receiving direction and criticism, and incorporating the changes I need to. If you have a good attitude and you’re willing to learn, you’ll go places.