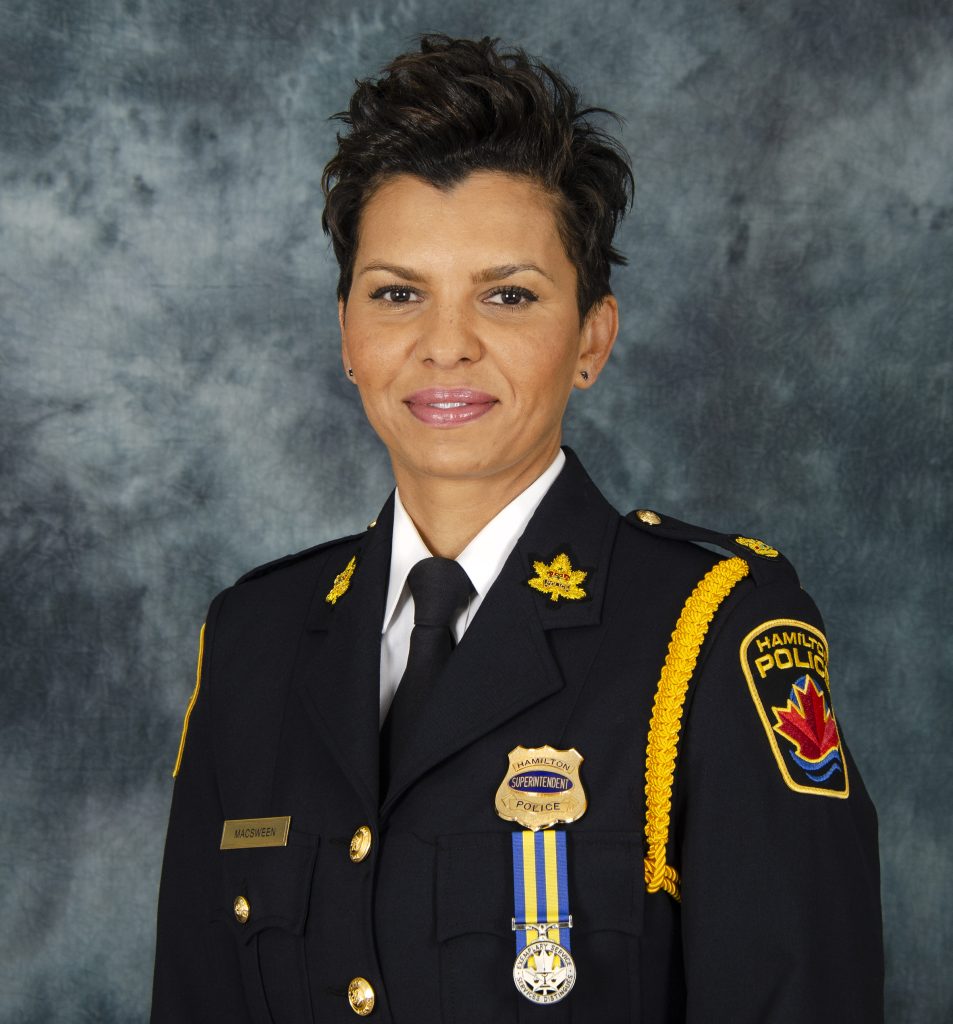 In a recent Blue Line, The Podcast episode, Hamilton Police Service Supt. Treena MacSween joined editor Brittani Schroeder to discuss the challenges she has faced, and still faces, in her chosen profession, and her mission of gender diversity and attracting more women to law enforcement.

Q: Congratulations on being appointed Superintendent! Can you tell me what this means for you and your community?

As you get along in your career, you realize how things impact your community and that includes everything from recruiting the right people to promoting them. Being appointed superintendent is a really proud moment for me and my family, and the gravity – the responsibility – of this promotion is not lost on me.

A few years ago, I was asked to help mentor some female students at a local high school. The students had gone to their teacher and asked to hear from a black, female officer. I’ve gone back four years in a row, and now I take other black, female officers with me. I am such a big believer that if you can see it, you can be it. I tell those students that if I can stand there in front of them, they can do it and be a part of the team as well.

It’s funny, because when I earned this promotion, I didn’t like all of the attention it received. Yes, I am the fourth woman and first person of colour to hold this position at the HPS, but I didn’t want to focus on that. It was my sister who really made me see that it wasn’t about me. This promotion is about all the women who will come after me.

Q: Can you tell me about some of the challenges you’ve faced throughout your career?

On my first day as a recruit, I showed up to the class with all the other recruits to introduce myself, talk about my education, my volunteer work, and so on. I was so excited, because that was what I’d wanted for so long. While I was at the water fountain, a male recruit came up to me and said, “I can’t believe they hired you, and you’re only 21.” I was really taken aback by his comment. He then said to me, “Yeah, well, the only reason you got hired is because you’re black and female.”

I just stood there, stunned, as he walked away. When I walked back into the classroom, it hit me: I started thinking, “Who else in this room thinks that way?” and my next thought was, “Is it true?”

I would say this has been my biggest challenge because I allowed that self-doubt to get in my way, and cause noise in my own head for probably the first 15 years of my career. I think back now, and I literally shake my head because I can’t believe that I allowed the words of someone I didn’t even know to impact me for so long. I finally realized, yes, I am a woman; I am a person of colour; I am different, and I need to embrace that. It was a real aha moment for me, because I never want any other female or male to be in that situation and allow someone else to have a negative impact on their future career.

Q: You’ve said your personal mission is to increase the gender diversity within policing. What do you think needs to be done for this to become a reality?

We have had women in the HPS for 62 years, and in that time, there have only been four female superintendents. I have been wondering, why? I have asked women on the force, and a large reason is because they just weren’t seeking higher levels of promotion, due to balancing childcare or eldercare in their personal lives. They told me they just didn’t have the support in their corner telling them they could get it all done. So I will be that supporting person, because I know it can be done.

I also want to look at positions that are typically male dominated. A great example is our tactical (TAC) team: in the history of the HPS TAC team, there has only ever been two female members, Sgt. Mary Sullivan and Cst. Margaret Couch. We hadn’t had a female apply to be on the TAC team in 14 years. I see these strong, fit females in our gym who no doubt would be able to do this job, so why aren’t they considering this role? I think it goes back to how some of us felt in high school: I can’t sit at the table because no one else there looks like me.

I spoke to some women, and I found out that they want to complete the testing in a comfortable atmosphere, but it’s also about getting over the challenges and hurdles in their own head. We then set up two sessions in the gym, and we invited 14 women to come in, put the heavy vest on, and do the exact same testing that is required for anyone on the TAC team. These women blew me away, because they didn’t just run through the course, they killed it. It was great to show them that they could get this done. For the first time in 14 years, we had two women apply to the TAC team.

So we can see that women are interested in higher-ranking positions, they just need to feel comfortable in applying and feel like they are welcome on the team.

Editor’s Note: This interview has been condensed and edited for clarity. To listen to the full episode, visit blueline.ca/podcasts.