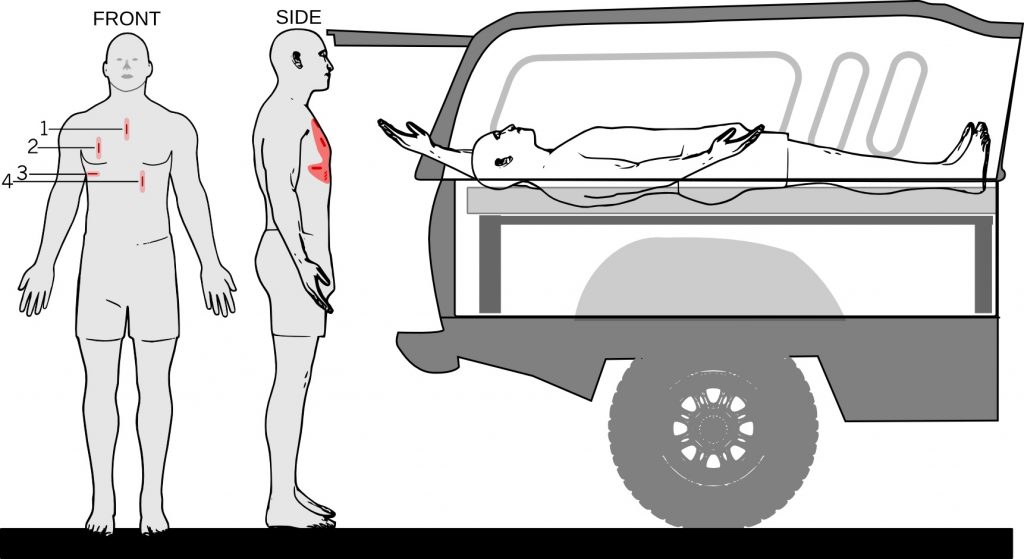 A picture analysis of the defendant’s account of the events.

Cold case homicide investigations are often challenging. A recent case that the Luzerne District Attorney’s Office and the Pennsylvania State Police brought to our team was no exception.

The defendant, Mr. Daniel Holtslander admitted that he had stabbed his friend (and fellow homeless person), Mr. Kurt Swan, multiple times. He also confessed to dumping the body and to destroying evidence. Holtslander claimed the killing was done in self-defence under the castle doctrine of Pennsylvania. This statute does not apply in Canada, but there have been similar arguments for self-defence made in cases such as this.

When interviewed by homicide detectives, the defendant claimed to have been laying on his back, sleeping in the bed of his pick-up truck with his head toward the rear. Since this was also his home, the truck was legally defined his ‘castle’. Holtslander claimed that he heard someone open the rear bed door of his pick-up and feared for his life. Without looking, he armed himself with a knife in each hand and stabbed overhead, superman-style, killing his friend. With no hard evidence beyond the body, the truck and an identification of the murder weapons, we were asked to determine if Holtslander’s account was supported by the few facts that existed.

The body had four stab wounds, all located on the torso. The wounds gave a general sense for the angle of each thrust but decomposition made it impossible to determine the exact blade orientation for each strike. One of the fatal blows was a deep thrust that punctured the sternum and went into the heart. With soft tissue injuries being problematic, we focused on the bone impact on the sternum and another stab that caused a rib fracture.

Fortunately, the homicide investigation team did a great job of documenting the truck. They took a high-resolution laser scan that included the large amount of junk and clutter within the truck bed. Most importantly, the scan of the mattress that Holtslander said he was laying on, gave us his exact height relative to the victim.

The most critical piece of evidence was the defendant’s highly detailed account of what he said happened. This gave us his stated position, as well as the very specific overhead stabbing motions that he claimed caused the murder.

When combined, all this evidence raised a key question: Were all wounds inflicted from one position as Holtslander claimed or was there more to the story than this?

In the United States, the castle doctrine allows a self-defence justification for using lethal force against an intruder in your home.

Human flesh and bone have known resistance properties under specific testing conditions, such as bending, but the exact penetration force of a large hunting knife through the sternum could not be found. To determine this, we constructed a synthetic sternum that was validated to have biofidelic (similar to live human) properties. The knives were attached to our drop tower to let gravity plunge them from various heights through the synthetic sternum and into calibrated ballistics soap forms which mirrored the density of human flesh. This gave us a baseline measurement for the penetrating force of the weapons. Similarly, we used literature and tests to determine the force needed to fracture the ribs.

One fact that emerged was that the rib fracture was caused by the impact of the knife hilt on the victim’s chest, not the blade—a strong indicator that extreme force was used. This could never have been determined without biomechanical testing because months of decomposition had long since erased all surface signs of bruising and abrasion.

Once the stabbing forces were known, we could then test whether the defendant could have generated the wounds with the specific stabbing motions that he described. This led to a second series of tests on the forces generated by various stab thrusts, knife positions and angles. The tests showed that the strikes that the victim described were unlikely to penetrate the sternum and impossibly low in force when compared to the threshold needed to fracture the rib. 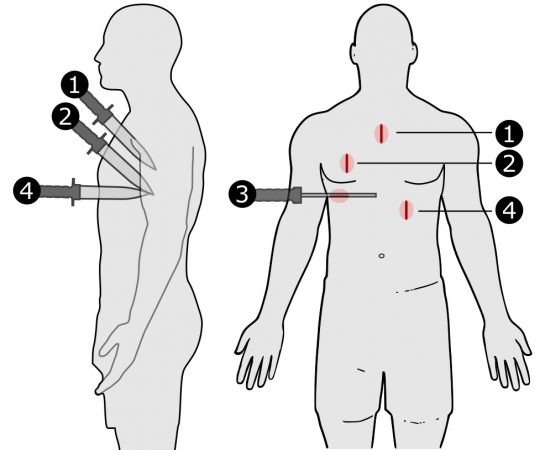 The most critical piece of evidence was the defendant’s highly detailed account of the incident.

When we compiled the data, we concluded that it was “beyond a reasonable doubt” or (in “science-speak”) 95 per cent confident that at least one of the lethal knife thrusts was generated outside of the truck bed and the castle defence theory. Other stabs could have been argued and probably proven with further testing but one was enough to directly contradict the story the defendant told to detectives.

When the scientific analysis was turned over to the defence team, the castle defense doctrine was withdrawn. It was replaced with a guilty plea for third degree murder.

In this case, the detectives did a great job of documenting the crime scene and of locking the defendant into a narrative that could then be scientifically tested. This allowed the team to prove what was possible within the defendant’s account of events and, more importantly, what was not.

Geoffrey T. Desmoulin, PhD., RKin., EngL., Principal of GTD Scientific Inc., holds two degrees in both Engineering Sciences and Kinesiology, allowing him to predict human injury in any environment. He was previously an Emergency Medical Technician, firefighter and military reservist. Since 2009, GTD Scientific Inc. has garnered Federal and Supreme Court qualifications and an extensive international client list within the legal and law enforcement communities. gtdesmoulin@gtdscientific.com.

Related
One Foot in Front of the Other: The journey of a million steps