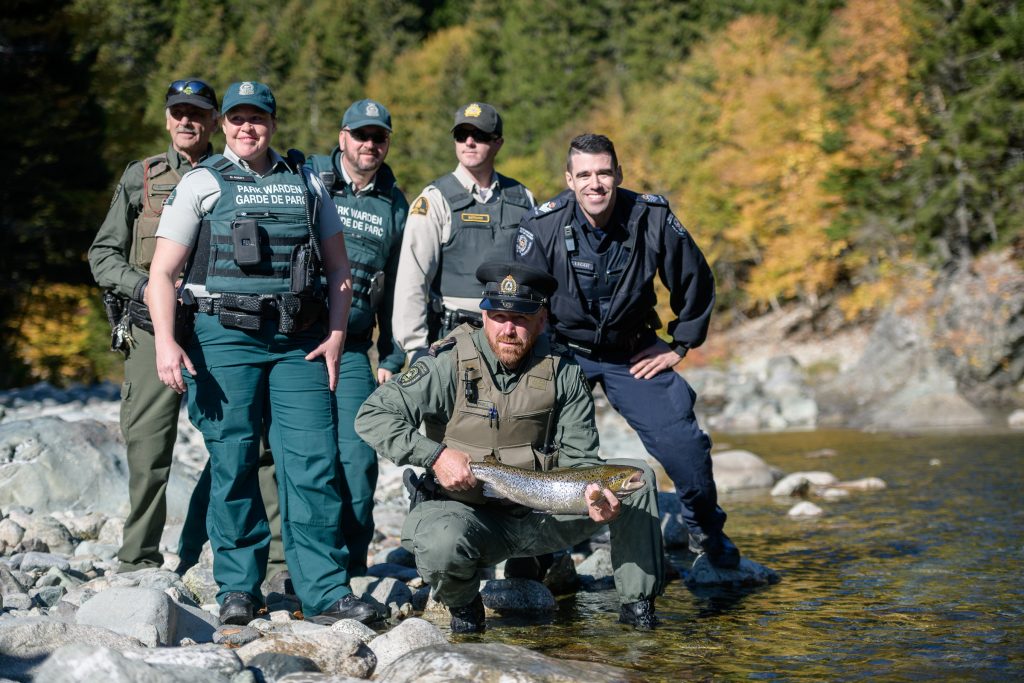 Unrolling a thick sleeping bag on to a brown vinyl mattress, Parks Canada Warden Officer Dominique Audet prepares to stay the night at Black Hole Cabin — a remote warden cabin along the Upper Salmon River in Fundy National Park in New Brunswick. She has spent the afternoon patrolling the river and, in the morning, she will be meeting up with Fisheries and Oceans Canada for a joint patrol further downstream.

The name “Black Hole” refers to a salmon pool about halfway up the Upper Salmon River. At the height of salmon fishing in the early 1960s, Black Hole and its surrounding pools — Slide Pool, Elbow Pool and Jiggers Rock Pool — were prime locations for fishing and poaching. At the time of Fundy National Park’s establishment, wardens would hike down, patrol the popular salmon holes, and hike back up to the front country the same day.

Eventually, a warden cabin was built overlooking the pools so that there could be enforcement at the river for long periods of time. This cabin and the need for an enhanced law enforcement presence became increasingly important as it wasn’t long after this that the population of Atlantic salmon in the inner Bay of Fundy began to rapidly decline. Over a period of approximately 20 years, the salmon population dropped from 40,000 fish to fewer than 250. The protection of this iconic resource became crucial.

In the morning, Audet packs up and begins her patrol downstream. She stops to replace memory cards and batteries on all five trail cameras. As she patrols around the pools, it’s clear she knows every hiding spot and every rock to turn over.

“I’m looking for any evidence of fishing or poaching; this could be small hooks, fishing line, even finding blood or an abandoned campfire pit,” she says. “Evidence like this, if connected to a photograph from a trail camera, will be investigated and could lead to charges being filed and possible convictions.”

This patrol was brought on by a foul-hooked salmon, which biologists discovered during a snorkel survey. The foul-hooked salmon was a female who had returned to the river to spawn but, unfortunately, an unlawful angler hooked the fish in its side in efforts to jig it out of the pool.

To help ensure the protection of salmon during their fresh water life stage, local law enforcement agencies are working with park wardens as part of the Atlantic Salmon Law Enforcement Coalition, which was established in 2015. Together, the coalition has increased joint patrols and surveillance on inner bay rivers, especially those which have active recovery efforts.

The endangered Atlantic salmon, protected by the coalition, are part of an innovative recovery model. The Fundy Salmon Recovery program is the first project in the world to collect young fish from the wild and raise them in an ocean environment at a marine farm site. These salmon are then released into rivers in Fundy National Park as well as the traditional Mi’gmaq rivers of the Petitcodiac watershed through Fort Folly First Nation partners.

Fundy Salmon Recovery is a true collaboration of government, community, academia and industry stakeholders working together to protect young salmon and improve their chances of survival when released back to the wild as adults. Through collaboration and innovation, the goal is to increase the number of spawning salmon in the inner Bay of Fundy.

Meeting the other officers about a kilometre from the estuary, officers Audet and Levesque head downstream to check on angling activity. A road crosses at the mouth of the Upper Salmon River and it is a popular place for striped bass angling.

“Many of the fishermen are locals who know and follow the fishing regulations, however, in the summer and fall we see many tourists fishing off the bridge who are unaware there is an endangered salmon population returning to this river,” Levesque explains. “Our role is just as much to educate as it is to enforce.”

The Atlantic Salmon Law Enforcement Coalition has recently developed signage for critical salmon rivers both in and outside the park. As the value of salmon as a recreational fishery is high, collaboration among local law enforcement agencies is the best strategy for salmon protection. The Atlantic Salmon Law Enforcement Coalition includes the Parks Canada Wardens service, fishery officers from DFO’s Conservation and Protection branch, officers from the RCMP and Crime Stoppers, conservation officers and off-road vehicle officers from the New Brunswick Department of Justice and Public Safety, and wildlife enforcement officers from Environment Canada. Through education, monitoring and enforcement, this group is working to ensure the protection of this endangered salmon population during this important spawning adult life stage and as they cross jurisdictional boundaries from within and outside Fundy National Park.

To end their patrol, Audet and Levesque meet back at headquarters to check in with provincial conservation Sgt. Shawn Farrell by phone. Aside from regular duties, Farrell is also the Department of Public Safety provincial co-ordinator for Crime Stoppers in New Brunswick. Together, the three share information, set priorities and give updates on ongoing cases.

Since the coalition has been formed, the increased education and enforcement has resulted in decreased violations of the Species at Risk Act and the New Brunswick regulations of the Fisheries Act. Furthermore, the enforcement of wild endangered inner Bay of Fundy Atlantic salmon has also protected thousands of adult salmon, which has resulted in a density of wild-born juveniles unseen since the population collapsed.

The coalition has won the Parks Canada Chief Executive Officer Award of Excellence for its work in protection, collaboration and capacity building as well as the Crime Stoppers International Media Award for its Crime Stoppers ‘Crime of the Week’ commercial.

It is an example of success through partnership, passion for conservation and excellence in enforcement.