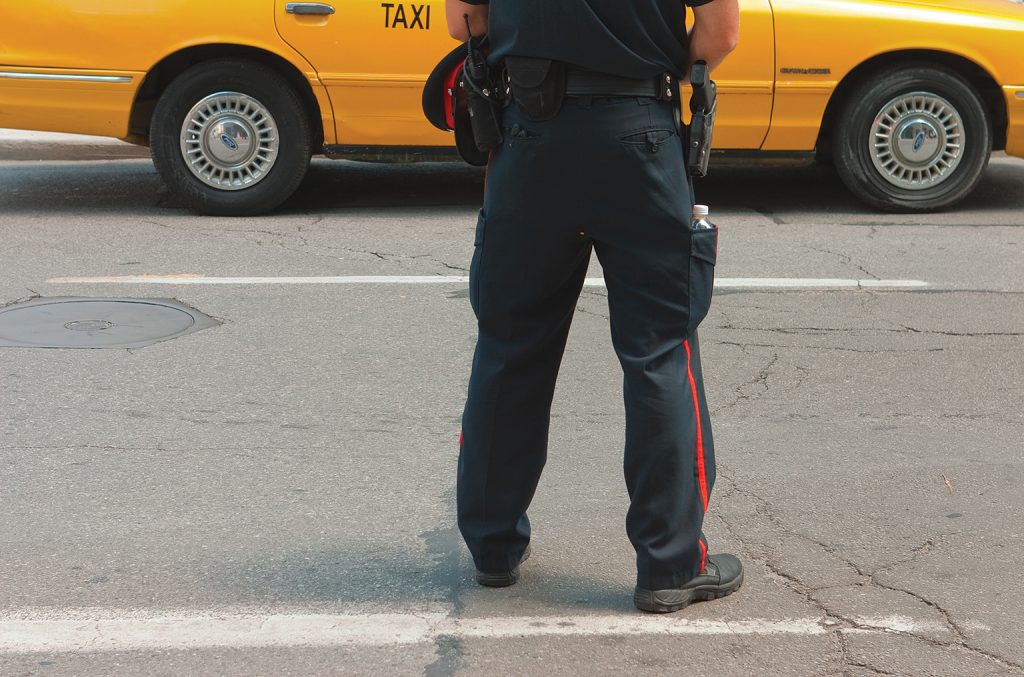 One Sunday in March, detectives from the 52 Division of the Toronto Police Service convened at a bus station and coordinated a plan. They had received intel that a taxi driver, who had been scamming patrons, would be parked at a local bus station, waiting for customers.

Det. John Maciek, who has been a lead investigator since the scams became commonplace in Toronto, said the team quickly located and began tailing the suspect. Pretending to be a customer, D/Const. Nicole Ozretic got in the his cab.

“She had a non-functioning debit card and told him to drive her to a predetermined location and paid with the debit card. He switched her card for a fake one and, of course, he was then arrested,” said Maciek. “We also found quite a few cards inside the car along with the point of sale terminal.”

This recent arrest is just one example of an ongoing investigation by Greater Toronto Area (GTA) police. The taxi scam, which seemingly originated in Montreal, migrated and began popping up in Toronto around 2015. Taxi drivers began using a payment machine to attain a customer’s PIN number and, once the number was captured using a rigged terminal, a fake debit card would be switched with the real one and given to the customer. The scammers, then armed with the real card and pin number, would deplete the victim’s bank account.

Maciek said the first offender that really caught their attention and tipped them off to the scam had been “prolific”. Around 2015, several victims came forward explaining how they were bilked out of tens of thousands of dollars by a taxi driver.

“The issue was he was always changing his appearance so whenever we’d get footage, he’d look different,” said Maciek. “We were lucky because we got a tip from a Peel officer, were eventually able to confirm all the information and obtain a search warrant.”

In September 2017, police arrested the Scarborough man, Adnan Jahangir, then 44, and charged him with more than 180 counts of theft, fraud, unauthorized use of credit card data and property obtained by crime. At the time of his arrest, police confirmed they had begun investigating Jahangir’s taxi debit-card scam in 2015.

In the years that followed, a trend emerged. A driver would be caught and charged, the operation would seemingly die down and then, slowly, it would start up again. Maciek said scammers targeted Toronto’s Entertainment District initially. Most victims were young (20 and 30-yearolds) and often intoxicated. This meant they were less likely to notice their card had been switched and often found it more difficult to remember and describe drivers.

Maciek also noted drivers often worked with a handler who would be given the stolen card as well as the downloaded data from the point of sale terminal so they could access the victim’s funds. Typically, the driver would be given a certain amount of money for every card he brought in.

Soon, it turned into a long-term, collaborative investigation among officers from 14, 51, 52 and 55 Divisions of the Toronto Police Service (TPS) as well as members of the Peel Regional Police and various financial companies. The operation was dubbed Project Switch.

“A few departments started comparing notes because we were running into the same issues,” said Maciek. “So this really became a team effort with officers from all the divisions using their investigative skills and training to net results. Officers gathered information and shared occurrences with each other. If we had something that was important, we called each other.”

He said they “got lucky” in several cases, identifying scammers through fingerprints.

“We were always cautious to approach the taxi company agents because we weren’t sure whether they were in on it, so we’d often only approach or ask them if we identified a car,” said Maciek. “Usually we’d ask the [victims] for the card they were given in place of their own or the receipt and we’d submit those for fingerprints.”

The joint-investigation yielded widespread success. The group of Fraud and Financial Crimes investigators, including Maciek, D/Consts. Jas Chahal and Mickael Ferreira of 14 Division, Phillip Gayle of 52 Division, Francis Young of 55 Division and Elliott Lee of 51 Division, were even recognized with Investigative Partnership of the Year awards (presented by International Association of Financial Crimes Investigators) in March.

Maciek said much of the officers from other divisions have since begun focusing on other projects, but the 52 Division, including Maciek and Gayle, with the help of Const. Ozretic and Const. David Byun, continued the work. He said that though the pandemic resulted in less people using car/ride services, it didn’t slow the scammers for long. They simply got creative. They began using a new approach: cab driver-passenger teams.

“They started approaching people in parking lots and the passenger would ask people to help, saying they only had cash and the driver refused it due to COVID-19. So, lots of people thought they were being a good Samaritan by using their card to pay the fare in exchange for cash, but the driver would switch the cards and they often wouldn’t notice until they tried using it later on.”

He said he doesn’t see the scam going away any time soon. At the time of publication, his team was still actively pursuing five scammers. The rise of ride apps resulted in the taxi industry suffering, likely resulting in desperation from taxi drivers, who then turned to fraud to compensate for their losses. But, as Maciek was quick to point out, this isn’t all taxi drivers.

“While Uber has taken over, people have continued taking taxis and I still encourage people to continue using taxi services. I feel for the guys who are just trying to make an honest living because these [fraudsters] are stealing that from them,” he said. “That said, we’ve been really trying to get the word out to the public and will continue telling people to be cautious and to not hand over their card.”