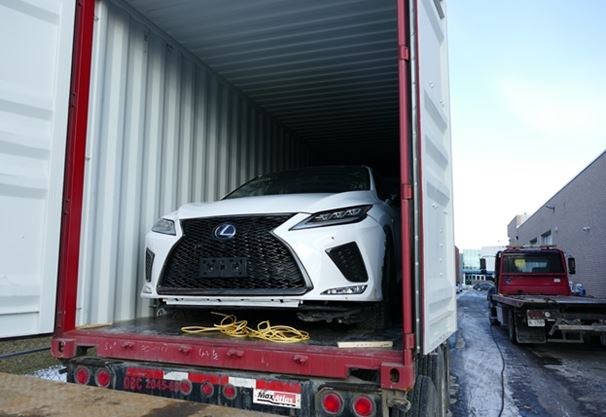 May 4, 2021 – More than 70 stolen vehicles, valued at $4.5 million, were recovered in an investigation dubbed Project Majestic.

The investigation focused on thefts of Lexus, Toyota and Honda sport utility vehicles that had been stolen from driveways throughout the Greater Toronto Area and exported overseas to Africa and the Middle East, specifically Nigeria, Ghana and the United Arab Emirates. Members of the York Regional Police Auto Cargo Theft Unit, in collaboration with Toronto Police Auto Theft Suppression Unit, the Peel Regional Police Commercial Auto Crime Unit and Peel Regional Police Criminal Investigations Bureaus, collaborated on the project and charged 18 people with more than 170 offences.

“Project Majestic was initiated in December 2020 after a high number of vehicle thefts in the GTA. They would scout cars in the evening, then return in the early morning hours, force entry and then reprogram the car’s computer to recognize a brand-new key fob to complete the theft,” said Detective Scott Cresswell, YRP Auto Cargo Theft Unit. “Essentially the group operated on a number of levels with a group of thieves who would bring cars to our traffickers.”

After being taken, the vehicles were driven directly to the Port of Montreal or loaded into a sea container in Toronto and transported to Montreal by rail. The containers were then loaded onto ships and delivered to buyers in Africa or the United Arab Emirates.

On March 16, following a two-month investigation, investigators executed eight search warrants across the GTA and Brossard, Que. This resulted in a total of 73 stolen vehicles, valued at more than $4.5 million, being seized by police. Charges laid included Conspiracy, Trafficking of Property Obtained by Crime and Theft of a Motor Vehicle.

Cresswell said there were also several vehicles that had already been containerized and shipped but that police targeted them for inspection when they reach their port.

“We feel we have made a significant dent in the criminal organization,” he said.

In a March press release, investigators of the operation extended appreciation for the assistance of the Durham Regional Police Service, the Canadian Border Services Agency and the Insurance Bureau of Canada for their help in the investigation.