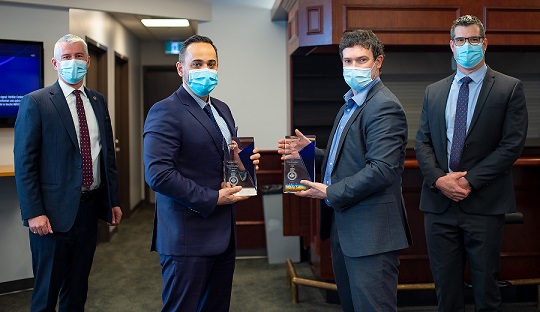 May 6, 2021 – The Canadian Association of Chiefs of Police (CACP) announced the 2021 CACP Award of Excellence for Combatting Organized Crime on March 10. This year, it was awarded for the joint efforts of the Integrated Proceeds of Crime (IPOC) Unit of Division C of the RCMP and the Criminal Investigations Division of the Canada Revenue Agency’s Quebec region for the successful implementation of Project Collecteur.

Project Collecteur was an investigation led by the Quebec RCMP IPOC Unit and the Canada Revenue Agency (CRA) from 2016 to 2019 as a result of information received from the Drug Enforcement Administration in the United States.

Members of the network facilitated the collection of money from criminal groups in Montreal and then laundered the proceeds of their illicit trade. The network offered a money transfer service to narcotic drug exporting countries and disposed of the accumulated money in Montreal through various individuals and foreign exchange offices in Toronto. The network used an informal value transfer system (IVTS) with connections in Lebanon, the United Arab Emirates, Iran, the United States and China. The funds were then returned to drug-exporting countries such as Colombia and Mexico.

On Feb. 11, 2019, the investigators arrested 17 individuals associated with the vast network, which was closely linked to several criminal organizations. The investigation, which fully meets one of the strategic priorities of the RCMP and the Canadian Integrated Response to Organized Crime, resulted in the seizure of significant quantities of drugs valued at $2.2 million and the seizure/restraint of assets valued at nearly $30 million.

The CACP said the impact of dismantling this international criminal organization resulted in strong partnerships with the United States, Lebanon and the five major Canadian banks, who “worked together to develop strategies to counter illicit practices and to study best practices to jointly improve the fight against this scourge which threatens the security and quality of life of Canadians and undermines the integrity and stability of our economy.”

“Organized crime groups have tentacles in all regions of the country and their activities negatively impact the economy, health and public safety,” said Supt. Chris Renwick, co-chair of the CACP’s Organized Crime Committee. “Project Collecteur demonstrates that sustained collaborative efforts focused on disrupting criminal networks. Its positive impacts were not only felt in Canada but resulted in ripple effects felt around the world.”

The investigation also had political impacts, being cited in the 2019 Federal Budget (page 240). It influenced the proposal to make legislative amendments to the Criminal Code in regards to trafficking property obtained by crime in order to provide law enforcement with tools that will aid in the fight against money laundering.