Graduating from the Police Studies program at Assiniboine Community College (Brandon, Man.) in 2009 has led to a varied and satisfying career for Brandon Police Service Const. Alice Potter. 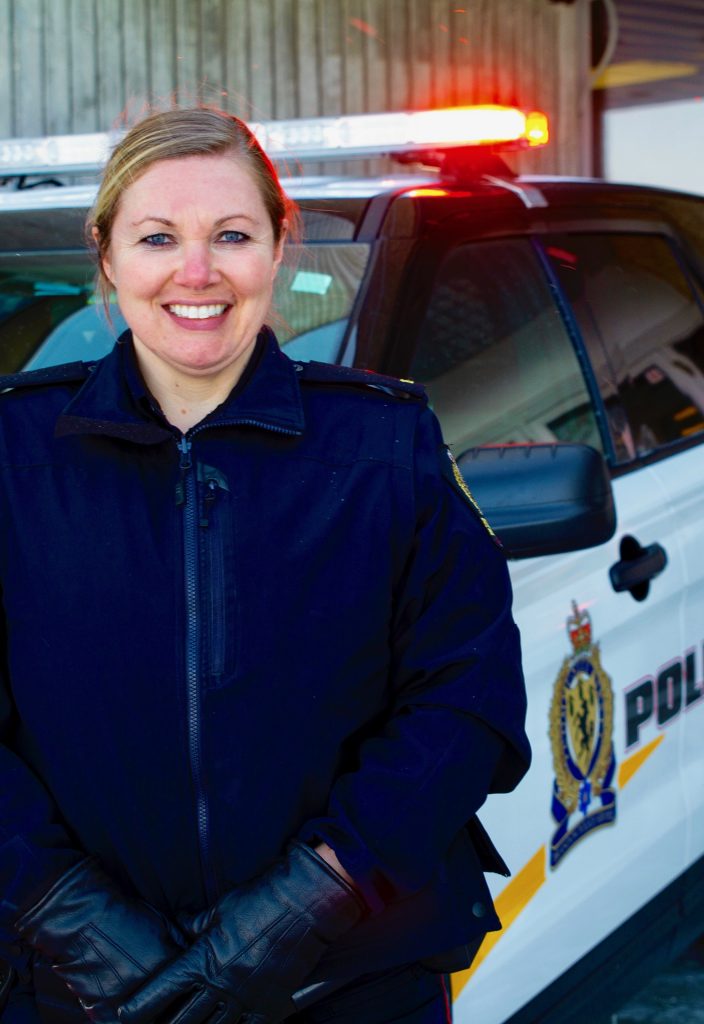 Brandon Police Service Const. Alice Potter has had a varied and satisfying career since graduating from Police Studies at Assiniboine Community College. She teaches drill to current Police Studies students.

Potter has moved around within the Brandon Police Service, believing every experience adds to her knowledge and helps her achieve her long-term career goals.

“I started specializing in traffic. I obtained my Traffic Collision Analyst level three and forensic mapping. Up until two weeks ago, I was the only current member reconstructing all fatal and serious collisions within the city,” she said.

Furthering her training, Potter became an instructor in many traffic areas including Radar, Laser, Alco-Sensor FST users and calibrators.

“Traffic is a passion for me,” Potter said with a smile.

Potter also became a drug-recognition expert, to identify drivers who are impaired because of drugs.

“With the new legislation, impaired driving by drugs is becoming a scary reality,” she noted.

Potter obtained her training in Phoenix, Ariz., which she indicated was a “phenomenal experience,” even though the course was very demanding.

In December, Potter made another move, leaving the training unit where she looked after the Brandon Police Service’s training needs for all sworn and non-sworn members and became the school resource officer for the 18 schools in the Brandon School Division (Kindergarten to Grade 8).

Potter is looking forward to her involvement with young people.

“You are able to connect with the students through presentations — stuff like bike safety, cyberbullying, internet safety or drug presentations that are age-specific. You read stories during ‘I love to Read’ week. Teach them how to do patrol and basic personal safety. I’m looking forward to it. It’s going to be very rewarding,” she said.

“I think it’s important in your police career to try different units, try different sections. Once you become comfortable, move on. Try something new. And build your knowledge base.”

Seven of her classmates are now her colleagues at the Brandon Police Service.

Potter estimates that more than half of Manitoba First Nations Police Service officers may be graduates of the college’s Police Studies program.

Any police agency can hire a Police Studies graduate and put them through the six weeks of Phase B training to become a sworn member. Some graduates have gone on to work in organizations such as the Winnipeg Police Service and the Royal Canadian Mounted Police.

Potter runs into many other program grads working in other aspects of law enforcement.

“Every time I step into the court office, many of the sheriffs I see have gone through the Police Studies program,” she said. “There are tons of corrections officers and security officers. The security officers that look after Assiniboine Community College are Police Studies graduates. Parole officers. Anything you can think of that has to do with law enforcement. Just because they don’t go into a police agency, doesn’t mean they aren’t a success story for the program.”

Many of the graduates want to be police officers, she notes. “However, they may require just a little bit more life experience and be deferred from an agency for a year or two.”

Potter suggests entering into a military program, such as regular or reserve forces, as policing is paramilitary.

“Build some life experience and apply often and to as many agencies as you can. It may take a few years, but if the passion is there, you will get hired by a service at some point.”

Potter credits the Police Studies program with giving her the skills she needed to succeed in her career, especially the scenario-based training.

“During scenario training, students take turns in their roles for a given scenario. Sometimes you may be the offender, a victim, or other times the officer. Having the ability to see and act out these positions helps you understand all aspects of policing, from every perspective.

Everything you sat and listened to in class, now as a police officer, you have to be able to do that, standing up, thinking quickly on your feet,” she added.

“Say you have a simple scenario, perhaps a theft that you studied on paper out of the Criminal Code. Now you are standing there, facing them. Thinking on your feet you process: ‘What are my grounds to arrest them? What are the elements of the offence and what paperwork do I have to do?’

It just puts everything into perspective on how it’s going to be in the real world in scenario-based training.”

Since Potter’s time, Police Studies has added a use-of-force simulation lab to make the scenarios even more realistic.

“I met so many amazing youths from the Brandon and Westman area. I am sure I will see many of them in uniform someday,” Potter said.

While the program took a break after three successful years, Potter plans to restart it in the fall of 2019.

On the first day of drill class for Police Studies students in 2008, the instructor asked Potter to teach her classmates how to march.

“I was the drill instructor for my own class, which is kind of a bizarre thing, but worked out really well,” she said.

Potter has come back as the Police Studies drill instructor for each new batch of students since then, and she designs a special memorized precision drill sequence for their graduation.

Potter is half-way through the online coursework she needs to receive a Bachelor of Arts in Policing from Wilfrid Laurier University in Ontario.

“I am a huge advocate for education and continuing your education. Keep learning,” she said. “At some point, if you want to instruct academically in the police world, having a degree is probably something that’s going to be needed.”

She suggests anyone who has compassion, is community-oriented and is looking for an ever-changing career where no two days look the same, to try policing as a career.

“Give Police Studies a try. It’s not for everyone, but everyone who graduates will forever hold that sense of pride marching in that final parade with their squad.”

Donald Benham is a communications specialist at Assiniboine Community College in Brandon, Man.
Print this page

Related
Use of Force Simulation Lab for police training opens in Brandon, Man.
Ontario Police College: Then and now
The professionalization of police training in Canada
Q&A with Colin MacLeod, retired RCMP pilot