A Nishnawbe Aski Police Service officer is on a mission to make his community, North Spirit Lake First Nations, a safer place by engaging and connecting Elders with radios — a valuable tool for crisis communications and socializing in an area where cell service is spotty.

Uchenna “Miles” Orakwelu, who immigrated to Canada from Nigeria eight years ago, befriended his community policing instructor, Douglas Pflug, a retired sergeant of the Guelph Police Service, when he was attending basic recruit training at the Ontario Police College (OPC) in Aylmer, Ont.

“The concepts of community policing that I learned have provided me with the tools that I can now use to reach out and build a better relationship between the police and the First Nations communities I serve,” Orakwelu said.

In his community policing class, Pflug said he challenges each police recruit to “go back to your respective communities, make at least one stranger smile per shift and over a 30-year career that’s well over 6,000 opportunities for positive engagement with your community.”

Orakwelu and Pflug have continued their friendship and mentorship and last month Orakwelu asked his former instructor for help in further applying the Ontario Association of Chiefs of Police Mobilization & Engagement Model of Community Policing in his community. 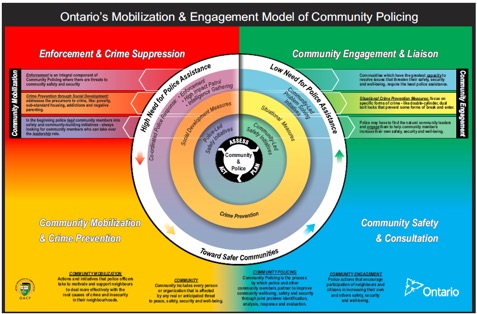 Orakwelu serves in the North Spirit Lake First Nations community where cellular service is not always reliable. The territory does however have an FM radio station. This inspired him to procure several heavy-duty radios to distribute among the community Elders. These radios could serve as a valuable tool both for crisis communication and community socializing, he said.

A GoFundMe page was set up with a goal of raising $2,000 to purchase 20 Milwaukee heavy-duty construction radios.

“Mr. Pflug, I hope your friends smile on an officer trying to make a difference in Canada’s First Nations communities,” Orakwelu said as they were launching the fundraiser. 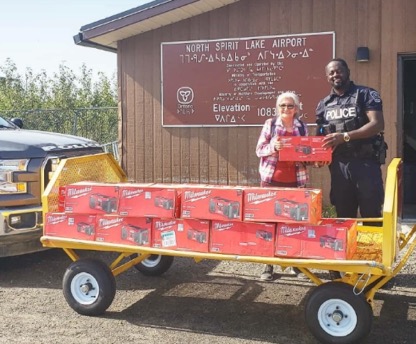 The Home Depot stores in both Guelph and Waterloo, Ont., Milwaukee Tools Canada and the University of Guelph Gryphons Football Advancement Team made generous contributions, increasing the total number of radios purchased to 29.

There were 56 separate donors through the GoFundMe initiative as well who all contributed to the success of this fundraiser, Pflug noted.

“Miles is a large man with an even larger smile. I am so proud of his efforts to make ‘strangers smile’ in the community he polices,” Pflug continued. “I am very confident Miles unleashes amazing human potential many times each day. He should be very proud of himself and what he represents as a police officer.”

Pflug has been teaching community policing since September 2017 at OPC. There are thousands of young officers like Orakwelu in Ontario’s communities, he said, and it’s “extremely encouraging to see them take similar steps to make Ontario greater, one smile at a time.” 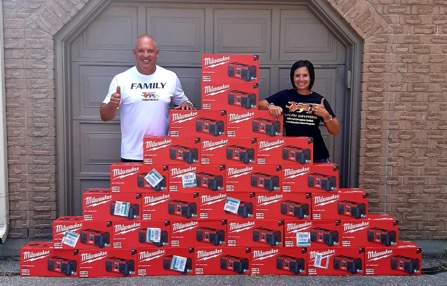 Doug and his wife Michelle show off the 29 radios. The Pflugs are both instructors at the Ontario Police College and also donate their time to the University of Guelph Gryphon Football Program as mentors and community liaisons.
Photo: Douglas Pflug

* Const. Orakwelu was one of the honourable mentions for our 2020 Rookie of the Year Award. Check that out here.