I grew up in a large Irish family in the east end of Hamilton, Ont., where our ex-Navy father got tired of breaking up the wrestling matches, daily fights and the assorted shenanigans we would get ourselves into. From a young age, he encouraged us to resolve our differences by lampooning each other rather than destroying parts of the house; the funniest cartoons made the fridge. 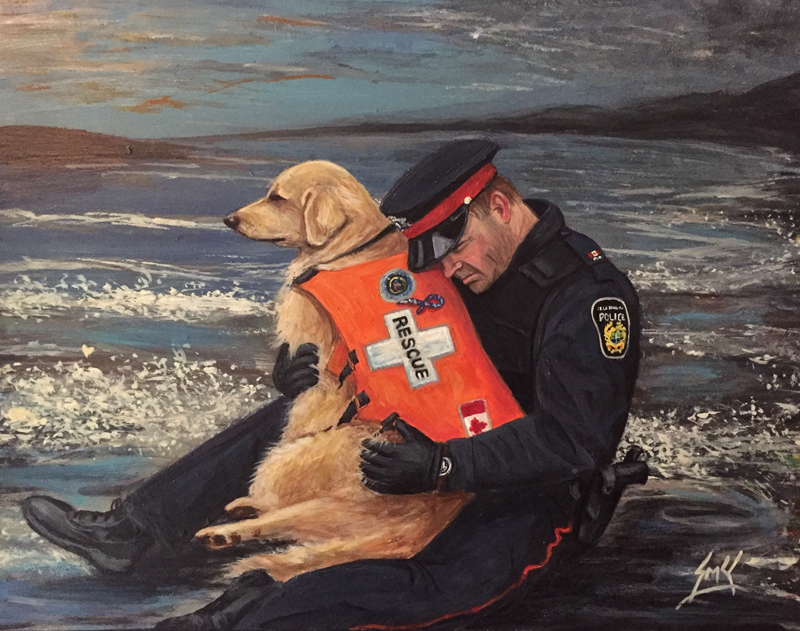 There was no better reward than hearing Dad’s laughter, particularly after he would have a stressful day at work, and it was then I first began to realize a simple drawing could evoke positive emotional health effects.

This tradition of drawing/cartooning continued even when I became a police officer. The profession, of course, came with its fair share of stress and then there were the typical trials and tribulations of our personal lives… Hence there was always the need for a cartoon or two to help release the pent-up emotions.

As the years passed, life’s pressures and the occasional grisly nature of the job’s various assignments began to affect my moods. One day my wife, who has always been there to encourage me, remarked: “Go paint something… You’re always in a better mood when you paint.”

I challenged myself to create something that would elicit more than just laughter — something that would perhaps actually mean something to someone. That was an important revelation for me — how art could not only affect the mood of the viewer, but also have positive impacts on the artist. What a powerful tool this could be in a stress-filled, fast-paced work environment where, pending one’s assignment, adrenaline levels can spike going from call to call, enormous pressure could exist to solve a case that threatens public safety, or one finds themselves dealing forensically with the visceral aftermath of a tragic accident or heinous crime. At least for some of us, art was the key.

I soon realized there were other like-minded artists in the organization and in 2006, the Police Artists of Peel was formed.

The Police Artists of Peel is comprised of a dozen civilian, sworn, currently serving and retired members of the Peel Regional Police. They are a collection of painters, sketchers, photographers and stained-glass artisans who work throughout the year, creating and donating original works in support of a multitude of charitable endeavours, such as Special Olympics Ontario and Boots on the Ground.

In policing, we are often exposed to the harsher realities of life and the suffering of victims we are sworn to protect, whether the exposure was obtained vicariously or in our role as first responders. Each artist has his or her own story to tell through the lens of a camera or by pouring it onto a canvas, but a central theme runs through all of us and that is: to rid ourselves of the traumatic stress associated with the work we do/did.

The Police Artists of Peel group and the art itself has provided us with a creative vehicle to transform the burden of carrying this stress to an honorable and charitable end. In fact, the Police Artists of Peel were recognized with the Peel Regional Police T.E.A.M. (Together Endeavours Achieve Milestones) Award in 2017 for exemplary team collaboration, service excellence and team dynamics.

Creating art is not for everyone, however, most folk, even those with tired eyes, will always make time to look at a picture or a painting, or laugh at an insightful cartoon. There are many talents hidden among the rank and file of all police organizations and it simply takes a bit of motivation to connect with others of similar talent who want to improve the quality of life in the workplace.

Pick a charity, add live music, throw in some food and voilà — you have your first art show. This simple formula has worked for the Police Artists of Peel for 11 years strong and we encourage anyone with similar interests to contact us to ask for advice on how to get started — find us on Facebook.

Shawn McCowell is the chair of Police Artists of Peel. He proudly served the Peel Regional Police for 30 years in a variety of assignments, including Uniform Patrol, Use of Force, Criminal Investigation, Professional Standards, Early Intervention, Peer Support and Organizational Wellness. He recently retired as a staff sergeant.
Email him at mccowellshawn@gmail.com.
Print this page