Features Case Law
Peace bond is an instrument of preventative, not penal, justice: Hearsay is admissible

The Yukon Court of Appeal has decided that the usual rule of evidence applicable in a criminal trial that hearsay evidence is presumptively inadmissible does not apply to peace bond proceedings. In R. v. Schafer, 2020 YKCA 3, the defendant, who had a long and serious criminal record, was released from custody in B.C. after serving a sentence for break and enter and sexual assault with a weapon. On his return to Whitehorse, he was arrested at the airport and brought before a Yukon Territorial Court judge for a s. 810.2 Criminal Code peace bond hearing.

Section 810.2 allows a judge to order a peace bond (recognizance) requiring a defendant to keep the peace and comply with other conditions imposed where, on the evidence adduced, the informant has reasonable grounds to fear that the defendant will commit a serious personal injury offence. Serious personal injury offences include sexual assault, sexual assault with a weapon/cause bodily harm, aggravated sexual assault, or an indictable offence punishable by 10 years imprisonment or more that involves the use or attempted use of violence against a person, or conduct that endangers the life or safety of another person.

A police officer, acting as the informant in this case, adduced hearsay evidence based on risk assessment reports and psychological assessments conducted by Corrections Canada personnel. Relying on these documents, the officer testified that he feared, on reasonable grounds, Schafer would commit a serious personal injury offence as defined in the Criminal Code. These reports and source documents, however, were not provided to the judge. Nevertheless, the judge imposed a s. 810.2 recognizance for two years on Schafer with conditions, including abstinence from alcohol, drugs or other intoxicating substances.

Schafer appealed this order to the Yukon Supreme Court arguing, in part, that the Territorial Court judge erred by admitting hearsay evidence at the proceeding. The appeal judge rejected this argument. She concluded that hearsay evidence was admissible and the usual rules of evidence applicable in criminal trials do not apply to peace bond hearings.

Schafer appealed once more, this time to the Yukon’s top court. He again submitted that hearsay evidence was presumptively inadmissible on a peace bond application under s. 810.2 unless such hearsay was admissible under a recognized exception to the rule or the principled approach to hearsay. In Schafer’s view, the only evidence that is admissible in a peace bond hearing is evidence that would be admissible at a criminal trial and there was nothing in s. 810.2 that displaces the application of the usual rules of evidence. 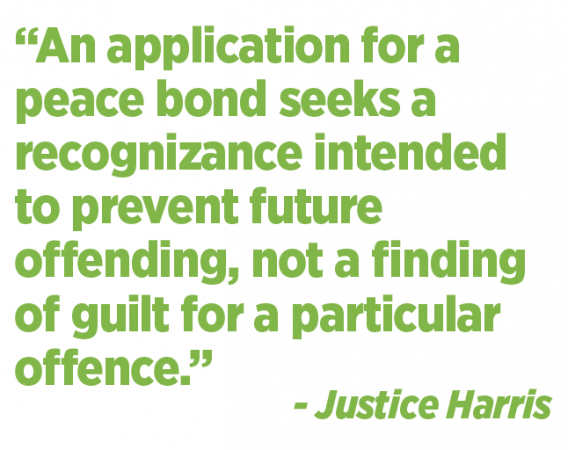 “A peace bond is an instrument of preventive justice,” said Justice Harris, speaking for a unanimous three-member panel of the Yukon Court of Appeal. “An application for a peace bond seeks a recognizance intended to prevent future offending, not a finding of guilt for a particular offence.” Because of this, “the nature of a peace bond hearing, as legislated in the Code, requires a flexible approach to the rules of evidence that allows a judge to rely on credible and trustworthy hearsay to determine if he or she is satisfied that the informant’s fear is reasonable.”
In ruling that hearsay evidence is admissible at a peace bond hearing — much like other circumstances involving a reasonable grounds standard such as search warrants, wiretap authorizations and applications for firearms prohibitions — Harris noted the following:

As a consequence, the Court of Appeal found that the standard of proof on a peace bond hearing is whether the judge is satisfied by the evidence adduced, on a balance of probabilities, that the informant has reasonable grounds to fear a defendant will commit a serious personal injury offence. Hearsay evidence is presumptively admissible at the hearing for this purpose. The judge will then determine the weight to be given to the hearsay evidence in assessing the objective reasonableness of the informant’s subjective fear.