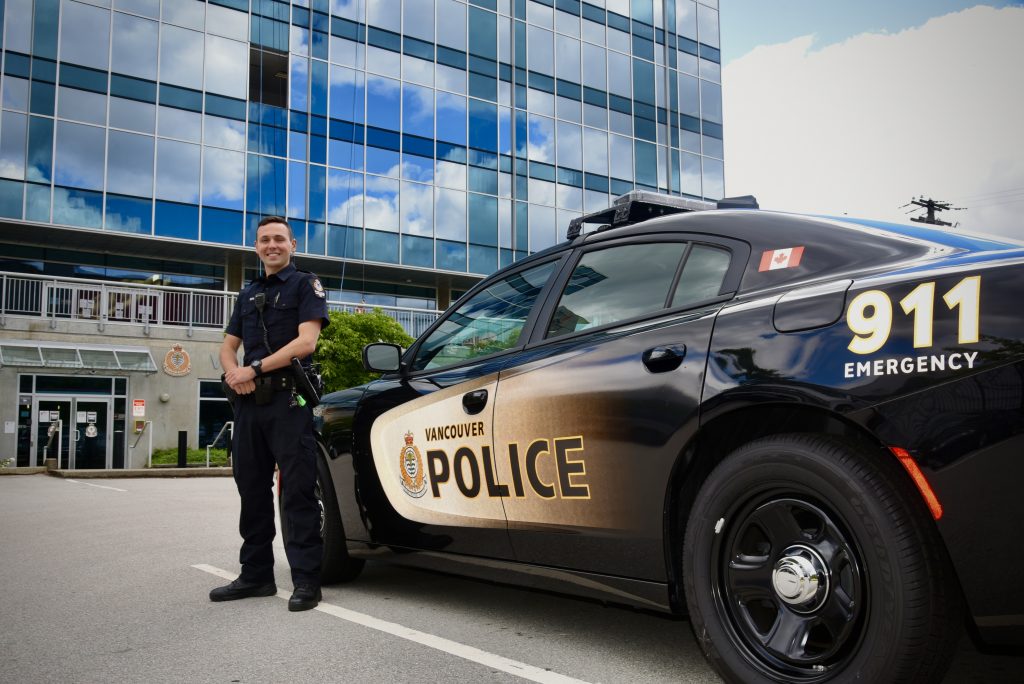 Vancouver Police Department (VPD) Constable Chris Birkett has only been an officer for roughly three years, but has already broken down barriers, proven his dedication and commitment, and exceeded all expectations.

Birkett, who was officially hired by the VPD in January 2018, is Blue Line magazine’s 2021 Rookie of the Year. This annual accolade recognizes and encourages a standard of excellence that exemplifies “leadership as an activity, not a position” and pride in service to the public. Its goal is to highlight promising new officers who are effectively paving the way for the future of policing in Canada and are making positive waves among their peers, agencies, communities and beyond. Birkett’s colleagues agree he more than fits the bill.

“Of over 1,300 sworn officers in the VPD, Const. Chris Birkett unquestionably stands out as a true leader among his junior peers,” wrote VPD Const. Tyson Radons in Birkett’s nomination letter. “At only 31 years of age, Chris has fully devoted his life and career to public service and community advancement. He has continuously shown an inspiring passion and willingness to better his immediate community, province and country.”

Birkett said his career aspirations began in high school after meeting his high school’s liaison officer, who soon became a mentor. He encouraged Birkett to take part in the VPD Student Challenge in his grade 12 year, which was a week-long police training. After that, he was sold. In 2009, Birkett attended Langara College where he studied criminal justice and became a loss prevention officer and, at 21, he was hired at the B.C. Sheriff Service.

“VPD was the end goal. It had been since I was in high school,” said Birkett.

In January 2018, he achieved that goal and was officially hired by the VPD. He graduated from the police academy in November of that year and was assigned to patrol in District 2, Team 7.

“I consider myself super fortunate because a lot of people don’t know what they want to do, especially in high school, so to get put on that path so early really gave me a leg up. I’m very grateful for that experience,” he said.

Modest in his accomplishments, Birkett credits much of his success thus far to having a supportive squad leader. Det.-Const. Peter Sadler, he said, encourages his team to pursue learning opportunities and projects of interest. When asked about a situation that showcased this, Birkett immediately launched into an explanation of a recent investigation dubbed Project Block Party.

In 2017, Birkett was made aware of a neighbourhood dispute in which the behaviour from one resident had been escalating over time and cars were being keyed in the middle of the night. While residents suspected the individual in question, there was no tangible evidence to tie him to the crimes.

“By the time I got to the file, there had been over 50 incidents tracked by the neighbourhood. The residents felt terrorized living on their block, not knowing if they were going to wake up to their car being damaged,” said Birkett. “It wasn’t a flashy file but it was meaningful because it was impacting the residents’ day-to-day lives.”

So in 2019, with Sadler’s blessing, Operation Block Party was born. Birkett wrote an operation plan, utilized VPD resources and investigative techniques, and spent several nights surveilling the neighbourhood. Then, in January 2020, after enough evidence was collected to arrest the accused, Birkett conducted a four-hour interview and was able to establish motive. The day after the arrest, Birkett returned to the neighbourhood to compile any additional evidence for the file but was greeted with tremendous gratitude instead.

“You can really see it made a huge impact on the community. It’s really easy to just go from call to call, but this case really showed me how valuable being proactive and seeing a project through to the end could be.”

In working with the Crown, the VPD ended up charging the accused with 20 counts of mischief. There have been no incidents since but, at the time of publication, the case had yet to go to trial.

In 2019, Birkett saw the need for more support for members of the LGBTQ2S+ law enforcement community, who may face additional mental health challenges, stigma and, in some cases, a lack of kinship within departments. Birkett did not let his limited time on the force dissuade him from seeking meaningful change. He, along with several other LGBTQ2S+ members, came together to begin exploring the idea of a peer support organization.

Out On Patrol Society was incorporated at the end of 2019 and officially launched on May 26, 2020. It is a non-profit peer support organization for LGBTQ2S+ members in all areas of law enforcement. Along with peer support, the society is also focused on community engagement, charitable work and education.

“I think one of the most important pieces to the organization is education and going in and talking to schools,” said Birkett. “We want to show kids who are maybe apprehensive about coming out or are afraid to apply that there are gay cops and policing is a career option for them.”

Because the organization launched during the COVID-19 pandemic, Birkett has not yet had the opportunity to visit schools but said this will be happening in the near future. For him, it’s all about making a positive difference—it’s the reason he went into policing and why he’s been so proactive as a rookie. He also noted wanting to help bridge some of the dissonance that has been created between law enforcement and the public.

“Typically, when people deal with us, it’s not the best time in their life, so we really wanted to provide the community with an opportunity to interact with us in a positive and engaging atmosphere where we can host community events and they don’t have to feel apprehensive with us,” he said. “We really want to open up to have some meaningful dialogue because, although we recognize that there’s a lot of progress has been made between law enforcement and the LGBTQ2S+ community, we know that there’s a lot of work to be done and we want to play an active role in that work.”

Out On Patrol currently represents 220 active members from agencies across Canada that otherwise might never had been given the space to be recognized as both an officer and as a member of the queer community. As organizer, it’s no surprise Birkett took the most active leadership role in the foundation: president.

“You can ask anyone who knows him, Chris will drop everything to help, volunteer for the difficult jobs and never complain,” said Tyson. “Chris is known as a true leader among his peers. What makes his career so remarkable at this point, however, is how he sees ways in which his community can be improved and does more than just talk about problems. Chris fixes them.”

Leading with a purpose

Birkett is very community-focused in all aspects of his life. Outside of law enforcement, he founded a recreational flag football team that raised money for charity. He was a “big brother” for nine years and is still actively connected to his “little brother”. He was also awarded the 2017 Commemorative Canada 150 Medal by the Senate of Canada for his substantial civilian volunteerism.

When asked about his future goals, Birkett said he’d like to continue pursuing investigative work, but is open to any and all possibilities. Regardless of where his career takes him, he said his goal remains the same: to make a positive difference. If you ask his colleagues, they’d tell you he already has.

“In the opinion of all those who know Chris, he exemplifies leadership as an activity and not as a position,” said Radons. “I am incredibly proud and privileged to call Chris a colleague and cannot wait to see what the future holds for him.” 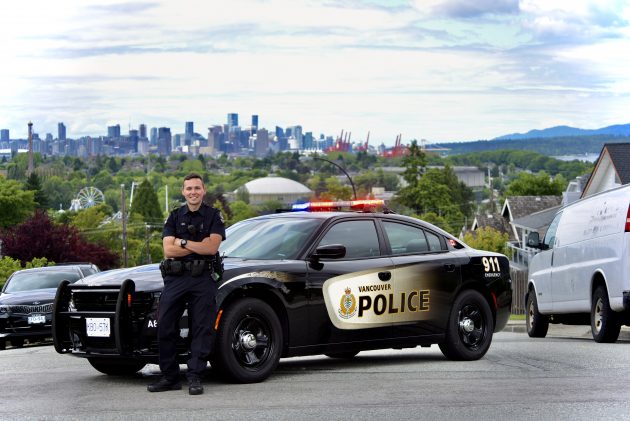 THANK YOU TO THE 2020 PANEL OF JUDGES

Thank you to our 2021 judging panel for your expertise, thoughtful insight and steadfast dedication. Your expertise are greatly appreciated.

Christine Silverberg is an accomplished lawyer and the Chief of the Calgary Police Service from 1995-2000. Christine went to law school after she retired as Chief, becoming a Partner at Gowlings LLP, then joining the independent law practices at Wolch deWit Silverberg & Watts. In 2015, Christine launched her own firm, SilverbergLegal. Christine is currently a CACP and OACP member. Among her many awards, she was also selected as part of the YWCA sesquicentennial project as one of 150 women who had had a significant impact on Calgary over the last 150+ years and in recognition of positive and extensive impact on community (2017).

Peter German is a former deputy commissioner with both the Royal Canadian Mounted Police and Correctional Service Canada. He currently practices law, is a consultant on criminal justice and leadership matters, and is president of the International Centre for Criminal Law Reform at the University of British Columbia. Prior to retiring from the RCMP, he was the Deputy Commissioner for Western and Northern Canada. He holds a doctorate in law from the University of London, and is the author of a legal text, Proceeds of Crime and Money Laundering. German was awarded both the Queen’s Gold and Diamond Jubilee medals, is an Officer of the Order of Merit of Police, and was awarded his Queen’s Counsel designation in 2017.

Armand La Barge is the retired chief of police of York Regional Police in Ontario. La Barge began his career there in 1973 and retired in December 2010 after serving as chief for his final eight years. La Barge is the past president of the Ontario Association of Chiefs of Police and the Ontario director of the Canadian Association of Chiefs of Police. He is a graduate of the FBI National Academy and the past chair of Special Olympics Ontario. He is also the immediate past chair of St. John Ambulance Ontario and a member of the board of governors of Trent University and Sacred Heart Catholic College. La Barge was awarded the PESM with one bar, both the Queen’s Gold and Diamond Jubilee Medals, is an Officer of the Order of Merit of the Police Forces and a Commander in the Order of St. John.

Related
Out On Patrol: Q&A with Chris Birkett
The importance of leadership
Restating the commitment to improving policing in Ottawa
Exploring organizational values, culture and mindset change in policing