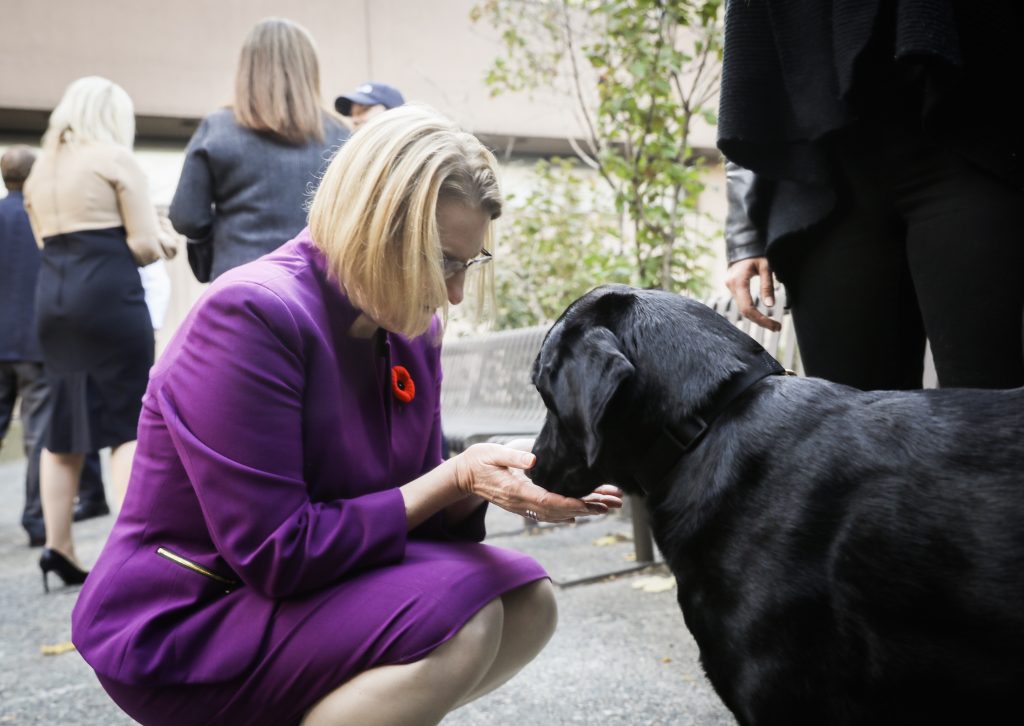 "We made a commitment to take action and develop a modern animal welfare enforcement system to keep animals safe," said Solicitor General Sylvia Jones. Photo: Ministry of the Solicitor General

TORONTO — A specialized team of provincial inspectors would enforce animal cruelty laws in Ontario under new legislation introduced on Tuesday.

Solicitor General Sylvia Jones said the team would be composed of about 100 inspectors, but she wouldn’t say how much the new system would cost.

“I believe at the end of the day, we’re going to have a stronger model that ensures we have consistency in enforcement across Ontario,” Jones told reporters.

Under the bill, there would also be specialists who will deal with livestock, horses and zoos and aquariums. Jones said Crown attorneys would be trained to deal with animal cruelty prosecutions. The new law would go effect on Jan. 1, 2020.

In March, the Ontario Society for the Prevention of Cruelty to Animals told the province it would no longer enforce animal cruelty laws, focusing instead on other endeavours such as its shelter operations.

The move followed a court decision in January that declared the charity’s enforcement powers unconstitutional. Justice Timothy Minnema said the province erred when it gave police powers to the charity — which has enforced the laws on behalf of the province since 1919 — without imposing reasonable standards of transparency and accountability.

Animal advocates and stakeholders have long spoken about the need for a revamped cruelty enforcement regime in Ontario. Many said Tuesday they were cautiously optimistic about the bill.

“We support a robust, well-funded public enforcement model because animal protection is a key societal value, and this is what Ontarians expect.”

“Of particular interest to me is the potential contribution Crown attorneys can make to enforce animal abuse laws,” she said. “To date, animals have not been well represented in our courts and abusers get away with a slap on the hand. Hopefully that will end now.”

“Crown prosecutor training is a breakthrough for Ontario in animal welfare,” she said. “It will strengthen relationships between enforcement and Crown leading to more convictions for animal abusers.”

Kendra Coulter, a labour studies professor at Brock University, studied the previous OSPCA enforcement regime and spoke to dozens of frontline officers as part of her research. She found in a 2016 report that the majority of officers were poorly paid, worked in the field alone often facing dangerous circumstances, and were responsible for “extremely large geographic regions.”

“The framework is promising and thoughtful,” she said on Tuesday. “Our research has found that a dedicated publicly funded anti-cruelty team would be the smartest option for Ontario so I am pleased that the government has made this the foundation of its new approach.”

The solicitor general also said there will be big fines for corporations found guilty of animal cruelty, including a $250,000 fine for a first-time offence and up to $1 million for repeat offenders.

This story by the Canadian Press was first published Oct. 29, 2019.