Police officers in Ontario first start their careers by attending Ontario Police College (OPC) in Aylmer, a post-hire training facility that first opened in 1963 and is regarded as a leader in policing education. In fact, OPC is one of the largest police training facilities in North America, with over 8,000 recruits, police officers and civilian personnel attending the college each year. 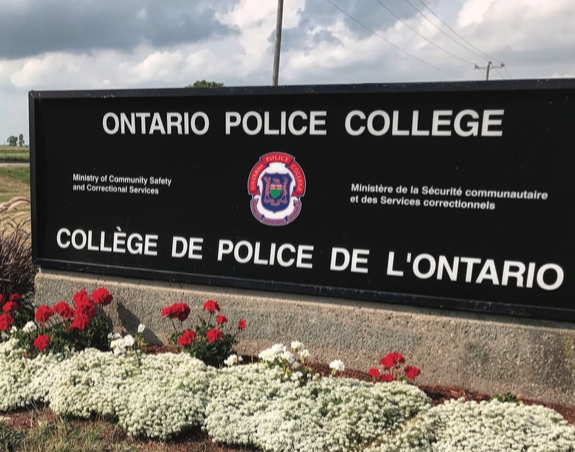 Once the updated facility opened in 1975

OPC came about after a group from the Chief Constables’ Association (which later became the Ontario Association of Chiefs of Police) developed a plan in the early 1950s to establish a centralized police training college in the province. Aylmer’s decommissioned Royal Canadian Air Force (RCAF) station was selected as the site.

The military influence remained strong at OPC in those early formative years. Rules and regulations were very similar to what existed at the former RCAF station, since a lot of the initial OPC instructors were ex-military and like-minded police officers.

The recruit sleeping quarters were the old wooden military H-Huts, so named because of their design. Each of the two long, narrow buildings crammed in about 40 recruits, and then the two huts were joined by a common entryway and shared washroom through the middle.

“The rows of single beds were all lined up, maybe five feet apart, just like you would see for military boot camp on the old TV shows,” says Claude Brett, who graduated from OPC in 1974 and retired in 2009 as chief of the former Perth Police Service. “You had a small, upright locker to put your stuff in and that’s about it. And, there were no luxuries like air conditioning.”

Women had their own separate H-Hut — the first female recruits came through OPC in 1969. Regardless, privacy was still hard to come by, even though their numbers were low and they had more space to themselves.

Training days started at 6 a.m. with a morning PT class or run, followed by packed days of mainly classroom instruction. There was some range time and classes on defensive tactics, but things like scenario-based training or driver training weren’t introduced at OPC until several years later.

With the military influence strong, inspections — both of the recruits and of their living space — were the norm. It wouldn’t be uncommon for recruits returning from class to find their beds tossed or kits thrown about if things weren’t completed to the instructors’ standards.

Jim Berney, protocol officer at OPC, says those exacting standards even carried over to the cafeteria.

“A strict dress code was in place to even gain access to the former military mess hall,” Berney says, adding that separate buildings existed for recruits and staff until the new OPC facility opened in 1975.

Berney says in speaking with former instructors from those early years, the feedback was that the food was good — coming off the steam line with at least two hot choices available at every meal. He describes the atmosphere as being very similar to any large institutional kitchen: simple, hot and of a decent quality.

A sign of the times, smoking in the buildings was allowed but alcohol was strictly forbidden. If a recruit wanted a drink, they had to go offsite — in theory anyways. Brett says in his group, at least, booze was easy to come by.

“The ceilings in the H-Huts were absolutely laden with booze,” Brett says with a chuckle. “It was a heavy tile drop-ceiling of sorts, not like you would have nowadays in your basement, but a wooden drop-ceiling that was almost collapsing from the weight of the bottles.”
Curfew and lights out was at 11 p.m. Night duty officers did regular checks to ensure compliance and infractions of any sort were dealt with swiftly.

“If you did something wrong, you generally had to stand at attention outside at a certain time of the night for a week straight,” Brett explains. “That was one form of detention. And it generally wasn’t punishment for one; it was punishment for all.”
After the duty officer finished his rounds, internal discipline amongst the recruits themselves was always dealt with at night, too, according to Brett.

He says a recruit who needed to be taught a lesson might find himself sleeping out in the middle of a field somewhere.

Once the updated facility opened in 1975

Once the updated facility opened in 1975, it marked the start of a new direction for OPC that would usher in major changes, including where the recruits slept. It incorporated three new residences with 520 single rooms, styled much like college and university dorms, consisting of a bed, bedside table, desk and closet. The new rooms were a step up from the former H-Hut configuration, and brought with it something recruits craved in those early years: privacy.

As the 1980s came around, the slow shift away from the heavy military influence continued. Most of the old RCAF instructors had retired, specific fitness instructors were hired and wellness classes were added as part of the physical fitness component. Even the permanently staffed, on-site duty officer was replaced with a student.

By the late 1980s, more practical components such as driver training and scenarios were being introduced.

Average class sizes varied from 20 to 40 students and, although there were more female recruits, they still made up well under 10 per cent of the total student population.

Cost recovery was introduced in the 1990s with recruits  being charged tuition. Use of force standards were introduced along with training in the use of other tools, such as OC spray. Practical scenarios were further developed and reflected the newer realities of policing. Shooting standards were also refined significantly and driver training was enhanced to ensure officers could drive in police circumstances.

The wellness trend continued and special dietary requirements were made available to the students, including more variety and choice of offerings.

The use of after-hours student duty officers was also discontinued and the 11 p.m. curfew was lifted, replaced with a more relaxed form of “quiet time.” Inspections were also reduced to duty gear only — room and uniform inspection were discontinued.

The reprieve from inspections was short-lived and resumed by the 2000s. But the biggest change continued to be how recruits were taught. The Dynamic Simulation Area was constructed and practical scenarios now involved the use of professional actors in life-like settings such as a bank, restaurant, apartment, etc. A research unit was started at the college to help develop the curriculum. Evidence-based training was introduced and civilian instructors were brought in to cover the specialty areas best not conducted by police officers.

Berney says recruits are generally older nowadays and their education level has consistently gone up over the years as well, but nonetheless OPC has been at the forefront of policing education, making heavy use of advanced teaching methods and technology.

The friendships are one of the first things that come to mind for Smiths Falls police officer Tyler Brett when he thinks of OPC.

“Yes, the rooms were small and the beds were hard, but at that point in my life I could have cared less about that,” says Brett, who attended OPC in early 2009. “The friendships I made at OPC and the experiences we had and accomplished together are what I remember the most. Whether platoon mates or pod mates, and even though some of us haven’t talked much since, we all remember who we went there with.”

Tony Palermo is a freelance journalist and is currently working on a book about sex trafficking in Canada. Reach him at tony@tonypalermo.ca or on Twitter @TCPalermo. Visit www.tonypalermo.ca for more.
Print this page

Related
Attention to detail: the value in foot drill class
The future of police recruiting in Edmonton
The professionalization of police training in Canada
Ready or not here comes cannabis