Features Off the Shelf
One Foot in Front of the Other: The journey of a million steps 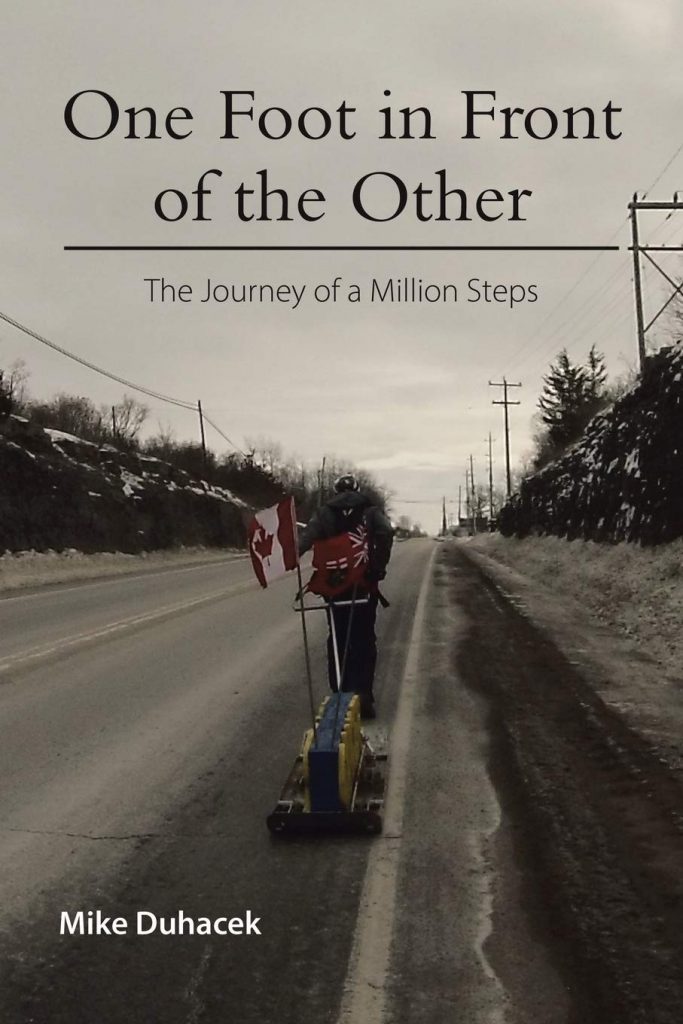 One Foot in Front of the Other: The journey of a million steps By Mike Duhacek

Mike Duhacek is one of the most generous people I know. He’s a proud member of the Halton Regional Police Service, a proud Canadian and a humble and genuine family man. One Foot in Front of the Other is his story, an emotional work of non-fiction that will undoubtedly bring you to tears.

Throughout his life, Duhacek lost family and friends to cancer. In the
book, he writes about how he is frustrated as he watches and supports his mother through her battle and decides he wants to make a difference in the lives of other cancer patients and survivors. An idea is born. He decides to “pull cancer across the entire province and then, he wants to bury cancer”. In the book, he takes us through the development and preparation stages of his “Help me bury cancer” journey.

His plan was to take a month and walk across Ontario—from Windsor to Ottawa—pulling a sled heavy enough to represent the weight of the burden cancer patients feel.

Duhacek starts his venture in early February and very quickly realizes the elements of winter in southern Ontario make it nearly impossible to completely prepare for the journey. Although he was expecting to trench through snow, he soon struggles with issues with his feet and the weight of the sled begins to take a toll on his body. He perseveres, pushing himself to new limits. As he makes his way across the province, going through several small towns and various cities, he encounters people from all walks of life.

This book is predominantly about the people he met, the support of many police services and his perseverance to complete his journey.

He shares stories of strangers, family, friends, cancer survivors and their family members who came out to see him as travelled through their community. He says it’s these people that motivate him to carry on. The generosity that is shown to Duhacek and the donations made to the Canadian Cancer Society are incredible. The support from the police services along the way, the media, the various communities’ businesses and the public is tremendous and overwhelming at times. Despite an aching body, he pushes himself to forge on.

“Nothing compared to what cancer patients deal with,” he writes.

One of my favourite parts of the book is, as Duhacek is travelling through Stoney Point, three residents approach him to show him a newspaper, which features his story and includes his photo. Duhacek responds, “I recognize that guy.” He then proceeds to have an easy, free-flowing conversation with them.

With bits of humour throughout, One Foot in Front of the Other is a wonderful, heartfelt story showing the kindness and goodness of strangers across Ontario, supporting an individual in his dreams to make a difference in the lives of cancer patients and their families. Have your tissues ready.

(Visit www.helpmeburycancer.com for more details on where to purchase the book.)

Related
Mental Health Awareness: Self-Care for First Responders by Stephanie Miloknay and Marc Laferriere
You Break It, You Buy It: Owning the Life Behind the Broken Reflection by Dean Young
Heart of the City by Robert Rotenberg
Guide to Martin’s Annual Criminal Code, 3rd Edition by Lance Triskle