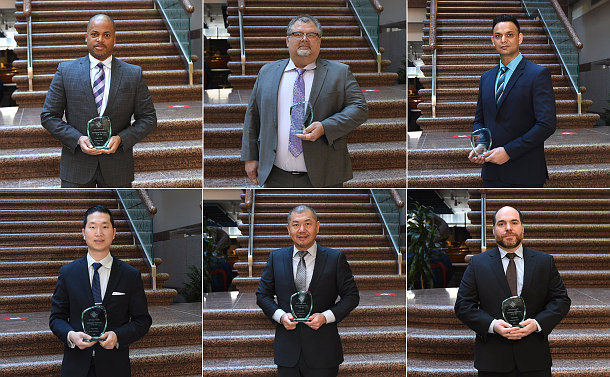 A group of Toronto police fraud and financial crimes investigators were recognized with Investigative Partnership of the Year awards, presented by International Association of Financial Crimes Investigators in March. The officers were part of Project Switch, which also involved Peel Regional Police and various financial companies.

The investigation targeted taxi drivers who would use a payment machine to capture a customer’s PIN number. Once the number was captured using the rigged terminal, a fake debit card would be switched with the real one and returned to the customer. The scammers, armed with the real card and pin number, would then deplete the victim’s bank account.

“This was a team effort with officers from our other divisions using their investigative skills and training to net results,” said Det. John Maciek, one of the lead investigators. “Our members gathered information and shared occurrences among divisions. If we had something that was important, we called each other.”

The other Toronto Police officers recognized were D/Consts. Jas Chahal and Mickael Ferreira of 14 Division, Phillip Gayle of 52 Division, Francis Young of 55 Division and Elliott Lee of 51 Division.

Maciek noted the work in this fraud investigation has continued under Division 52 with the help of D/Consts. Nicole Ozretic and David Byun.