Features
Odds are… gambling is behind recent wave of underworld violence 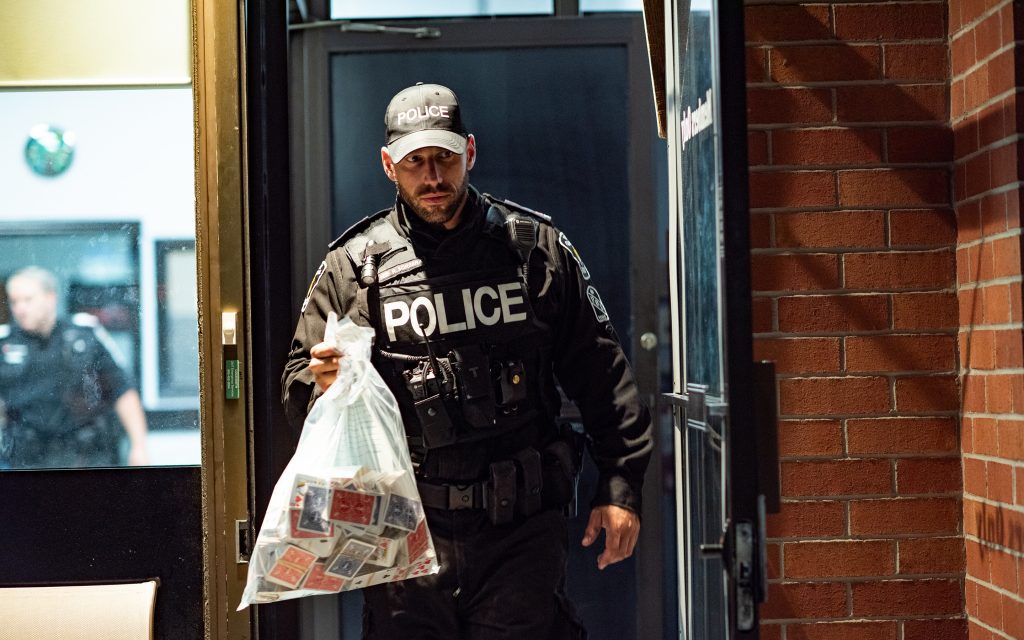 Project Sindacato focused on tracking money being generated and then locally laundered by the mafia in both government-owned Ontario casinos and on an international level. The takedown happened in July 2019. Photo: York Regional Police Service.

Gambling — is it a victimless crime? A game of poker may seem harmless and innocent, but it isn’t. Gambling is a lucrative vice in organized crime, fraught with territorial violence and even murder. The common denominator in the underworld that transcends geographic borders, cultures and genres of any organized criminal group is cash — and gambling provides plenty of cash.

According to the Royal Canadian Mounted Police, illegal betting and gaming is at the top of the list of income generating rackets for organized crime — and business is good in southern Ontario. The experts agree.

In southern Ontario, “history has shown that the Hells Angels and traditional organized crime are working together in the illegal gaming industry,” says Len Isnor, an outlaw motorcycle gang expert and former detective staff sergeant from the OPP’s Biker Enforcement Unit, who retired in 2017. “These card games are all held at locations that limit people from attending. The security is there, but nobody knows where they are. They will get an invitation the day of the game. They attend a location and a van takes them to the gaming location.”

The Criminal Intelligence Service of Canada reported the discovery of Platinum Sports book back in 2012. It involved organized criminal groups “using an off-shore gambling website, PlatinumSportsBook.com, to launder proceeds of crime generated in Canada and make money through illegal gambling,” reports the Criminal Intelligence Service of Canada (CSIS).
“The website was host to thousands of gamblers whose wagers allegedly resulted in millions of dollars in profit for organized crime,” CSIS said.

When this much money is involved, violence is typically not too far behind.

From 2016 into 2017 there were dozens of violent incidents in the Greater Toronto Area (GTA) and Golden Horseshoe region, ranging from homicides, attempt homicides, fire bombings, arsons and drive-by shootings. These were attributable to the brewing turbulence in traditional organized crime, confirms Det.-Sgt. Carl Mattinen of the York Regional Police Service.

“A lot of it dealt with debt collections, gambling collections and loans. This increase in violence caused a lot of attention,” Mattinen adds. He confirmed the traditional organized crime task force was formed by the York Regional Police to target organized crime in the GTA due to increased mob violence.

The investigation evolved into a parallel investigation with the Italian authorities, both focusing on the ‘Ndrangheta, which is the Calabrian faction of traditional organized crime. The 18-month investigation, dubbed Project Sindacato, focused on the Figliomeni crime group, a Toronto-based organization with connected cells in Italy.

The project focused on tracking the vast amounts of money being generated and then locally laundered by the mafia in both government-owned Ontario casinos and on an international level.

“With the amount of money these groups are bringing in, that creates a power struggle within the underworld, so everyone wants a piece of it, whether it be online gambling, or gambling within the café. They make so much money — astronomical amounts of money — that all the other crime groups want a piece of it,” Mattinen says.

The head of the traditional organized crime task force contends these violent acts were all ‘messages’ within the mob. They were intended to intimidate and threaten others during this underworld power struggle in the GTA. This territorial struggle over gambling rackets was at the epicenter of the recent escalating violence in the Toronto and Hamilton areas, Mattinen confirms, “which creates your fire bombings, the arsons, other crimes and then, ultimately, innocent people getting hurt.”

Gambling is definitely not a victimless crime, he continues.

“These aren’t friends in someone’s garage playing poker. It is the furthest thing from that. When you see the large volumes of cash, into the hundreds of thousands plus, that’s when you see the fire bombings, people’s homes shot at. These are messages.”

Project Sindacato, while focused on forensically tracking the money and the eventual forfeiture of assets, sent a message of its own, resulting in several arrests of Figliomeni crime members in Toronto and Italy in 2019. Police netted more than $35 million in assets and arrested 27 individuals, nine of them in the top echelon of the crime group.

Gambling is not a victimless crime. Want to bet?

Check out the January 2020 episode of Blue Line, The Podcast with Stephen for more mafia talk below or click here.