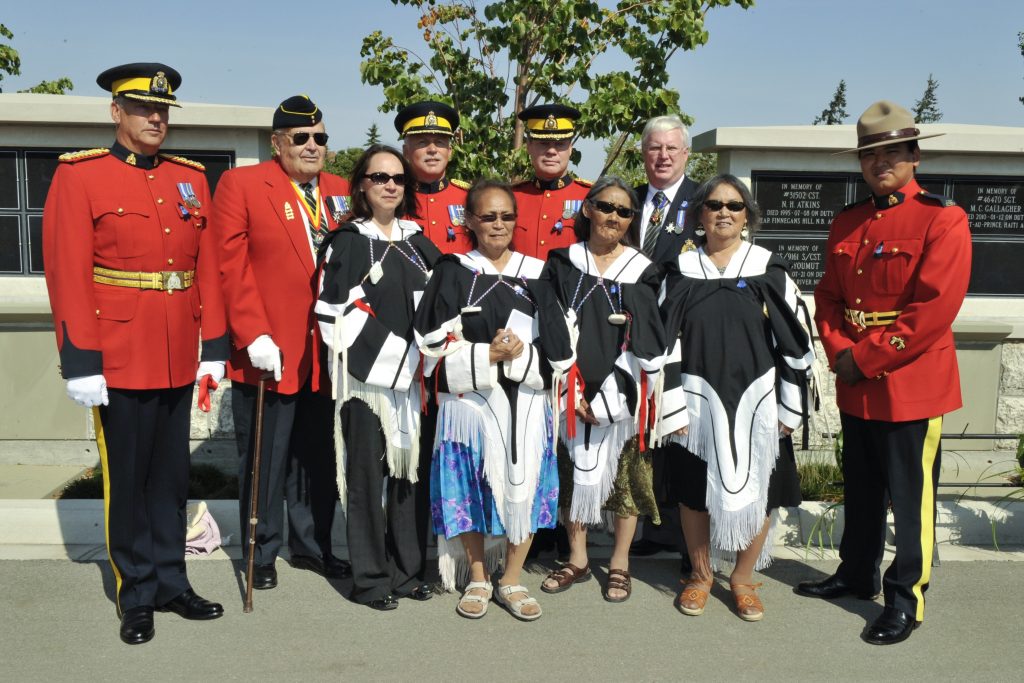 My step-great-grandfather Parkerjuaq (1898-1961) was born at Cape Fullerton on the west coast of the Hudson Bay. He served with the RCMP from 1923 until 1954 and his claim to fame is he was the first Inuk (singular form of Inuit) to be awarded the RCMP Long Service Medal.

My grandfather Andrew Ooyoumut (1919-1954) lived a traditional nomadic life in the Barrenlands until the summer of 1946, when the RCMP picked him and his family up by canoe and took them to the small settlement of Baker Lake, a hamlet in the Kivalliq region.

On June 1, 1946, Acting Sgt. Richard W. Hamilton hired Ooyoumut as a special constable, a job he held until July 21, 1954, when he became the first Inuk to die in the line of duty.

When I read my grandfather Ooyoumut’s service file, I was bothered by the fact that, while he had died on patrol, he was not honoured nationally. Also, his widow, Rhoda Qaqsauq, a 34-year-old woman with four young children, was somehow not entitled to survivor benefits except for two months of his salary. I wrote more about this troubling finding in a Nunavut News/North article in 2008.

Following the publication of my story, my family was informed that on September 11, 2011 —57 years after his death — Special Const. Ooyoumut’s name would finally be included on the RCMP Cenotaph, Honour Roll Book and Memorial Wall Plaque at the annual National Memorial Service in Regina, Sask. My mother, two of my aunts and I attended.

A surge in the interest and pride in our Inuit special constables happened in the aftermath, as various people approached me, eager to share stories of their fathers or grandfathers who had also held that title. The stories of these brave people fascinated me, so I searched the literature to find more. Unfortunately, most books did not refer to special constables by name or even state their rank.

After I was laid off from my position as a senior researcher at an Inuit organization in 2012, I decided to work on an in-depth project on Inuit special constables, with plans to eventually publish a book. Research involved reviewing archival records, including patrol reports from Library and Archives Canada, and members’ service files from Access to Information requests, as well as conducting one-on-one interviews with retired special constables in the Qikiqtani (Baffin) region, thanks to financial support from the Qikiqtani Inuit Association. I hope to secure additional funds for travel to meet those in the Kivalliq region.

It is my objective to profile each of the 130 Inuit special constables (two of whom were women) and their invaluable contributions as members of the RCMP in this book, which I expect to have published in 2019. A biography about each member will be organized in a format similar to what’s in Robert Knuckle’s In the Line of Duty, vol. 1: The Honour Roll of the RCMP Since 1873 (1994) and Michael Barnes’ Dedication to Duty: OPP Officers Who Died Serving Ontario (2000).

The RCMP could not have managed in the Arctic without the assistance of Inuit special constables and this was especially true in the early days. For example, while doing my research I discovered a photo of a 12 year-old Inuit boy who acted as an interpreter and went on patrol with the RCMP in the western Arctic. This boy, Peter Natit, was later hired as a special constable.

These are Canadian hero stories that have never been told before. It is time to highlight the work of our Inuit special constables so this part of our Canadian history is finally told.

Deborah Kigjugalik Webster is a heritage researcher and author who lives in Ottawa. To learn more about Inuit special constables, visit her Facebook page @InuitSpecialConstables or reach her at websterdeborah@hotmail.com.
Print this page