Features
Move it on into the Clear Zone

Peel Regional Police is thinking differently about crime patterns related to specific industries in an effort to reduce incidents of crime, one program being the Clear Zone Robbery Prevention Program. 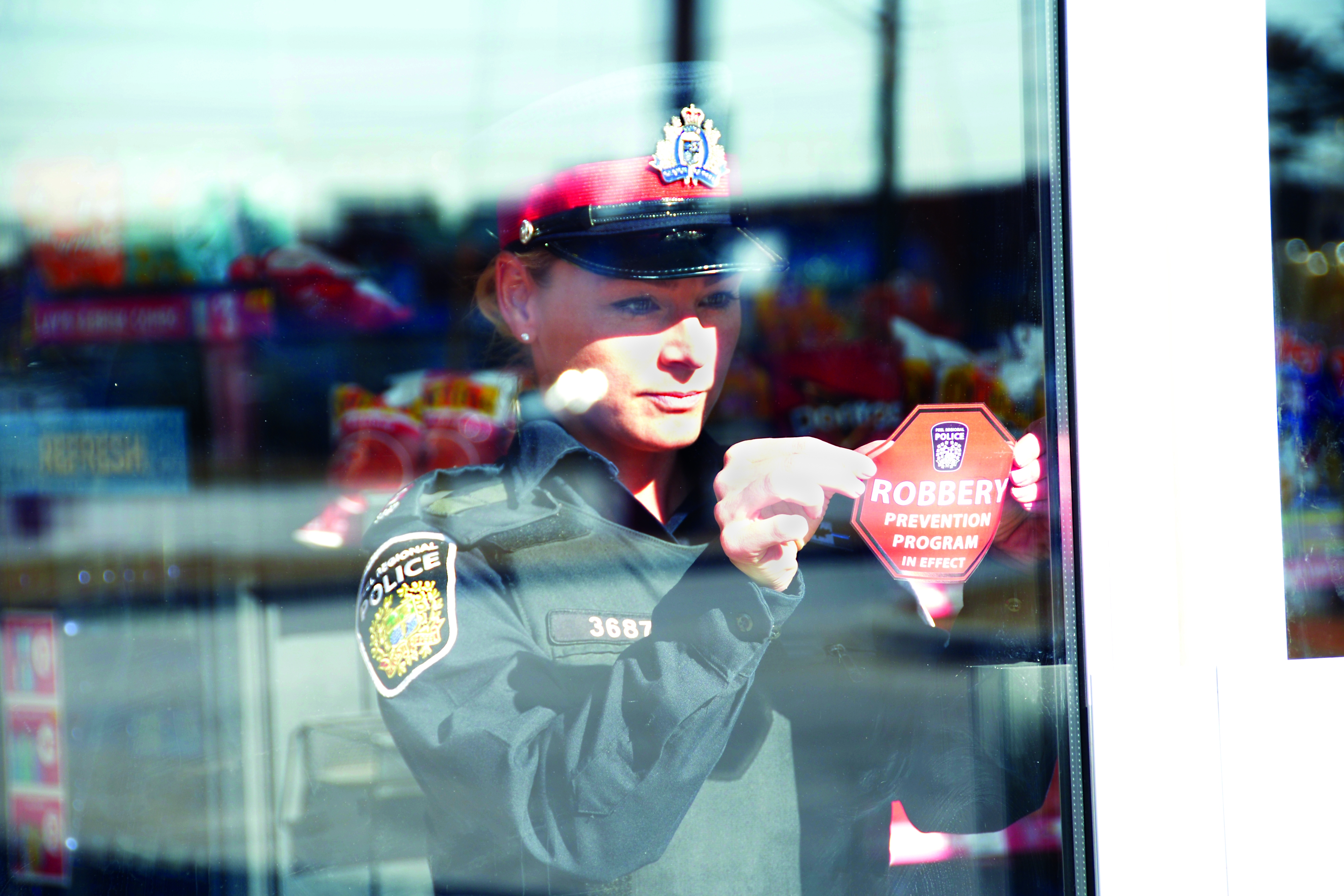 Clear Zone was designed to reduce offender behaviours, reduce the incidents of robberies and increase the sense of security among users of retail businesses, as well as the level of knowledge in crime reduction strategies. Clear Zone was formulated based on researched Crime Prevention Through Environmental Design (CPTED) principles, environmental and situational criminology, and paired with Crime Prevention Through Community Engagement (CPTCE).

Robbery offenders generally operate when business traffic is minimal and when concealment is more likely. The offender may enter a store and become concealed behind heavy window signage where they cannot be seen by passing motorists, pedestrians or police patrols that may be driving by, which puts the store at risk. Historically, window signage has been an issue in the gas-convenience store industry. Signs decrease clear sight lines into and out of the property and have been identified as a causal factor for robberies in numerous studies.1

The Clear Zone program is designed to strip away the offenders’ anonymity through strategic placement. This is accomplished by identifying a prominent window that strategically overlooks the cash handling area and ensures that promotional materials do not obstruct the view into and out of the store.

The majority of transactions, including robberies, take place at the sales counter. Removing signs from the window eliminates the cover it provides for an offender. The prominent window is then highlighted and defined through the application of the blue Clear Zone decals that borders the window. The decals provide a constant reminder for retail staff to always keep the area clear within the decals. They act as a visual deterrent by fostering a sense of police presence through the Peel Regional Police crest and the printed words “Robbery Prevention Program” on the double-sided decal. The decals generate conversations between staff and customers, as well as drawing witness potential by getting people both inside and outside of the store to pay attention. Ultimately, the program strives to deter criminals from targeting the store location altogether because the risks of getting caught are perceived to be higher.

When implementing the program, several criteria must be met:

The program can be expected to have a limited effect where this fundamental relationship is not present.

Circle K, formerly known as Mac’s Convenience Stores Inc., took the opportunity to partner with Peel Regional Police in 2013 and implemented the Clear Zone program into all 14 of their locations in Peel from November 2013 to January 2014.

With the Clear Zone program’s success at their locations in Peel Region, Circle K adopted the program and rebranded the decal. In January 2015, they implemented Clear Zone into four “high risk” store locations in Thunder Bay, Ottawa and Toronto as a pilot program. Since then, the overall crime incidents have dropped down 92 per cent, according to recent data.

With continued success outside of Peel Region, Circle K rolled out a second set of installations into four additional “high risk” locations on May 27, 2017. Robbery incidents have decreased by 100 per cent to date at these spots.

It’s important to mention the program is not designed to make retail locations “robbery-proof.” It is intended to improve the function of the space while addressing a number of safety and security issues by providing ways to improve the property’s natural surveillance, natural access control and territoriality.

If we can reduce incidents of even just one robbery, then we are off to a great start in reducing victimization and promoting public safety.

Peel Regional Police will be presenting more information about the program at the International Society of Crime Prevention Practitioners (ISCPP) Symposium being held in Niagara Falls in September 2018.

Amy Boudreau is a Peel Regional Police constable with Crime Prevention Services. Email her at amy.boudreau@peelpolice.ca or call 905-453-2121, ext: 4018.
Print this page