Treaty Three Police Service and its technology partners demonstrate how a mobile device is the only tool needed to bring the office to the officer, cutting costs & strengthening accessibility 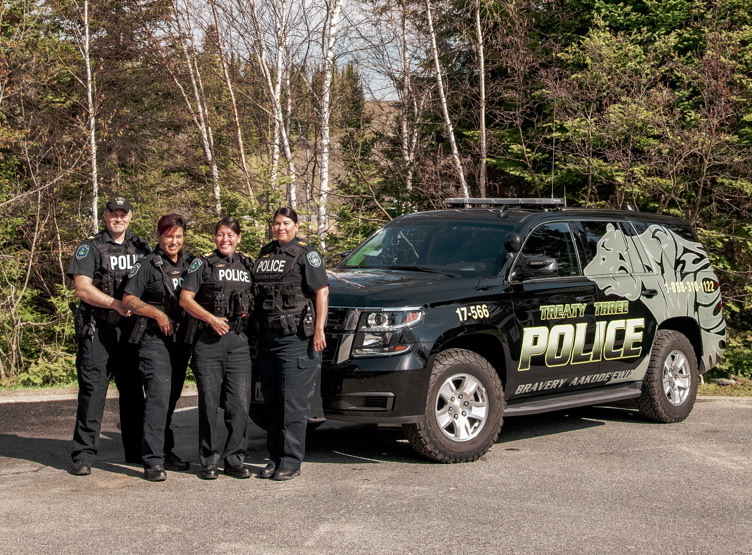 The first 2019 Tahoe with the mobile equipment features the striking design of the Bear. This vehicle includes both the English and Ojibway wording for the Grandfathers Teaching. Photo: Andrew Rowe

It was years ago when Jeff Skye, now Chief of Police for the Treaty Three Police Service (T3PS), asked the agency’s Chief Information Officer why he couldn’t just hook up his iPhone and see all its information on a bigger screen. It’s difficult to work on such a small screen after all, he says. Where is the interoperability? The seamless transition?

Today, T3PS has taken the answer to that question one step further and is at the forefront of what could be called a revolution in policing technology. The Northwestern Ontario agency is preparing to take policing fully mobile and enhance its in-cruiser solutions with a major update— the only in-car tool previously available to the officers responsible for over 142,000 square kilometres and almost 20,000 people is their radios.

T3PS is the first police service in the world to deploy the new Samsung DeX MDTs (Mobile Data Terminals) to their cruisers.

“There is a fundamental worldwide need and momentum to bring information and systems access to frontline officers,” says Tim Grimes, enterprise mobility sales manager at Samsung. “Samsung’s DeX takes this leap forward… made possible by our strong partner ecosystem.”

This choice of deployment is based on the #MobilityFirst initiative at FSET Inc., a Canadian information technology and services company in Kenora, Ont., which is working towards having all T3PS officers issued a mobile handheld. They are able to cradle their Samsung Galaxy device in the cruiser (as well as at a desk with a monitor if need be), which then re-formats the device output in desktop mode using the 12-inch touchscreen, keyboard and trackpad fitted for the vehicle.

As demonstrated at the 2019 First Nations Chief of Police Association (FNCPA) Conference, T3PS’s vision of a single computing device for officers is about to be a reality.

Skye says he plans to see five fresh 2019 Chevrolet Tahoes, outfitted by DARTA Fleet Solutions and D and R Electronics out of Bolton, Ont., with the proprietary Dovetail solution for docking, hitting the roads by the end of July.

“We’ll give each officer a chance to try one of the new vehicles and unveil them to all of our 23 remote communities,” Skye says. “Most of our communities have cell service and we’re going to have these officers out in these beautiful vehicles, visible, engaging — not sitting in the office because they need the connectivity. They’re mobile.”

It’s an exciting time for the officers — like a new toy at Christmas, according to the Chief — but it’s been plenty of hard work and complex collaboration to get T3PS this connected.

Looking for a solution

As one of the largest First Nations police services in Canada, T3PS sometimes requires its officers to travel upwards of a hundred kilometres to each location. Many times, officers are working alone, the nearest backup being hours away. MDTs were not in the previous budgets due to funding and the agency was unable to provide handheld devices to its officers.

“Officers required a mobile solution that would allow them to communicate through voice text and email, as well as a way to run queries, enter reports, capture evidence, and other operational tasks without having to make the long return trip back to their home detachment where they would begin their day,” says Dave Brown, CEO of FSET. “Finding a balance in meeting the security requirements with a cost-effective solution that allowed for ease of use proved challenging.”

While T3PS couldn’t afford the old standard MDTs, the project they embarked on with FSET and the selected Samsung DeX MDTs were one third of the price, Brown notes.

“That’s why we wanted to try them out,” Skye says. “So, we became the first service to do so. It just makes sense. You have your Android with you and if you happen to jump into a cruiser, you put it in a docking station and away you go. All you need to install is a monitor and keyboard, and you’re off to the races.”

A process of many hands

“Do you remember the BlackBerry days?” Skye asks. “Those were the only devices you could use for security requirements…”

He’s relieved T3PS’s “mobility first” initiative has received all its security clearance — no easy feat when it comes to smartphones.

The project will see all officers issued a Samsung Galaxy handheld device, managed through a Unified Endpoint Solution.

The Information Technology Unit (ITU) at T3PS proposed the Personal Identity Verification (PIV) framework as an alternative to replacing the existing PKI (Public Key Infrastructure) and Common Access Cards (CAC) being used within the province and country at the time. T3PS began the research and development, and the Proof of Concept (PoC) for this new model by working collaboratively with the Ontario Provincial Technology Information Co-operative (OPTIC) Security and Mobile Committees, Ontario Provincial Police (OPP), and Entrust Datacard. The PIV framework would also allow for the use of Derived Credentials or PIV-D, which would provide the Multi-Factor Authentication (MFA) required on a mobile device.

An independent Threat Risk Assessment (TRA) was then conducted on the PoC and with a seal of approval from OPTIC, the next step was service-wide deployment.

One application to be deployed would be Mobile Police Assist (MPA) Niche from Mobile Innovations. This would provide access to the Niche Records Management System (RMS) used by T3PS and other agencies within the OPTIC collective from their mobile device.

The Axon Capture application and Evidence.com portal would be used for the agency’s Digital Evidence Management (DEM) Solution. This allows for the collection of audio, photos and video evidence on the mobile devices. It also provides the members with the ability to securely share in the data being collected during its investigations with their partners, such as the OPP.

The docking station also provides a device cooling system that ensures product longevity and stability, he adds, as well as six USB A ports for peripherals, power for phone charging and HDMI port for an external monitor.

Meanwhile, Windows Virtual Desktops from Citrix provides members with the ability to run their windows desktop applications on the same Samsung Galaxy device, while FSET provides the experience, infrastructure and resources to pull it all together and make it work.

Data from within the Windows Virtual Desktops never actually touches the device, providing a more secure solution, Brown further explains. “Not only is it more secure, but it also requires less user support and administration. Investment is made on the back end and only a light touch is required on the endpoints.”

The smartphone, the docking system, the software, the digital evidence management solution in the Cloud — it all makes for a seamless transition between the vehicle and the desk, Alkema concurs. And it couldn’t have happened without all these technology partners coming together with the common goal of ensuring officers always have access to applications, whether they’re on foot, in cruisers or in the office.

Momentum in the future

At the cusp of deployment, Skye says he isn’t worried about kinks to work out or challenges the new technology might bring once actually in use. He says he’s confident they have the capabilities to troubleshoot and strong partners who are available for support.

“I like to say it’s the next best thing in technology,” he says. “In my days when I was on the road, we were doing hand-written reports on the side of the road. Now, 25 years later, you get to do it on your smartphone, and in remote areas. I can see the momentum growing very fast here. For a third of the price, it does the same thing an MDT does — it just makes sense.

“We’re very excited about it,” he adds. “As a small First Nations police service, it’s something not many would have dreamed we’d be piloting, but we dream big here at Treaty Three.”

Mobile technology isn’t the only thing T3PS is doing that’s capturing attention. The service has also launched fresh designs for their entire fleet that honour the sacred Seven Grandfathers Teachings, widely shared in North American Indigenous culture as a way to interact with your fellow human beings.

“The Seven Grandfathers Teachings have always been very present for us,” Skye says. “Our service prides ourselves in following these teachings and one of our Elders, through ceremony, came up with an eighth Grandfather Teaching called Forgiveness.”

Forgiveness will eventually be illustrated on a police vehicle, too, in the form of a rock.

The others teachings are:

The first 2019 Tahoe with the mobile equipment features the striking design of the Bear. This vehicle includes both the English and Ojibway wording for the Grandfathers Teaching as well.

Skye says more Grandfathers Teaching designs are on the way.