Despite the reasonable manner in which a strip search was conducted, its location nevertheless rendered it a s. 8 Charter breach. In R. v. Pilon, 2018 ONCA 959 the police obtained a warrant under the Controlled Drugs and Substances Act to search a motel room. When police entered the room, they arrested all three of its occupants, including Pilon. 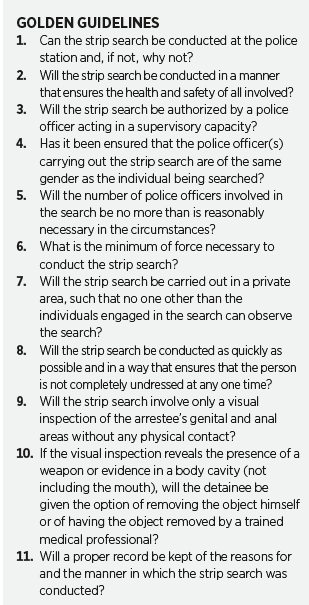 Pilon resisted arrest, but was eventually handcuffed behind his back where he was seen repeatedly trying to place his hands in the front and back of his shorts. As police searched him they noticed he was wearing two pairs of shorts. They removed the outer pair of shorts and discovered a roll of cash tucked in the pocket of the inner pair of shorts.

Police looked inside the second pair of shorts and discovered Pilon was not wearing underwear. An officer saw the top of Pilon’s buttocks and an elastic band attached to his penis. Pilon remained non-compliant and continued reaching inside his shorts. Believing he was attempting to hide items and concerned for safety, police took Pilon to the motel room bathroom and strip searched him.  Pilon’s waistband was pulled away from his body so his genital area could be viewed. An officer, wearing surgical gloves, reached in and pulled out a pill bottle containing fentanyl patches and a ball of electrical tape with crack cocaine inside which were attached by the elastic band.

At trial in the Ontario Superior Court of Justice, Pilon did not dispute the search warrant, conceded his arrest was lawful and agreed the police were searching for evidence related to his arrest. Pilon did, however, argue that the strip search was unreasonable because the police lacked exigent circumstances to justify it be conducted in the field (not at a police station).

The trial judge found there were two strip searches. The first one – which did not breach s. 8 of the Charter – occurred when the officer pulled Pilon’s inner shorts away from his body and observed the elastic around Pilon’s penis. The judge found this was an accidental strip search – the officer did not anticipate Pilon would not be wearing underwear. The search was not very intrusive, was discontinued once the elastic band tied to Pilon’s penis was observed, no one else saw Pilon’s genital area and there was no bodily contact.

As for the second strip search, it too was reasonable. Although there was no basis for police to believe that the item being concealed was a weapon, the judge concluded the risk to the loss of evidence (Pilon’s attempts to dispose of drugs or otherwise prevent their detection) and the danger to Pilon (the risk that he would harm himself if he was placed in a cruiser and taken to the police station) amounted to exigent circumstances that rendered a strip search in the motel room reasonable.

Moreover, the second strip search was conducted in a reasonable manner. It was minimally invasive, very brief, conducted in a separate room and at no time was Pilon naked. Only one officer saw Pilon’s groin area. This officer wore gloves and, if there was any contact with Pilon’s genitals, it would have been fleeting and incidental to the removal of the drugs. Furthermore, the search was only conducted after Pilon repeatedly refused to yield the drugs. Pilon was convicted of possessing crack cocaine and fentanyl for the purpose of trafficking and sentenced to 30 months’ imprisonment.

Pilon appealed his convictions to Ontario’s top court, arguing that the two strip searches violated his s. 8 Charter rights and the trial judge erred in finding otherwise. Justice Hourigan, speaking for the Ontario Court of Appeal, agreed with Pilon and concluded that the strip searches were unreasonable. In his view, the strip searches should have been conducted at the police station rather than in the field.

Strip searches
A strip search has been defined by the Supreme Court of Canada in R. v. Golden, 2001 SCC 83 as “the removal or rearrangement of some or all of the clothing of a person so as to permit a visual inspection of a person’s private areas, namely genitals, buttocks, breasts (in the case of a female), or undergarments.”
Strip searches can be conducted as an incident to arrest provided (1) they are conducted for the purpose of discovering weapons in the arrestee’s possession or evidence related to the arrest, (2) the police establish reasonable grounds justifying the strip search in addition to reasonable grounds justifying the arrest and (3) the strip search is carried out in a reasonable manner.

A strip search should be conducted at a police station unless there are exigent circumstances requiring it be conducted in the field (prior to being transported to a police station). As well, they should not be carried out as a matter of routine nor does an arrestee’s non-cooperation and resistance necessarily entitle the police to engage in behaviour that disregards or compromises their physical and psychological integrity and safety. A series of guidelines are also to be considered in determining whether a strip search is conducted in a reasonable manner (see Golden Guidelines below).

In this case, the Ontario Court of Appeal found both strip searches to be constitutionally non-compliant. As for the first search, it was not accidental. Although the officer did not anticipate that Pilon would not be wearing underwear, a strip search is defined as including the rearrangement of some or all of the clothing of a person so as to permit a visual inspection of a person’s undergarments. Hence, when Pilon’s waistband was pulled back in an effort to view his underwear, he was strip searched. The police, however, failed to establish there were exigent circumstances that justified a field search on safety grounds or the need to preserve evidence.

“[The officer] testified that he observed [Pilon] attempting to reach into the waistband of his shorts,” Hourigan said. “Although he did not know what [Pilon] was reaching for, it does not appear that his concerns were safety related. Instead, he had a hunch, based on prior investigations, that [Pilon] was carrying drugs in his groin area. However, [the officer] did not attempt to justify the first strip search on the basis that there was a real possibility that evidence would be destroyed.”

As for the second strip search it too failed the reasonableness test. There were no exigent circumstances, either the risk of the loss of evidence or a need to protect safety, that warranted a strip search in the field:

• Preservation of evidence: Hourigan concluded there were no exigent circumstances related to destruction of evidence. Pilon “was in a confined space, handcuffed and surrounded by police officers. If he somehow was able to dispose of the drugs undetected, it is a common-sense inference that they would be easily retrievable by the police. Further, there would be strong circumstantial evidence that [Pilon] was in possession of the drugs.”

• Safety concerns: Since there was nothing to lead the officers to believe the object attached to Pilon’s penis was a weapon, there were no exigent circumstances that justified a search for a weapon in the field. Nor did, as the trial judge found, Pilon’s ongoing efforts to gain access to what was hidden in his shorts and his level of physical resistance create a risk that he would harm himself if he was placed in a cruiser and taken to the police station for a strip search.

Admissibility analysis
Although the Court of Appeal held that both strip searches breached s. 8 of the Charter because the police failed to establish exigent circumstances justifying field searches, the evidence was nevertheless admitted under s. 24(2). The police acted in good faith. There was no evidence the searches were routine practice and, had the strip searches been conducted at the police station, they would have been reasonable.

“Other than location, they were textbook examples of how strip searches should be conducted,” said the Court of Appeal. Furthermore, the evidence was highly reliable and the charges were very serious.

Pilon’s appeal was dismissed and his convictions were upheld.