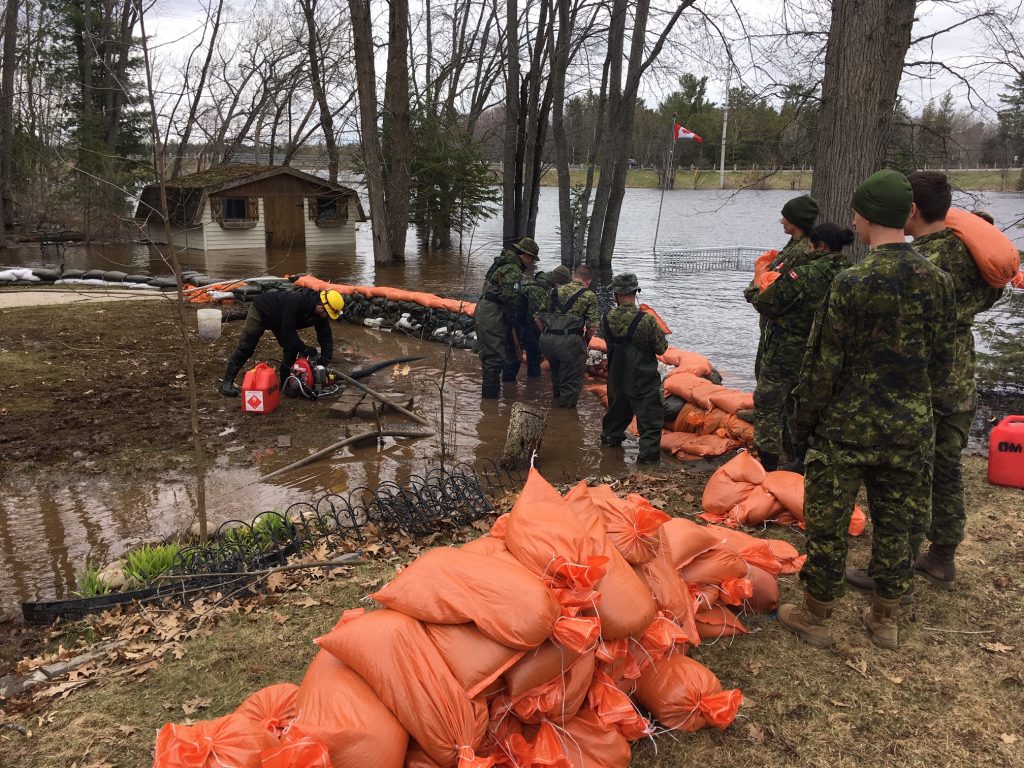 In the spring of 2019, I was deployed to the Ottawa River Valley in eastern Ontario to support OP LENTUS, the Canadian Armed Forces (CAF) response to natural disasters in Canada. We were deployed as a result of extreme flooding in the area, which threatened the homes of thousands of residents.

The rising water levels along the river were a result of a combination of factors. These included spring melt, record-breaking rains and the release of water periodically from a dam further upstream. This combination—mixed with occasional warm days that increased the melt speed—made for 100-year record water levels.

By the time the river surged to threatening levels, many residents were behind the curve to act to protect their homes or to evacuate. Furthermore, by the time the military was called out, many homes were already overcome by rising water levels.

On the ground, we were staged at CFB Petawawa and then sent out to the Town of Westmeath, operating out of the fire hall. I made several observations about things that worked and things that didn’t during our operations.

Firstly, it’s not something new that with spring comes rising water levels. If you live in a flood-prone area, making advanced preparations and being abreast of changing water levels and weather can go a long way in giving you time to deal with impending disaster. These can include building sandbag walls, procuring water pumps, as well as staging food and supplies at an alternate location should you have to leave.

Some residents found that, although their homes were relatively safe from rising flood waters, the roads to get to and from their houses became submerged and impassable, effectively cutting them off from the means to procure supplies and be reached by emergency responders should they need it. We ended up delivering groceries and drinking water to one such cluster of residents on several occasions while conducting welfare checks.

The contamination of flood waters with biomaterials from nearby farms and washed-out septic beds was one significant problem faced by responders. Even wearing gaiters, troops needed to decontaminate. This also impacted the residents as many people in the area relied on wells for their drinking water. These same wells immediately became unreliable for clean water once the river rushed in.

Depending on the area, utilities were being cut off for overall safety. Gas and power lines were being shut down by the local utility companies, effectively bringing residents to a “dark age” scenario. Cellular service was almost non-existent in the area. The only internet connections were at the Command Post and even then, it was limited to a small corner of the complex and here it was ultimately unreliable with so many people trying to use it at once. This posed compounding problems with Command and Control, logistics and response—and that was just on the military side.

For the residents, they too faced these same communications challenges as well as rising water levels, food shortages and isolation. Those that had either evacuated early or had prepared before the waters broke over the banks were in a far better position than those who had relied on hoping nothing would happen. It became a case of “too little, too late” once the water rose in the night and homes began to flood. Sandbag walls were not adequate at that point to keep the waters away.

It was heartbreaking to see the damage and despair while people desperately tried to stop the rising waters. This was matched by the overwhelming sense of community I witnessed by the residents collaborating to help in ways I’d not even thought of. Some people used boats to get in and out of town to acquire groceries and transport it back to stranded residents. Many of the people in the surrounding area donated food and their energies to feeding the troops while we were there. It was incredibly touching to return after a long day to a hot, home-made meal. Most troops would be cold and wet from the contaminated flood waters and the steaming plate of good food graciously boosted morale while providing much-needed calories.

As an example of a preparation plan for people who may find themselves in such a predicament in the future, I would offer the following as a guideline:

I thank the residents of Westmeath, Ont. for their hospitality and generosity during my time in their township. You made all the difference; I’m just sorry we couldn’t do more.

Boris Milinkovich, CD, has served 20 years in federal public service. He has served with Canada Border Services Agency and Transport Canada in Marine & Aviation Security and Training & Liaison. He is a member of the Canadian Armed Forces (Reserve) and has served in Infantry, Intelligence and Military Police (current) capacities since 1998. He is currently the owner and training director at True North Tradecraft, teaching specialized courses in covert methods of entry, counter-custody and more.

Related
The sun never sets on Canadian Military Police
Stronger together: An integrated approach
Leaving the badge behind for international corporate security
Kevin Junor: “Corrections is all about people” • VIDEO