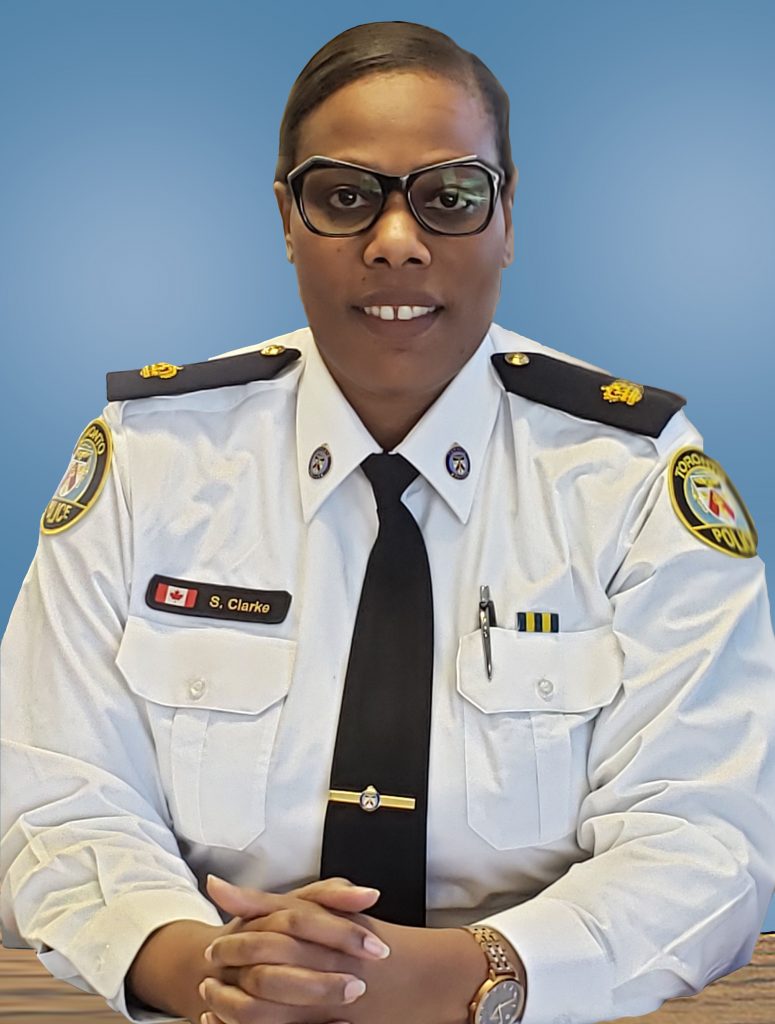 In an outcry heard around the world in response to the killing of George Floyd on May 25, 2020, in Minneapolis, Minn., thousands took to the streets to advocate for police reform. Law enforcement, including Toronto police officer Stacy Clarke, attended demonstrations in uniform to ensure civilian safety. Insults like, “You’re a shame to your race!” were hurled at her but, rather than taking offence, the 24-year veteran saw it as an opportunity to empathize with their pain, exemplify leadership and consider the confrontation a teachable moment; an opportunity to bridge the gap between the badge and the community.

“I agreed that changes are needed, but explained that it’s not something that can be done solely from the outside,” she said. “If there’s no one on the inside to amplify the voices on the outside, change can’t happen.”

Clarke was recently promoted to superintendent and is now one of the highest-ranking Black police officers in Canada. She’s also the second Black female superintendent in the country’s history and the first to hold the rank within the Toronto Police Service (TPS). She said situations like what she experienced at last summer’s protest exemplify the value of strong community relations. She attributes her lived experience as a Black woman to better connecting and understanding diverse communities, and to her success in moving through the ranks, ultimately breaking the glass ceiling by becoming a superintendent.

Clarke began her career at the age of 21 after graduating from the University of Windsor with a degree in psychology and criminology. Around that time, TPS had started making a concerted effort to hire more women and minorities. Because Clarke had a university degree and was a competitive track athlete, recruiters considered her a great candidate.

“When I was first approached about joining, I told them I’d never even considered a career in policing because I’d never met a Black female police officer,” she said.

Though her plan was to pursue a law degree, she said what finally convinced her to join the force was a conversation with Terry James, Toronto’s first Black female police officer (retired in 2010).

“She said a sentence that has driven me throughout my career and ultimately led me to where I am today,” Clarke explained. “She said, ‘You’ve got to be a part of the solution, not the problem’.”

So, Clarke decided she would commit to five years within the service and would then reconsider pursuing law. She officially began her career on April 14, 1998 at the 51 division in Toronto. It’s been 24 years since and she’s never looked back.

Her early days were spent working in the Community Response Unit and Youth Bureau and Intelligence. She then spent four years between the Homicide and Divisional Policing Support Units before being transferred to the Police College in 2008. Two years later, she was promoted and was assigned as a sergeant at the 13 Division. In 2012, she was transferred to 22 Division where she worked in the Primary Response Unit and the Detective Office. She was promoted again in 2016 to staff sergeant, where she led the Learning Development and Standards Section at the Police College before moving into the senior ranks assigned to 14 Division as the second in command. This is where she worked when George Floyd died last May.

The impact of George Floyd

Clarke was at work when the video of Floyd’s death began circulating online. When she finally watched it in its totality, she said she was “shattered.”

“I didn’t know what to do with myself because I have kids who were asking questions and there was no book on this one. Then, I thought of the members in my organization.”

In recent decades, there have been several cries for change regarding police-Black civilian interactions across the United States but there hadn’t been a lot of legal accountability for police. The Floyd case was different.

“If there’s no one on the inside to amplify the voices on the outside, change can’t happen.”

When protests erupted around the world, police had the uncomfortable task of monitoring them. While some found this unbearably awkward, when Clarke was targeted, she didn’t take the comments personally.

“Police got painted with one brush but I recognized that they were upset at my uniform and what it represents, not by me personally,” she said. “I was emotional at some points too because I felt a lot of the pain that the community was feeling.”

She embraces emotion and always assures inquirers that being human doesn’t make officers “weak.” In fact, she believes this is a common and detrimental misconception.

“I think it’s important to show emotions and humanity in dynamic situations,” she said, referencing the protest. “It shouldn’t be either/or.”

Clarke succeeded in transmitting this message, not only through words but through action. With the organizer’s blessing, she led a march with a group of protesters on their route from the Christie Pits neighbourhood in Toronto to police headquarters. For her, this was a chance to exemplify leadership to the community and to fellow officers.

“I think it’s important for police to be a part of the community. We’re here to serve first, then to protect,” she said. “I felt that if I was silent, I was complicit. It was an opportunity to show the public that members of this organization are here every day, trying to do the right thing. We don’t always do it right, but we are determined to try.” 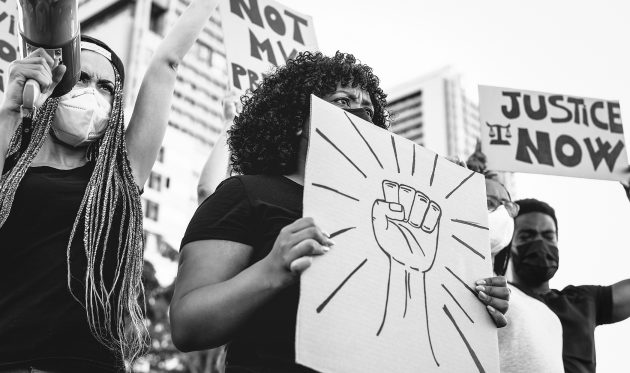 But, this type of reaction wasn’t isolated to Clarke. She said she was very proud of the way her unit responded to similar situations and to adversity, but said it didn’t happen overnight. Having predicted an event of this nature, she had started having conversations about inequity and inequality within her division.

“We had been having conversations about racial inequality within our division for a while, so they were ready for it,” she said. “At the time, I honestly didn’t know I was preparing them for anything, but I had instilled within our members that we had to get comfortable with the uncomfortable; that we can no longer, as a policing agency, think that we can enforce our way out of all of this. We just can’t.”

Clarke was appointed to the role of superintendent in the Community Partnerships & Engagement Unit in an interim capacity last July and was appointed the permanent position in February.

“I’m still not over it, but recognizing there are only two of us in all of Canada makes you stop to think. It’s clear that opportunities just aren’t afforded to women or minorities in the same way and, if you don’t have the opportunity to showcase your skills or resources in the same way as your colleagues, you can’t fulfill your potential.”

Clarke broke the mold. Now, in her new role, she’s using her voice to share her story and speak out on issues. She admits to facing adversity throughout her career, particularly due to her intersectionality. For instance, she had to plan when—and if—she would or could have children and how that would affect her career (what unit she was in, how long it would take her to return to full capacity, etc.). She also had to deal with unconscious bias and (often unintended) alienation that came with being one of the only Black female officers in the field. Now, she’s working to change public perception and bridge the trust gap that’s eroded between police and the public for years. This, she said, starts at home—inside the service. An advocate for leadership embracing progression and setting the tone within their service, she’s been calling for police to have discrimination discussions for years. She said she also started pushing for more nuanced diversity training around 2015.

“We’ve always had diversity training but I’ve been saying it needs to be more progressive. It needs to be training that allows us to reflect on our own unconscious biases, to be uncomfortable and examine what the delivery of policing services looks like, recognizing we all have different lived experiences and the relevance of intersectionality.”

This is why, she said, there’s also a greater push for more diversity in recruitment. People tend to feel more othered when they can’t relate to authority figures. In fact, she was actively working to recruit about seven Black candidates last spring, most of whom dropped out after the death of Floyd, citing community pressures.

Clarke believes that officers are the best tools for recruiting, but if officers don’t feel safe, they won’t be good advocates for the service.

“The reason why we’re having such an issue with trust in the communities is because we have an issue with trust within our own organization. We need to recognize that this needs to be addressed in a very methodical way because you can’t fix outside unless you fix inside,” she said. “We need more diverse voices at the table. Culture takes a long time to shift, but we can’t do that if we’re not at the table.”

Throughout her 24 years, Clarke has felt a major cultural shift within TPS since joining but said there is still work to be done. According to Clarke, the key is diversity in recruitment.
“I’ve definitely seen a change but we’re still struggling with inclusivity throughout the ranks, both on the racial and gender side. I think we can do better. It’s time.”

A catalyst for change

On April 20, after three weeks of testimony from 45 witnesses, a 12-member jury found the ex-officer Derek Chauvin, 45, guilty on all three counts he faced for his role in the death of Floyd. Clarke said she avoided watching the trial as it was too painful to relive the events in lurid detail, but she did watch the verdict.

“I expected to feel relieved but I didn’t. We’re still waiting to see what the sentence will look like but I was able to tell my kids that is justice.”

Floyd’s death, she said, was a pivotal moment in history; a call for evolution within police forces in the United States and abroad. This change, she said, starts with leadership.

“At the end of the day, this verdict is just acting as a catalyst for change,” she said. “It’s not going to bring George Floyd back but it’s definitely a step in the right direction.”