Features Q&A
Kevin Junor: “Corrections is all about people” • VIDEO

After spending 34 years in the Canadian Armed Forces (Reserves), Kevin Junor found his way into corrections, though it was never a field he thought he’d develop an interest in. Today, he is the deputy superintendent of administration at the Ontario Correctional Institute (OCI) in Brampton. He shares with Blue Line his passion for leadership development, change management and his hopes for the corrections field. 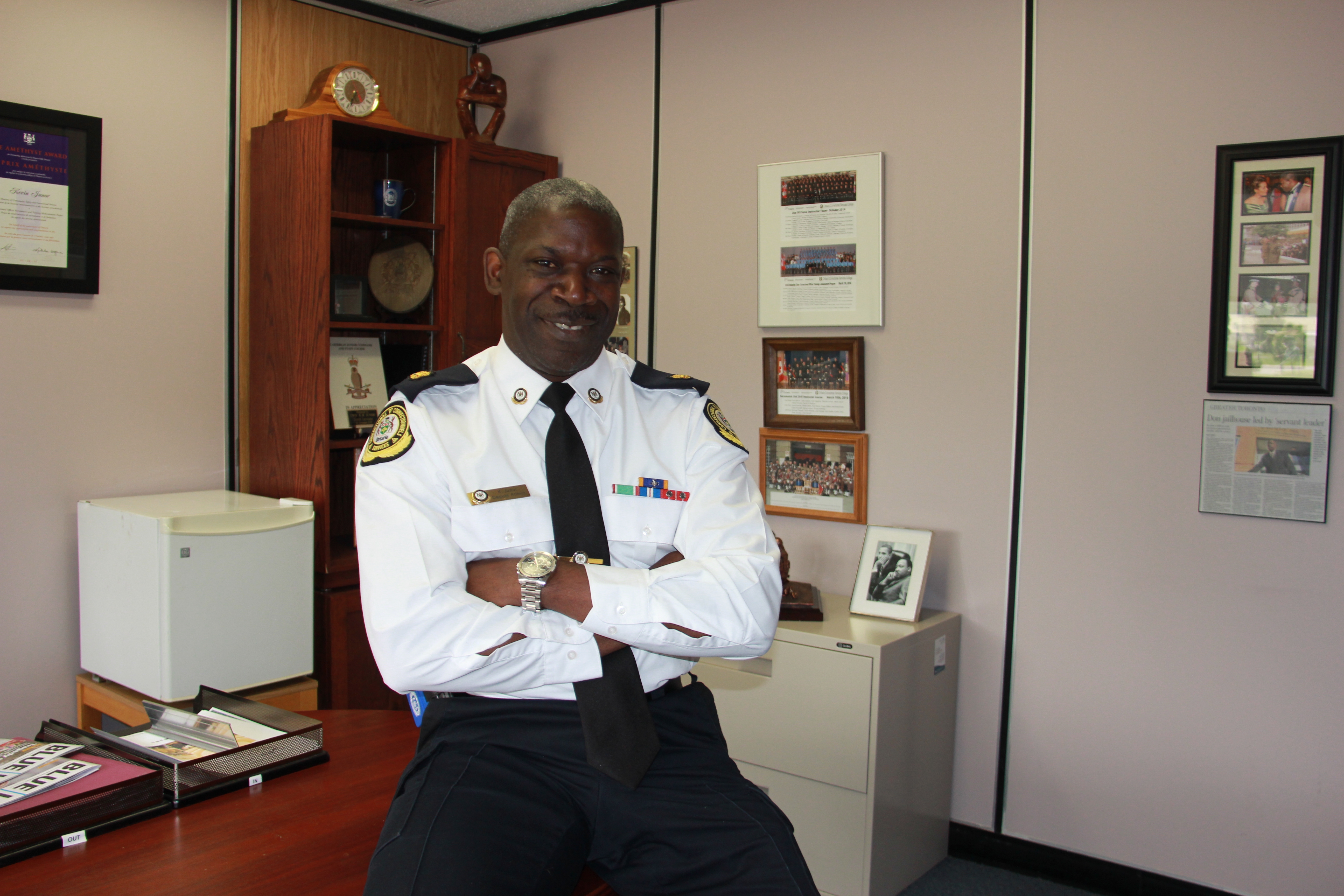 Q: Your career started in the military. What was your experience like there?
I joined the Canadian Forces Reserves in 1980, as an infantry soldier in the Toronto Scottish Regiment. A recruiter came to my high school and said I could have a summer job for as long as I wanted it. By the time I was 18, I was teaching the recruit course.

The military in general is known as the best training ground for leaders and they identified my leadership potential right up front so I was constantly challenged. You are pushed to your breaking point and then they give you the skills to make improvements. The military was a period of continuous growth for me and I developed as an infantry leader.

In 2003, I was appointed as a diversity advisor for the Canadian Forces Senior Leadership Team. I was a regimental sergeant major for the Toronto Scottish Regiment and I later deployed as a senior military advisor to the Republic of Sierra Leone Armed Forces in 2007, where I developed the first leadership course for regimental sergeant majors in Sierra Leone. As a descendent of the Jamaican Maroons, this was a pivotal moment for me — being able to give back to Africa. It was one of my most memorable moments.

Q: How did you find yourself in corrections?
I honestly had zero interest in corrections. I worked for the Ontario Public Service (OPS) Diversity Office as a program advisor with the Ministry of Government Services and had the opportunity to look at diversity across OPS. Part of that role was to brief my deputy minister prior to her meeting with other deputies. After developing a relationship with the deputy minister and assistant deputy minister for Corrections, I was asked by them if I’d ever considered a career in corrections. I was told it’d be a fairly easy transition because of my military background, though a number of challenges with the culture were pointed out.

So, in 2011, I started at OCI, job shadowing officers and managers, getting to know the people and various roles and shifts of this 24-hour treatment centre.

From there I was moved to the Toronto South Detention Centre, to assist with the opening for Phase 1, the Toronto Intermittent Centre. My primary responsibility was to ensure everyone was adequately trained. I learned a lot there from my superintendent, Jennifer Alphonso, and had many conversations with the vice-president of the union, who did a great job challenging the status quo. These relationships were important for me to better understand the corrections culture.

Q: What do you like most about the field?
Corrections is all about people… it’s about having an impact on the lives of individuals. If we demonstrate the behaviour that we expect from the inmate or residents, then we can initiate a change within them. We need to do that continuously… my grandmother, who was one of my biggest influences, used to say, “Practice makes perfect,” and the military teaches if we practice something often enough, you’ll just do it.

Q: How was working at the notorious “Don” Jail in Toronto?
There’s a phrase I learned at the Don — they said if you worked at the Don, you could work anywhere….

Every institution has a different culture and the culture there was different, yes, so it was important for me to get into the minds of those individuals who knew the Don, shadowing them.

Within a couple months of being at the Don, the organization’s structure was changed and I became deputy superintendent of operations. Regardless of my lack of experience, I had to deliver… I’ll tell you, my first three weeks as deputy of operations was more stressful than being on tour with the military.

Morning meetings were mandatory and I knew we had to make some changes, such as realizing we had to always be on top of our game. Some individuals were relaxed on the job; we had to emphasize we were responsible for the care, custody and control of the inmates.

I left the Don before it closed, after about a year and a half, and was transferred to Maplehurst Correctional Complex in Milton, as the deputy of operations. I then became the manager for Emergency Response Training at the Corrections College.

Q: What is your proudest moment in corrections so far?
I was on the subway one day going to a board meeting — I sit on a number of community boards. An individual came up to me and tapped me on the shoulder. He said, “You probably don’t remember me but I was at the Don when you were there.” He said he was out now, in a good relationship, had a new baby and was definitely not going back to jail. He asked about myself and I told him I was at the college at that time, training new correctional officers and he said, “Well, they’ve got the perfect person for the job because if the new officers can treat people the way you treated us, I think corrections will be a better place.” That in itself sums up what being a correctional professional is at the core.

Q: How do you see the culture changing?
Just coming full circle and returning to OCI was a huge change because here, it’s about treatment. Every resident here wants to be here; they go through rigorous application and further assessment upon arrival to OCI. So that in itself has been a change and it’s true, the culture of corrections is changing.

We’re moving to a case management system where the officers, psychologists, social workers and supervisors work with the residents so they can own what they did wrong and seek ways to improve by developing strategies to change the thinking behind the wrong behaviour.

OCI is the leader in case management for corrections. We will be able to assist other institutions in the transition as the new Correctional Services and Reintegration Act 2018 requires a focus on case management across the entire ministry. The current OCI model is being refined and introduces improved case management to further impact recidivism.

Q: How have you seen technology influence the industry?
Years ago, we would write things down. Now we have a desktop. Every institution has a body scanner… The previous technology (using metal detectors) wasn’t working as well due to the ability to smuggle in non-metal contraband.

As technology changes, we have to be in transition mode. We must motivate our team to want to use that technology. After all, it’s provided to make the environment safer.

At end of day, we want everyone to go home safe but the buy-in from the team is what we need — and for them to use new technology consistently.

Q: What is your hope for corrections?
I’m not sure what corrections will look like down the road but I’d like to see it get to the point where we have correctional professionals that are really proud of what they do. When you’re proud of what you do, it translates into everything else.

I think the industry needs to seek the answers in places where management and the union are working together, with a results focused approach. I hope people ask more things like, “How do we make this place work efficiently so when officers go home, they’re going home well, and residents go home better people — not adversely impacted by a negative corrections culture?”

We don’t communicate as well as we should… Let’s get back to the days where we can sit down and check in with each other on a regular basis, even if that’s just asking, “What’s going on?”

I want officers to know that as a supervisor I’m open to conversations and that the organization is supportive of them… Let’s look at the leadership approach versus the management approach. Managers make sure you abide by the policies and procedures. Managers do things right. Leaders do the right thing.

Q: What is your advice to others looking to become involved in corrections?
A correctional professional must be people focused. You must have a tough skin — the majority of inmates will follow directions but there will be a percentage that does not want to be here and they will give you a hard time. You have to understand it’s not because they hate you; it’s because they don’t want to be here and, for the most part, lacked structure growing up. It’s not about you.

Know yourself. It’s a great job, it pays well, but if you don’t fit the organization, you’re going to question each day, “Why am I here?” Once you start saying that, you’ll be dragging yourself in. When you stop enjoying the job, it becomes a long day. Make sure you choose this career because it’s something you want to do for a long time.