The executive board of FBI National Academy Associates (FBINAA) announced the appointment of Johnnie Adams, Chief of Police for the Santa Monica College Police Department during the annual training conference in Quebec City on July 24, 2018. Chief Adams succeeds now past president Scott Dumas, Chief of Police for the Rowley Police Department in Rowley, Mass. 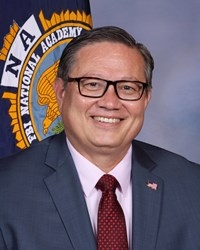 Adams currently oversees Santa Monica College’s campus safety, law enforcement, parking and emergency preparedness operations on its main campus at 1900 Pico Boulevard, as well as on its various satellite campuses throughout Santa Monica. Prior to his arrival at SMC, he was the deputy chief of operations at University of Southern California.

He began his career in 1983 at the University of California, Los Angeles (UCLA) as a student community service officer at the UCLA Police Department.

In the annual conference address, Adams stated, “Our profession is certainly facing many adversarial challenges both internally and externally. The tragedies that face agencies when one of their own commits suicide still plagues our profession as numerous studies around the country state that the incidence of suicides in law enforcement are higher statistically than that of the general population. The FBINAA is committed to reducing this through our partnership with Acadia Healthcare and the Officer Safety and Wellness Committee. I urge each member to take steps to help those in need.”

He also addressed the many challenges facing the law enforcement profession.

“Externally, we see the challenges of cyber-related crimes, human trafficking, global terrorism and mass shootings at our schools to name a few. The FBI National Academy Associates, through the strength of the network, will take on these challenges and help to drive solutions to keep our communities safe.”

The FBINAA stated it looks forward to the leadership of Chief Adams as the association celebrates its 25th year of incorporation.