Features
Implications of shooting through a windshield 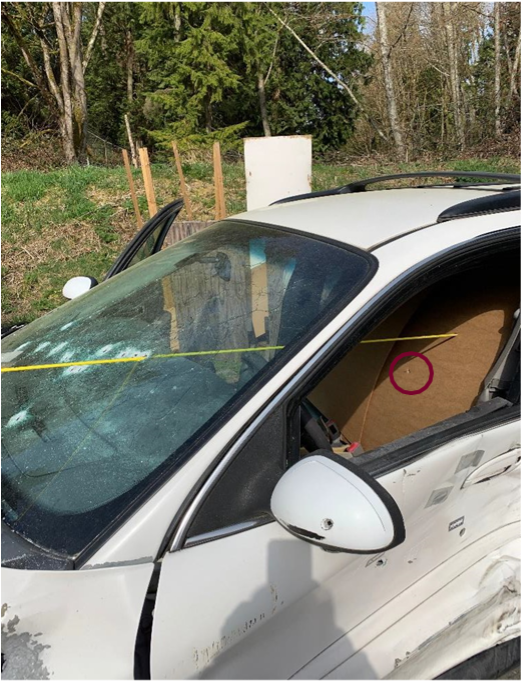 Bullet path and jacket fragmentation example. The point of impact of the separated jacket can be observed in the witness panel below and to the left of the main bullet core impact (in the circle). [Photo credit: Chris Butler]

By the very nature of police work, sometimes critical incidents occur in extremely short periods of time. Police officers can be confronted with potentially life-threatening dangers seemingly without warning and these threats can fully evolve within fractions of a second. These dangers can challenge police officers during all types of the work that they perform, and the research clearly shows that there is no duty that police officers engage in that is completely safe from the potential for a lethal confrontation.1

Several attacks on police officers, particularly those that would be categorized as ‘ambush’ attacks—those that occur extremely rapidly, without prior warning and minimal time to respond—are occurring with increasing frequency. The Law Enforcement Officers Killed and Assaulted (LEOKA) report for 2019 found that of the 48 officers feloniously killed, only 10 were able to draw their firearm and return fire; six officers attempted to draw their gun but were unsuccessful; and 32 (67 per cent) were unable to even attempt to draw their weapon.2 In several cases, officers were ambushed while still seated inside their vehicle, most typically while conducting traffic stops. A startling example of this type of attack took place in Surrey, B.C. in September 2021 when an officer was attempting a traffic stop. The offending driver in this case suddenly pointed a gun out the driver’s window and began firing at the lone RCMP officer.3

Research studies4 that have been conducted on various biomechanics of assaults inform us that the average offender can point a handgun and fire the first round in an average of 0.53 seconds (the fastest in the study was 0.23 seconds) while seated in the driver’s seat. An offender that suddenly exits the suspect vehicle after it is stopped is able to produce a handgun, point and fire it at the officer, in approximately 0.25 seconds.

Therefore, given these dramatically fast assault times, it is easy to see how an officer may be caught by surprise during an ambush attack while still seated in the police vehicle, and suddenly find themselves in a lethal force situation. This high-risk situation may evolve because of an offender who is either on foot outside of the police vehicle or from an offender who is occupying another vehicle in close proximity to the officer. Due to the speed with which such attacks can evolve, officers may find themselves seriously behind the action/reaction curve and are thus scrambling to respond as quickly as possible to manage the threat that has confronted them. In these situations, it may require officers to draw their firearm as quickly as possible and shoot from inside the police vehicle. When these shootings occur, officers will be typically forced to fire their initial shots through either the side windows or the windshield of the vehicle.

Another poignant example of how rapidly a life-threatening incident can evolve and force an officer’s need to respond by shooting through the windshield, was captured by the in-car dash camera of a police officer with the Solon (Ohio) police department on March 17, 2013. This incident began simply enough as a seemingly innocuous traffic stop. The offender subsequently pulled away from the police and a pursuit was initiated. At the conclusion of the pursuit, the primary police vehicle pulled up near the offender’s vehicle, at which point the offender rapidly exited his vehicle and began shooting at the officer. The officer drew his weapon while seated and returned fire through his windshield. The officer’s rounds successfully struck the offender and ended the threat.5

As a result of this potential threat, some police agencies have undertaken firearms training to address this risk by teaching their officers the important skill of being able to draw their sidearms while still seated in the police vehicle, and quickly returning fire through the windshield. Indeed, police firearms training has included the tactic of shooting through vehicle windshields (from both outside, shooting into the vehicle; and from inside shooting out of the vehicle) for many years.

This is certainly a necessary skill to have should the need arise to for an officer to save their life by shooting through the windshield. However, there remains many contrary opinions—even controversy within law enforcement—as to whether this can be done accurately due to concerns over changes to bullet trajectory as it passes through the windshield (either being fired from the inside or fired from the outside into the vehicle).

Vehicle windshield glass is a laminated system. It is comprised of a thin polyvinyl plastic layer that is sandwiched between two panels of glass. Some windshields may also have numerous layers of alternating plastic and glass panels.

As a result of the windshield construction, the laminated glass can have significant effects on the ballistic behaviour of bullets as they pass through. Two of the most common, and relevant, ballistic effects that officers need to be aware of are:

1. The tendency for the bullet jacket to separate from the lead bullet core

This occurs when the bullet passes through the windshield and the outer (usually copper) covering or ‘jacket’ of the bullet is torn off the main lead core to which it is bonded. The separation of the jacket results in ‘fragmentation’ which causes pieces of the bullet jacket to fracture into smaller pieces and travel in trajectories different than the main lead core projectile. Jacket separation is most common in hollow-point bullets, which are typically issued to law enforcement officers. After the bullet passes through the windshield, the trajectories of fragmented jacket pieces may be substantially dissimilar to the original line of flight of the main bullet and may or may not strike the intended target, and may be capable of causing serious injury or death. This is a potential risk that officers need to be aware of and factor into their risk assessment.

Image 1 demonstrates an example of bullet fragmentation. The flight path of the main bullet core is depicted by the trajectory rod, before and after passing through the windshield. Below the point of impact on the witness panel, a second impact point can be observed. This second impact point is the result of a piece of bullet jacket that has been torn off the main bullet as a result of passing through the windshield. 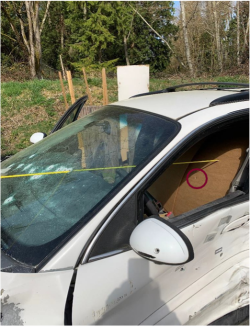 Bullet path and jacket fragmentation example. The point of impact of the separated jacket can be observed in the witness panel below and to the left of the main bullet core impact (in the circle). [Photo credit: Chris Butler]

2. A change in bullet trajectory 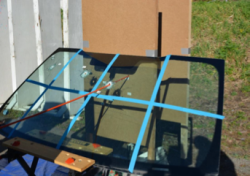 Leading forensic ballistic instructor Gary Graff provided the author with a spreadsheet in which he documented windshield deflection angles for handgun rounds on twenty-two shooting incident reconstruction courses conducted across North America. In analyzing the spreadsheet, the average deflection angle of handgun bullets fired through windshields is 2.3 degrees downward (fired from outside to inside; range zero to six degrees).

At a firing distance of five metres, from windshield to intended target, with an average deflection angle of 2.3 degrees, a semi-automatic handgun bullet may be expected to deflect approximately 20 centimetres (upward, if fired from inside the vehicle).

In the final consideration, shooting through a police vehicle windshield is an important and necessary survival skill. Officers must always be mindful of the critical need to ensure they have ‘target isolation’ and are confident that they can hit what they are intending to shoot.

Chris Butler is a certified firearms instructor and has conducted basic and advanced firearms training to police officers during the course of his career. This training includes tactics that are typically referred to as ‘close quarter battle’ with firearms, a component of which includes shooting into vehicles and shooting from the inside of vehicles. In addition, he has been certified as a shooting scene incident reconstructionist and has conducted live fire ballistic examinations and reconstructions of shooting scenes including the firing of bullets through windshield glass in a variety of configurations. Chris can be reached at chris@raptorprotection.com