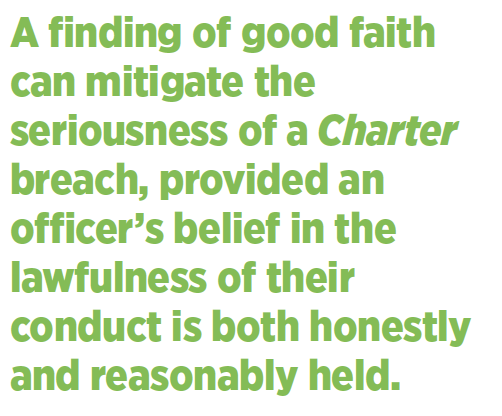 It was an error for a trial judge to conclude that an officer acted in “good faith” when his subjective belief in exigent circumstances to conduct a warrantless entry into a dwelling was not objectively reasonable. In R. v. Pawar, 2020 BCCA 251 the police received a tip from a confidential informer that someone matching the accused’s description was trafficking in cocaine and heroin. The police surveilled Pawar and observed transactions and behaviours believed to be consistent with a dial‑a‑dope operation. When police saw a woman speaking to Pawar through the passenger-side window of his car in a bank parking lot, run over to and access an ATM, and then return to Pawar’s vehicle, police arrested Pawar and the woman. On a search incidental to arrest, a small quantity of cocaine was found on Pawar and his cellphone was also seized.

Following the arrests — but before the police applied for a warrant to search Pawar’s home, a location they knew he shared with his parents and brother — the police attended at the residence. The officer‑in‑charge of the investigation, relying on s. 11(7) of the Controlled Drugs and Substances Act (exigent circumstances), authorized entry into the residence because he feared evidence could be destroyed or moved before the search warrant was obtained. The officer‑in‑charge believed that exigent circumstances justified the warrantless entry because:

Police knocked on the door and Pawar’s mother answered. She was instructed to leave the residence, along with the brother, until a warrant was obtained and executed. Police entered the residence and cleared it, taking about eight minutes to do so. Police then left the residence and waited outside until the search warrant arrived. When the police executed the warrant, they found a substantial amount of drugs street valued at $120,000.

At trial in the B.C. Supreme Court the judge concluded that the officer‑in‑charge subjectively believed exigent circumstances justified the warrantless entry on the basis of a need to preserve the evidence. However, the judge found the officer’s subjective belief was not objectively reasonable. Thus, there were no exigent circumstances to justify the conduct of the police. The warrantless entry of the dwelling‑house infringed Pawar’s rights under s. 8 of the Charter.

However, the judge admitted the evidence under s. 24(2). Among other things, she found the officer-in-charge acted in good faith by relying on the doctrine of exigent circumstances, which mitigated the seriousness of the Charter breach. In her view, the officer had “a reasonable concern that evidence might be moved or destroyed” and “he honestly believed that he was acting lawfully in directing officers to enter the residence.” Taking steps to remove Pawar’s mother and brother from the residence was not unreasonable. Pawar was convicted of four counts of possessing a controlled substance — cocaine, MDMA, psilocybin and marijuana — for the purpose of trafficking.

Pawar appealed to B.C.’s highest court, arguing the evidence ought to have been excluded. He asserted, among other things, that the officer-in-charge did not act in good faith and therefore the trial judge’s assessment of the seriousness of the Charter breach was flawed. The Court of Appeal agreed.

A finding of good faith can mitigate the seriousness of a Charter breach, provided an officer’s belief in the lawfulness of their conduct is both honestly and reasonably held.

Justice Fitch, speaking for the unanimous appeal court, noted the trial judge ruled that the officer’s belief in exigent circumstances was not reasonably held. This finding precluded a conclusion that the officer was acting in good faith. Fitch stated:

Theoretically speaking, there will always be a risk when the police make a public arrest in a case of this kind that drugs being kept by the arrestee at a “stash house” may be moved or destroyed. There is nothing about this case that raised this risk from the general to the particular. If exigent circumstances existed in this case, they would exist in every case of this kind and warrantless entries into private dwelling‑houses to preserve the scene would become the rule, not the exception. [paras. 65-66]

Fitch concluded that the officer “was not operating in unknown legal territory” and the rules were well established.

“There is a long line of judgments from the Supreme Court of Canada considering the circumstances in which exigent circumstances may justify the warrantless entry of a private dwelling‑house,” he said. “To justify such an entry, the Crown must show some case‑specific urgency in the pursuit of an investigative imperative—in this case the preservation of evidence—and a serious risk that waiting for a warrant would frustrate achievement of that imperative.” Here, the officer’s concern was general, speculative, and vague. There was nothing specific to this investigation to objectively support the officer’s subjective belief that delay would give rise to a serious risk evidence would be lost.

“On the state of law that existed at the time of the warrantless entry, the police ought to have known they could not rely on vague and speculative concerns about the preservation of evidence to enter a private dwelling‑house without a warrant,” Fitch said. “They ought to have known that the investigative information available to them did not justify the warrantless entry of residential premises.”

After a s. 24(2) analysis re-do, the Court of Appeal concluded the admission of the evidence would bring the administration of justice into disrepute. The very serious Charter breach and its serious impact on Pawar’s Charter-protected interests strongly favoured exclusion, which was not outweighed by the reliability of the evidence and its importance to the Crown’s case. Pawar’s convictions were quashed and acquittals were entered on all charges.