The Minister of Public Safety and Emergency Preparedness, Ralph Goodale, and the Minister of Health, Ginette Petitpas Taylor, have announced the release of Supporting Canada’s Public Safety Personnel: An Action Plan on Post-Traumatic Stress Injuries. 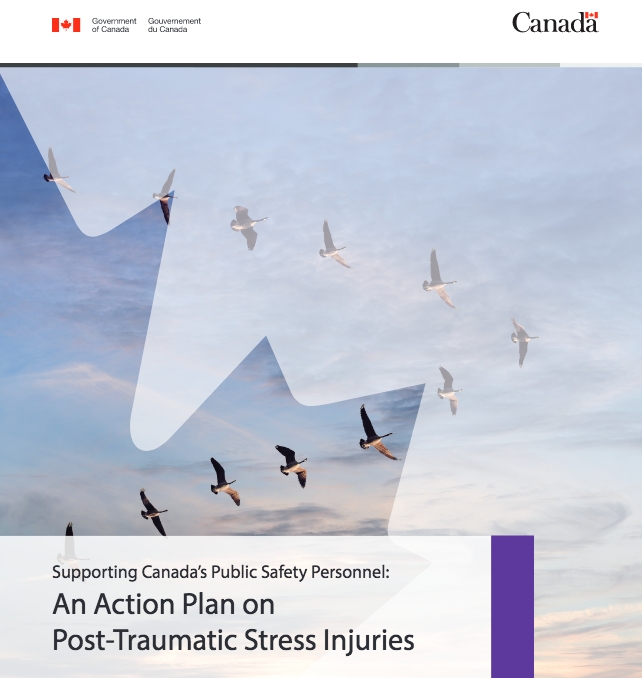 The Action Plan was developed based on consultations with public safety organizations, other levels of government, academia, union representatives, mental health professionals and non-governmental organizations. The plan will “support research, prevention, early intervention, stigma-reduction, care and treatment for all types of public safety personnel, all across the country.”

Public safety personnel is a term that broadly encompasses front-line personnel who ensure the safety and security of Canadians across all jurisdictions. Examples can include: Tri-Services (police – including the Royal Canadian Mounted Police, firefighters, and paramedics), correctional employees, border services personnel, operational and intelligence personnel, search and rescue personnel, Indigenous emergency managers, and dispatch personnel.

“In addition to the general workplace stressors that affect everyone, police personnel are exposed to a unique and difficult set of job-related hazards. It is essential to change how we think, prevent, treat and respond to mental health and wellness concerns within policing and the broader first responder community,” said Chief Const. Adam Palmer, president of the Canadian Association of Chiefs of Police (CACP). “The mental health and safety of police personnel and other first responders has long been a priority for the Canadian Association of Chiefs of Police. The CACP commends the federal government for acknowledging the risk and potentially devastating impacts of PTSI on first responders, and for articulating an action plan to address the issues. We are grateful to have had the opportunity to participate in the consultation process and look forward to working with the government to facilitate implementation and begin to put these plans into action.”

The Government of Canada says it is investing $20 million over five years to support a new National Research Consortium on PTSI among public safety personnel between the Canadian Institutes of Health Research (CIHR) and the Canadian Institute for Public Safety Research and Treatment (CIPSRT) of which $11 million in grant funding has already been announced.

The Government is also investing $10 million over five years, starting in 2018-19, for an Internet-based Cognitive Behavioural Therapy pilot to provide greater access to care and treatment for public safety personnel, especially in rural and remote areas.

Another $10 million is to go toward a longitudinal study of the mental health of RCMP new recruits. This study will help develop appropriate mental wellness and remedial strategies for the force and other emergency response organizations, the feds announced.

Public Safety Canada launched the Memorial Grant Program in 2018, which recognizes the service and sacrifice of first responders who have died as a direct result of carrying out their duties, including death resulting from an operational stress injury. After a delay, it is now fully up and running, and formally accepting applications.

“There’s no doubt front-line police personnel are disproportionately affected by mental health challenges, not just as a result of the work they do, but also from the stress and anxiety caused by significant organizational issues, including staffing and lack of resources, which have a long-term impact,” said Tom Stamatakis, Canadian Police Association. “Police associations have been successful in securing presumptive legislation, and bargaining increased mental health benefits into collective agreements, but having the federal government play a leadership role will help co-ordinate these efforts and ensure that the health and well-being of our members is front and centre.”