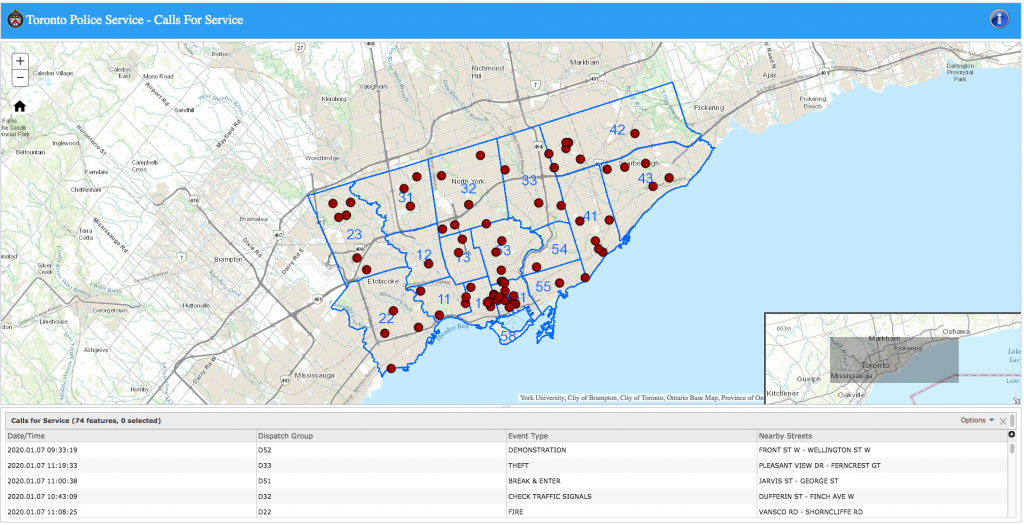 Ian Williams is the head of analytics and innovation at the Toronto Police Service and a course instructor at Ryerson University, where he teaches GIS and analytics. He says for public safety organizations, the goal is to take the information presented by these systems and analyze it so that patterns can be identified and actions can be taken.

An example of this is resource allocation: “If there’s a higher prevalence of robberies in certain parts of the city, we would strategically deploy around that.” Williams continues, “If there’s something occurring, where’s my closest unit, or units, and what’s going to happen if we assign multiple units? Is that going to impact service availability elsewhere?”

Jeff Hughes is the district manager, defence and security, for Esri Canada, part of a global GIS software giant. He says GIS data can help prioritize security workflow and responses.

“Data can be geofenced to provide the ability to assign or reassign work, based on location…. We know that we need to visit 50 locations; let’s prioritize, based on spatial information, which locations we’re going to secure or inspect first.”

Williams says GIS are valuable tools for searches, like manhunts or for missing persons. “We can co-ordinate that search area from a command centre, we can deploy resources while they’re on the ground and completing search grids. They can actually check off ‘I’ve been to all the houses in this search grid, that’s detailed, audited, logged,’ so in real-time the operations centre can co-ordinate which spaces still need to be searched.”

In addition to GIS being used as public safety tools, public and private organizations can turn to GIS to protect their assets.

Hughes says that regardless of the application or industry, “it’s understanding your assets, whether those are physical assets, mobile assets or personnel. Having situational awareness of those dynamic assets and static assets really helps not only in tactical security situations but also in strategic and risk analysis or risk assessment of your operations.”

Williams says that for security applications, a lot of tools, widgets and apps are being designed around GIS engines:

“A lot of them have an interesting workflow integration. So, you could use one of them to manage incidents, but you could also connect that into a planning module and they’re all technically distinct applications but they work together… So the data produced in one to track your incidents or requests for service, you can move that into a planning tool that helps you understand what those needs will be for tomorrow or next week or this time next year.”

Delivery through the cloud

When it comes to how these systems are delivered, Williams says that currently, on-premises installations are more popular, but there is a move towards software-as-a-service (SaaS) models, and in some cases, organizations are opting for a hybrid approach, especially municipalities. “Most municipalities that have GIS technology, they’re going to be on-prem.” But, “often what they’ll do is serve up content to the public or other users through web interfaces, a variety of application formats.” However, moving forward, “I’d expect a lot more of that to be software-as-a-service-based, the implementations being either completely cloud or hybrid… I think a lot of organizations will be hybrid for some time and then it will be organization-specific to determine if it’s pure cloud or not.”

Williams says that for the Toronto Police Service, “all of our public-facing content is cloud-based, and the applications are all SaaS from what the public has access to in that regard. But we have almost an identical (on-prem) platform internally as well… So, we’ll be hybrid for some time I would imagine.”

Hughes says software-as-a-service is “really accessible,” and “it has a low bar of entry for lots of organizations,” especially ones that traditionally haven’t invested in GIS.

“Software-as-a-service really opens up opportunities for municipalities and individual organizations, to not only get access to managing geospatial data in the cloud but also to collaborate amongst themselves or between private and public agencies,” he continues.

Hughes also explains that data like that obtained from sensors and alarms, “often necessitates the hybrid or fully online capability to move data around between devices and across networks.”
Whether organizations opt for on-premise, cloud or hybrid GIS platforms, what isn’t up for debate is that they are becoming increasingly essential to public safety and risk management.

Williams says, “Our frontline people expect that there’s apps in their hand that are giving them access to all of this information, and equally at the senior levels of the organization, they expect those apps to be available to their people but also to themselves. It’s really crossing that tactical-strategic line…. It’s only going to grow from here.”

This story appeared in the January/February 2020 edition of SP&T News. Find it here: www.sptnews.ca/digital.