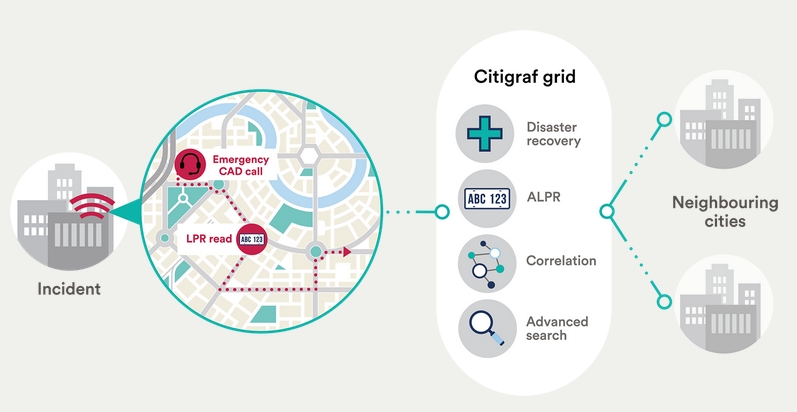 Citigraf features a correlation and analytics engine that detects and displays  information from disparate systems for inter-agency collaboration.

With an interface built on Genetec Security Center, Citigraf collects and manages information provided by integrated CAD (Computer Aided Dispatch) systems, CCTV footage, ALPR data, RMS (Record Management Systems) and more, to immediately identify and display the exact location of an event using icons on a map from a built-in geographical information system (GIS). Thanks to a collaborative integration with gunshot detection technology, response teams can be notified with a gun icon, a map location and nearby cameras when a gunshot has been detected.

“Just under a year ago, the Chicago Police department turned to Genetec to help create a response and decision support system that would combine our computer assisted dispatch (CAD), 911 calls from residents, gunshot detection sensors, and other disparate systems to reduce the response time for reported shootings and crime in six police districts,” said Jonathan Lewin, Chief of Technical Services for the Chicago Police Department. “While we expected this project to take many months to develop, the engineering team at Genetec delivered a technology prototype in less than a month. Since rolling out Genetec Citigraf, response times from dispatch to ‘on-scene’ arrival time, have been reduced by 39 per cent and 24 per cent respectively, in our two most at-risk districts. Shootings are down 22 per cent in these districts compared to 2016, and the technology and process will be expanding to more districts. Citigraf is now deployed in our Strategic Decision Support Centers, located in each corresponding police district facilities, and has helped us send a strong message to the community that crime and gun violence get a swift response.”

Citigraf also offers agencies a new way of measuring, reporting, and determining the impact of new initiatives and interventions, Genetec states. Analytical dashboards, heat maps, and data analysis provide insights into how crime and events move and change throughout a city, over time. The collective, data-driven analytics in Citigraf give police departments indicators for potential threats within the city’s next operations cycle, Genetec says, helping law enforcement define and modify patrol beats and staffing requirements.

Citigraf is expected to be available in late October 2017, according to the company, and will be demonstrated at the IACP Conference in Philadelphia, Pa. from Oct.21-24.