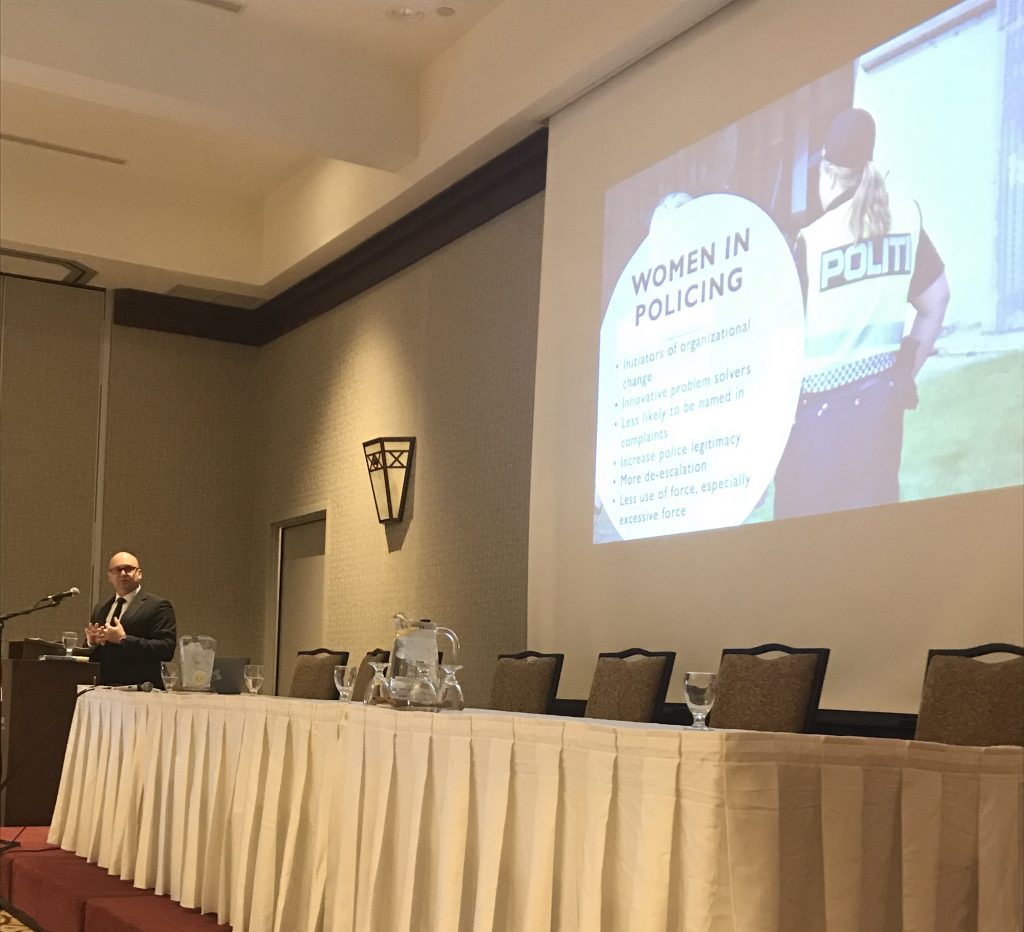 Back in 2014, Alanna Evans with Canada’s fashion magazine, Flare, chronicled her experience training for Ontario’s Physical Readiness Evaluation for Police, or the PREP.

“I was foiled by the grip test, despite having trained for it, simply because my hands weren’t big enough to wrap around the handles and engage the mechanism,” she wrote. “I flunked the practice PREP solely because of the grip test.”

Sgt. David Jones with the Edmonton Police Service referenced Evans’ account during his presentation earlier this year at the Advancing WE in Policing Workshop in Niagara Falls. Jones, who recently earned his master’s degree in applied criminology and police management at the University of Cambridge, summarized his thesis research on police hiring and gender-related barriers.

“The performance of men in policing has just been held as a standard and has never been challenged…” Jones said during the workshop.

Advancing WE in Policing, described as a “collective voice on equity, inclusion and diversity in Ontario policing,” was established in November 2017, and was formerly known as Advancing Women in Policing. It’s a group of executive men and women in policing with the intention to “generate a dialogue for innovative, practical and sustainable solutions for equity and inclusion as it relates to gender through investigation, exploration, learning, consulting and measuring.” ​​

The workshop was one of the last law enforcement events I attended before COVID-19 swept in with full force and it crossed my mind again recently as I’ve been reflecting on those carefree moments when I once shook others’ hands and dined buffet-style.

“We need to assess different ways of recruiting women… I would suggest we have a false sense of security in our physical testing.” – Sgt. David Jones

Jones completely captured my attention as he shared his research, which found the physical testing component of the recruiting process eliminated five times as many women as men.

“Do we really want to wait for a court ruling before we change our system?” he asked the workshop attendees. “We’re facing that right now with street checks in Ontario. That’s not the best way to go about this. We need to assess different ways of recruiting women… I would suggest we have a false sense of security in our physical testing.”

Jones acknowledged decisions can’t be made in a vacuum, but pointed to how the data can open the door to many more valuable questions.

“What would we do with the applicant who went around the fence instead of over it?” he queried. “That’s problem solving and that — along with good tactics and planning ahead — are what I encountered on the frontline.”

I also listened in on a TED Talk recorded in Vancouver last year, featuring police Captain Ivonne Roman, a PhD student at Rutgers-Camden, who founded the Women’s Leadership Academy to increase the retention of women in policing.

She provided an American perspective on the same topic and talked about monitoring New Jersey recruits in 2014 as they cycled through police academies; she found women failing at high rates due to varying aspects of the fitness exam.

“There are vast advantages to women in policing and we’re losing them to arbitrary fitness standards,” she said, noting the U.S. has nearly 18,000 police agencies with widely varying fitness standards. “We have training that does not mirror the realities of policing… Physical agility is but a small component…. Much of an officer’s day is spent mediating interpersonal conflicts. That’s the reality.”

According to Roman, “simply changing the exams” and training well-qualified candidates to pass “validated, work-related, physiologically-based fitness exams as required” will increase the number of women in policing, an advantage to everyone given “their proven effectiveness in diffusing violent situations and reducing the use of force.”

Dan Paling, a municipal police officer and digital forensics analyst in Michigan, commented on one of my LinkedIn posts about Jones’ presentation that the Michigan Commission on Law Enforcement Standards (MCOLES) “dialled back” its fitness testing “years ago” and, according to Paling, “it seems to be working well.”

Related
Seeing is believing
Quartermaster section is no longer a boys’ club in Ottawa
Advancing WE in Policing workshop opens up the inclusivity conversation
Vancouver’s Women in Blue by Carolyn J. Daley