FREDERICTON — Police officers in Fredericton have collected the flowers and notes left in a makeshift memorial outside the police station Sunday morning, marking another step as the New Brunswick capital continues to grieve the loss of four of its residents. 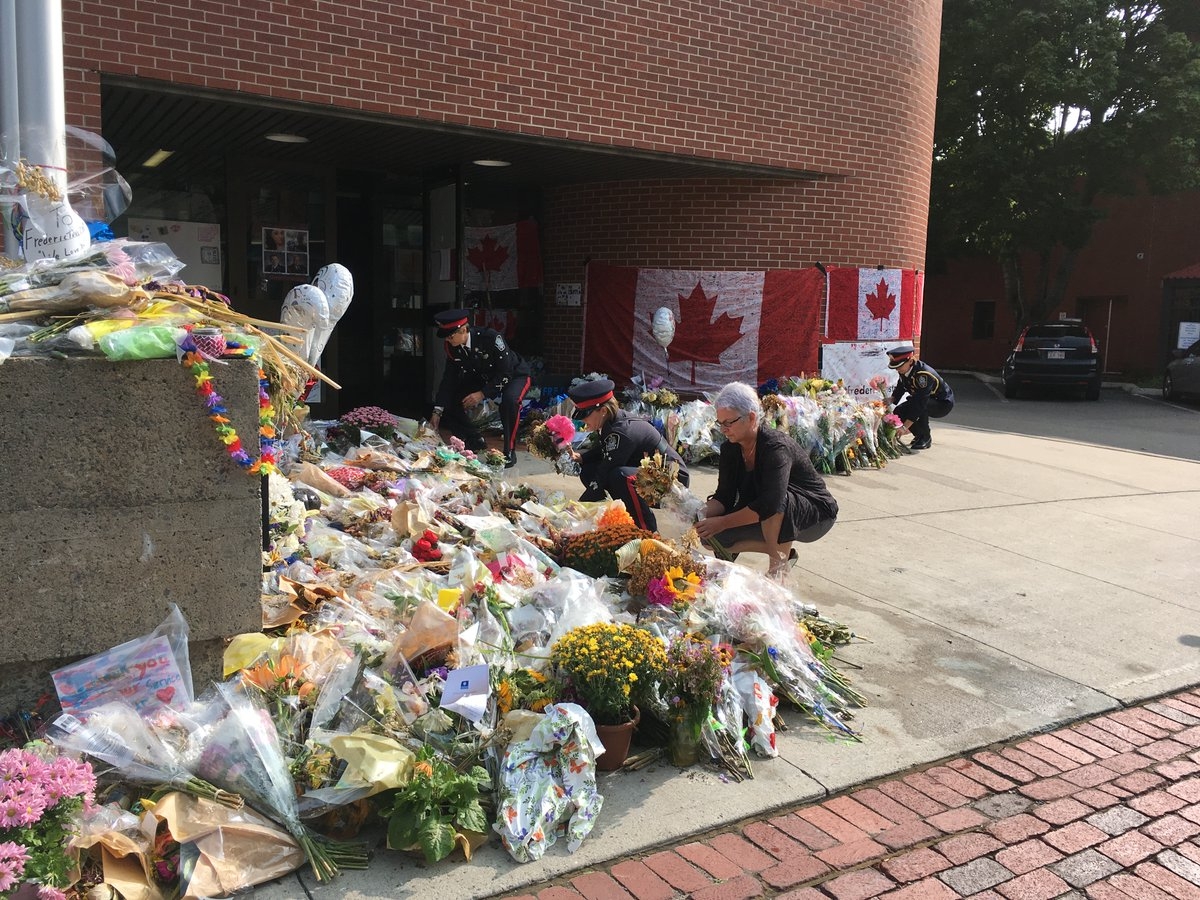 The memorial sprung up after a gunman opened fire on the parking lot of an apartment complex on Aug. 10, striking down Constables Sara Burns and Robb Costello, along with civilians Donnie Robichaud and Bobbie Lee Wright.

Mourners flocked to the police station to pay their respects, leaving cards, signs and stuffed animals in a tribute to the small police force still grappling with the death of two of their own.

“Thank you Fredericton! Your outpouring of support has been overwhelming,” the agency tweeted Sunday morning.

The Fredericton Police Force said it will share the messages among its employees and the families of Costello and Burns.

The deluge of sympathy has been noted by Jackie McLean, Costello’s partner, who has been documenting her mourning process through her Twitter account.

“I’ve had all of you holding me up and squeezing me back together this past week,” McLean tweeted Sunday.

“I’m going to need you to keep doing it.”

The move to collect the cards and flowers comes a day after the regimental funeral for Costello and Burns, attended by more than a thousand officers and first responders from across the continent.

At the beginning of the ceremony, officers laid the caps and belts of the fallen constables on top of their caskets, which were covered by Canadian flags, next to the roses placed there by family members.

The flags were later carefully folded and given to Costello and Burns’s families with their police hats.

“As long as I live, I will never forget the feel of that flag, pillow and hat being place in my hands,” tweeted McLean a couple hours after the ceremony.

“I arrived home to think ‘now what do I do with this?’ Nothing seems substantial enough.”

Several hours later, she wrote: “Robb excelled at bringing people together and tonight’s celebration of his life was no exception.”

During Saturday’s funeral, Burns’s husband fought back tears as he delivered a powerful speech in which he asked the surviving Fredericton officers not to feel any guilt about his wife’s death.

“I want each and every one of you to know that she is at peace, and knows that you did everything you could to protect her,” he said.

In a statement last week, police asked that the public not speculate about the case or the alleged shooter’s motives.

On Friday, a judge lifted a publication ban that had been imposed on court documents revealing details about how the deadly attack unfolded.

Monday’s ban came hours after several media outlets had already reported on what the documents contained.

The now public documents say the accused gunman was wounded as he allegedly exchanged gunfire with another officer from his apartment window.

— By Alex Cooke in Halifax