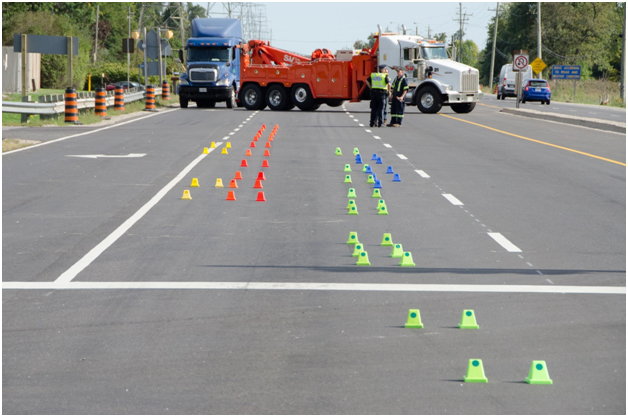 Members of the Ontario Provincial Police (OPP) travel countless kilometres, every day, across roads and highways that bend and wind through the small towns and cities dotting the province.

During the course of those long patrols, one of the most difficult calls for service is responding to a fatal car accident. Arriving on scene as a first responder can sometimes be chaotic, where minutes count; the goal is to save lives and prevent further loss.

Understanding how the accident happened is equally important, which is critical to both identifying elements of the crash that are avoidable, but also to providing an accurate accountability for court testimony.

By 1992, OPP Const. Brian McLaughlin had already dealt with multiple car accidents on the roads he patrolled near Orillia, Ont. He had noticed that for non-fatal collisions, vehicles were often quickly examined then released. There was no process for fully evaluating the state of the vehicle, no proof that the car was still safe to drive.

As a result, a lot of defence cases would rely on that lack of verification and point to a vehicle defect as the reason for the collision.
“Police had nothing to counter this and people would get off,” McLaughlin said. “In the early 1990s there were no provincial standards set for examining a vehicle at a collision.”

It got him thinking. With his background as a mechanic, he started to formulate a set of best practices that could be used to fully and scientifically evaluate the state of a vehicle at a collision: Forensic mechanics.

“We all went through mechanic’s school and were taught if it was broken, how do you repair it?” McLaughlin explained. “Forensic mechanics looks at trying to figure out why it broke in the first place.”

McLaughlin’s Forensic Mechanics program is still relatively new, but it is gaining the attention of other police services. With the help of Sgt. Mark Wright, provincial co-ordinator for the OPP’s Technical Collision and Reconstruction Program, it has become standard practice for processing any collision scene for the OPP.

It uses a series of established procedures that scientifically evaluate the condition of a vehicle after a collision. The program trains sworn officers in the principles of forensics, but with the lens of a mechanic. Coupled with a robust reconstruction process, it benefits from the unique perspective and training of a sworn officer, with a critical eye to court testimony.

“We’re not just looking at whether a car would pass safety standards,” said Wright. “We’re looking specifically for the cause of the crash.”

Police services across the country have relied on third-party mechanics to assess vehicles after a collision. While these external mechanics are certified and competent to follow a standard checklist, they typically do not have any formal police training, which can be important for court processes.

“We’ve always used sworn officers at the OPP (for collision investigations),” Wright said. “Our mechanics are technical mechanics, or reconstructionists. They understand how to give testimony.”

Most recently, the Ottawa Police Service (OPS) signed up five of its sworn members for training with Wright.

“The form we used before was more of a checklist,” said OPS Collision Investigator Sgt. Cameron Graham. “We had a couple of high-profile collisions where we had OPP mechanics trained in forensic mechanics assist and we realized that their process was much more detailed.”

More details in the investigation process provides a more reliable foundation for testimony in court. By providing an extensive and scientific analysis of both the collision scene and the vehicles involved, it can create a solid case that is rooted in indisputable facts. The 16-page commercial vehicle inspection field notes checklist, for example, includes specific details about trailers, wheels, load and even tire pressure. Separate forensic investigation forms for motorcycles, boats and ATVs also include a series of checklists to fully document all details of an involved vehicle.

“We know that it will be the same quality of examination across the board,” explained Wright about the Forensic Mechanics program’s standards and processes. “We have introduced more focused training so that our officers know what to look for to identify issues.”
“It’s great because we know that our officers will carry out a thorough investigation,” McLaughlin added. “You don’t want to see a family devastated by a collision, and not be able to prove what happened.”

In a typical year, OPP officers respond to about 700 collisions on Ontario’s roads and highways. By having a standard set of processes, there is a consistency in approach that will ensure that each investigation will yield reliable data.

And the program, while growing, still has a few issues to overcome.

“It can be hard to find sworn officers who are dedicated mechanics, and some don’t want to spend their career pulling wrenches and working on greasy cars,” McLaughlin noted. “We try to engage them through the collision reconstruction program and show them they can use those skills as part of an investigation.”

Wright agreed, saying it can be hard to identify the right people and “get them the technical training they need.” But word-of-mouth on how well the program is doing, and how it’s helping cases, has encouraged engagement, he said.

Graham has been impressed with the training and said OPS officers are now using it to process incidents. And he’s already noticed a big difference in the quality of the work the collision investigations team is providing.

“We are producing a much better report and our officers are now better prepared to testify in court,” Graham said.

“We are hoping this new education and the documents we are providing will become established as standard, and the court system will be happy with our investigations into motor vehicle accidents,” said Graham.

The program goes beyond just police investigations. A partnership with Transport Canada allows OPP and OPS to share some of the data they collect to help in defect analysis for vehicles. That data further increases road safety nation-wide as problem vehicles are flagged and identified for recall.

If you are interested in learning more about the Forensic Mechanics program, email: Mark.D.Wright@opp.ca.

Peggy Staruch is a corporate communications specialist for the Ottawa Police Service.