Sig Sauer has suspended production of the Sig P320 pistol and its North American distributor has issued what they call a “voluntary upgrade” program. 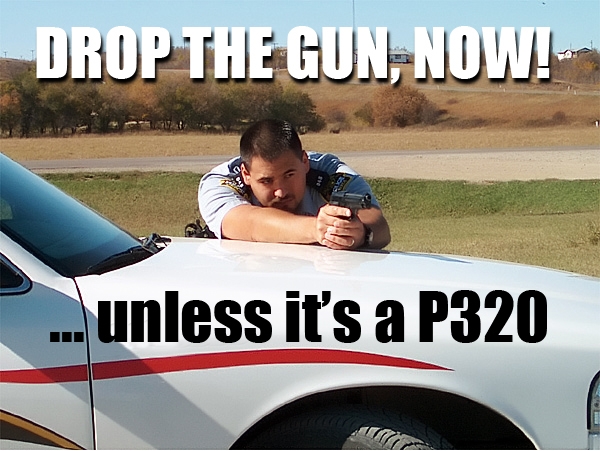 When dropped at an angle that allows the pistol to strike a hard surface such as concrete on the rear of the slide at a 30-degree angle to the bore axis, the pistol may discharge. While reported incidents are rare, several online websites have been able to easily recreate the situation that would cause the pistol to discharge if dropped.

One Connecticut police officer was shot in the leg when his P320 accidentally hit the ground and subsequently fired, and U.S. agencies such as Dallas Police have now officially issued a recall of all P320 pistols. Other agencies such as North Dakota Highway Patrol and Santa Barbara Police have removed the P320 from their approved pistol list.

I recommend all owners and agencies immediately suspend the use of all P320 pistols until they can be sent back to the factory.
The voluntary upgrade program affects all law enforcement and civilian-owned Sig P320 pistols, but does not affect the first batch of M17 pistols delivered to the U.S. military after Sig Sauer recently won the competition for the U.S. military Modular Handgun System (MHS) over Glock in early 2017.

In spite of the fact that Sig was able to reproduce the situation that causes the pistols to fire on their own when dropped and has started manufacturing an “enhanced trigger” system, they refuse to call this a “recall.” Sig maintains the P320 met all the safety standards in place at the time of manufacture and the CEO has stated that “no pistol is totally drop-safe.” Sig recommends users always carry the pistol with an empty chamber. (Obviously, they have not seen the videos of Glocks dropped from helicopters.)

I had an opportunity to handle a P320 pistol and to study the drop test videos which support the fact that the pistol will likely fire on its own if dropped from about one metre onto concrete, landing directly onto the back of its slide. The videos clearly showed how the trigger moves to the rear when dropped.

The P320, unlike the Glock or S&W M&P, has no trigger safety. Slow-motion video from Sig’s own tests show how the upgraded parts lighten the overall weight of the trigger components and prevent the trigger from moving enough to the rear to discharge, but they still show the trigger moving.

During the U.S. Military XM17 pistol trials, Sig touted one of the advantages of the P320 over the Glock was that the user didn’t need to pull the trigger to field-strip the pistol. Ultimately, however, the final M17 pistol selection simply came down to the lowest bidder. The P320’s skeleton frame with a polymer skin is cheaper to manufacture than the Glock entry with full polymer frame and imbedded hardened steel slide rails. Glock’s bid came in at slightly more than $100 million higher, on a possible total program cost of $580 million.

Glock has been quietly working on a new design that employs a rotating bolt barrel-lockup system for a European client that does not require pulling the trigger to disassemble the pistol, but with Glock holding almost 65 per cent of the police market in the U.S. (and possibly even higher than that in Canada) one wonders if this was ever a serious problem in law enforcement. Trying to solve training issues with technical solutions often have unexpected consequences, and field-stripping a loaded pistol for cleaning always made about as much sense as trying to change the oil on your police car while driving down the street.

There are approximately 500,000 SIG P320 pistols out there, not including the approximately 200,000 pistols that will be issued to the various branches of the U.S. military over the next few years. Sending each one back to the factory for a “voluntary upgrade” to prevent them firing on their own is a huge undertaking for Sig. Other makes of pistols have been upgraded or recalled over the years, but nothing of this calibre, so to speak.

Quite frankly, I think in an effort to be “not-a-Glock,” Sig has figuratively — and perhaps almost literally — shot themselves in the foot with this one.

Dave Brown is Blue Line’s firearms and police vehicle contributor. He is a tactical firearms trainer and consultant based in Winnipeg, Man. He can be reached at davebrown@blueline.ca.
Print this page

Related
Duty firearms 2018 – New trends in police and law enforcement guns and ammo
Moving to the ‘next generation’ handgun
No sonic guns for the near future
Should police sell guns? Some chiefs say no