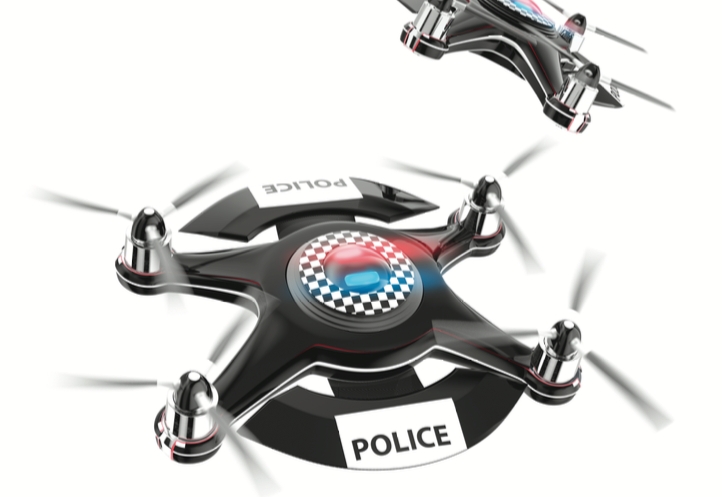 An unmarked panel van crashes through the “No Vehicles” barrier around the market square. It rams a stall, hits several shoppers and suddenly stops. Three men dismount, yelling and brandishing machetes.

They begin randomly assaulting everybody in the immediate vicinity. Two unarmed police officers are patrolling on foot close by. Mass panic ensues as frightened bystanders fight to get away.

The police activate their “personal location major incident transponders” and rush to try to contain the threat. A direct machete blow immediately incapacitates one officer and the second fights for his life against two of the attackers. Several unarmed bystanders intervene and the attackers withdraw into the crowd, inflicting further random casualties.

Within two minutes of the police transponder activation, a formation of five Remotely Piloted Vehicles (RPVs or drones) arrive overhead the injured police officers. The two larger RPVs begin to orbit the area 15 metres above the scene, while the three smaller RPVs sweep the market square. One RPV suddenly hovers and fires a small projectile into an attacker. The two RPVs begin a tight three metre orbit over a struggling group. Two more projectiles are fired, followed immediately by two larger projectiles. The larger projectiles blossom into fine mesh circular nets over two of the attackers, who are staggering around as though drunk. The nets completely envelope the men and stick to them. These attackers fall to the ground and lie quietly. The three smaller RPVs resume their search patterns.

As the RPVs orbit the market, multiple police vehicles arrive, led by an armed police rapid response team. Police incident response processes begin to take effect and the masked men are disarmed and secured in police vehicles. Paramedics and other first responders begin to attend to the injured and disoriented members of the public. An incident command post is established and post incident investigation and follow-up commences.

The problem
This scenario is an example of a multi-layered problem. There are many factors and consequences involved requiring extensive concurrent analysis, decision and action. The complexity and speed of events is frequently overwhelming, confused with significant risk of loss of incident control.

Urban terrorism is a difficult and complex challenge. These simple but lethally effective attacks usually occur without warning. Random terrorism acts are difficult to predict and there is high risk of bystander casualties.

The shortest and most effective response time is vital to minimize casualties or property damage. In this scenario, an automatic personal transponder in the police officer’s communications pack commands the RPVs to depart their base, transit by the shortest aerial route to the transponder location and commence a search pattern overhead the scene. Simultaneously, the RPV command team and pilots engage their control consoles and commence visual search and target acquisition. The RPVs are then controlled directly by the duty senior watch commander from a remote- control centre. Designated police response also commences zeroing in on the transponder location. The armed response team is briefed by the watch commander thanks to a live video link while travelling to the scene. Maximum effective response is immediately underway with maximum concurrent effort.

Attacks in England over the last couple of years have demonstrated the effective London Metropolitan Police (LMP) rapid reaction, including “contained” lethal force against adversaries armed with a vehicle and concealed edged weapons in a crowd situation.

Once the decision was made to commit armed response during the London Bridge attack in June 2017, the LMP counter-terrorist team took just eight minutes in high-density city traffic and crowds to corner and defeat the attackers. There was one civilian bystander non-lethal casualty, while expending about fifty small arms rounds.

This is a testament to the LMP’s professionalism, dedication and training. It is unlikely that any other police rapid response team could better this standard in similar conditions and stress levels. Only unobstructed RPV aerial response will improve this standard.

A major factor in terror attacks is the low level of sophistication employed by the terrorist to achieve public terror. Military or improvised complex weaponry is rarely used, as they are difficult to get, make and/or keep secret.

A solution
Crowded urban environment acts of terror most frequently occur in just two dimensions: on the ground. There is an opportunity for a three-dimensional police interdiction. The evolution of small- or medium-size RPVs, which are increasingly inexpensive and sophisticated, now allows real-time intelligence, reconnaissance and lethal or non-lethal weapon delivery. With very little development effort and minimal funding, a modern police force can include RPVs as an aerial policing multiplier.

Police RPV characteristics:
•     RPVs can be multi-purpose, single-purpose, recoverable, throw-away, passive, aggressive, armed or unarmed, lethal or non-lethal, all weather and light conditions capable, solitary or controlled swarm, silent or deliberately noisy, autonomous or controlled, or a combination.
•     Pre-programmed flight path data is already available with modern GIS and technologies. If this is combined with police patrol emergency transponders, response times and eyes on the scene can be very rapid. Police commanders would have a true 3D picture with accurate control and response overhead.
•     Based on military experience, RPV weapon delivery could be easily adapted for police use. Payloads may include loud speakers, facial recognition cameras, and/or incapacitating weapons (like low velocity chemical tranquilizing darts or aerosols, stun guns, focussed high decibel noise disrupters or ultra fine lightweight high strength projected “sticky” nets).
•     Tactically prepositioned autonomous or semi autonomous drones with competent operators can respond very quickly in massed crowd and traffic conditions.
•     Multiple passive/active sensing capabilities are already available.
•     Photo ID and facial recognition lock on.
•     Many different options of available platforms are inexpensive and easy to procure with minimal lead times.
Police RPV advantages
•     RPVs can rapidly shift the initiative from adversary to police.
•     Reduced risk of police and civilian casualties.
•     If a bystander is engaged accidently by an RPV operator, there is little chance of death or permanent injury — aside from the immediate effects of tranquilizing.
•     Extremely difficult systems for individuals, terrorists or criminal adversaries to detect or counter effectively.
•     RPVs using non-lethal weapons can immobilize and capture perpetrators with little risk to the public. A captured terrorist is a valuable source of intelligence
•     Complimentary to existing surveillance systems (CCTV).
•     Small and lightweight means easy deployment by air, vehicle or person.
•     No RPV infrastructure requirement: launch and recover anywhere (police station roof tops, cars or vans or backpack).
•     Evidence detection and real-time logging means the “real story” for the courts and justice system.
•     Deployment, redeployment and recovery at high speed.

The employment of police force multiplier RPVs seizes the initiative from any adversary and provides an incident commander a multi-dimensional global perspective of the incident. They allow unhindered and safe acquisition, and neutralization of terrorists in crowded, confused conditions. The risk of “collateral damage” is very low and the employment of RPV systems is beyond the high-risk R&D phase.

RPVs are cheap by comparison to police personnel, and can be modified to suit any situation or threat factors. They can be easily sacrificed if necessary and do not suffer from PTSD, physical or mental fatigue.

RPVs are far from being the all-encompassing solution, but they are an exponential police force multiplier for efficacy, low cost, police force protection and public safety.