As we look back over the course of history we can see that animal welfare laws have improved drastically. We have seen an increase in awareness of what to look for and who to call when cruelty, neglect or abuse is suspected. Animal cruelty crimes have always existed and although the methods of committing these acts haven't changed, the level, degree and complexity of animal cruelty and neglect has. 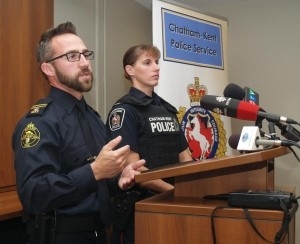 A scene from a press conference regarding a dog fighting investigation.

This article serves as a tool for law enforcement, giving you a basic understanding of what is happening when it comes to dog fighting in our communities. I have served the past eight years as an officer with the Ontario SPCA (Society for the Prevention of Cruelty to Animals) and although I have moved on in my career, I’m still a professional responder with the (American) ASPCA as a member of their Field Investigation and Response Team (assisting with bloodsport investigations) and in my new role working for the Town of Aurora Bylaw department. I want to share with you what I have learned during my time investigating animal fighting and also to remind anyone who has knowledge of or suspects animal fighting to report it to your local police or Crime Stoppers.

Happening in Ontario
In May and October 2015 and also in March 2016, I had the opportunity as an inspector and lead investigator for animal fighting under the Ontario SPCA to work with two community partners, the Ontario Provincial Police and the Chatham-Kent Police Service, on suspected dogfighting operations. All three investigations were joint-force operations leading to 11 search warrants being executed on three properties across Ontario. These investigations resulted in the seizure of 64 pit bull-type dogs, documents, pictures, veterinarian supplies, electronic equipment and hundreds of items relating to the training of dogs to fight. The October 2015 investigation was the largest alleged dog fighting investigation in the history of Ontario.

Now here’s the question you may be asking yourself: “is dog fighting really occurring in Ontario?” The answer is an unequivocal, “yes.” This is one of the most heinous forms of animal cruelty and it is indeed happening across this province. This type of animal crime cannot occur with only one or two parties; it requires a network of individuals who work underground and attempt to do so undetected. Dog fighting, like cock (rooster) fighting, is closely tied to organized crime involving guns, drugs, illegal gambling and gangs.

An actual organized dog fight involves signed contracts, an amount agreed upon for the winning purse and at a location out of the eyes of the community. (Although dog fights are often held in rural areas, it also happens within our cities, hidden by the appearance of a house party.) These contracts will include all details necessary such as the identities of the “dogmen” or handlers/owners of the dogs, a “referee” who will oversee and call the fight, the weight of the dogs, location of the fight and that the fight will adhere to the “Cajun Rules.”

When contracts are signed, fights can include wagers up to and exceeding $10,000. In some cases, a limited number of participants are allowed at the fight. Other times there may be numerous “spectators” who place additional bets beyond the amount listed on the contract.

Dog fighting is a sadistic form of entertainment, like a barbaric version of MMA fighting for dogs, where the dogs are subjected to various levels and degrees of rigourous and intense training with the goal of developing strength, endurance and aggression. This training is called putting the dog in “keep.” This includes weight pulling, time spent running on treadmills, slatmills or carpet mills. Oftentimes the dogs will be required to wear a weighted vest or have weights attached to their legs. They may be hooked up to a “Jenny” with bait placed before them. The bait might be rawhide or even live small animals, such as a chicken or raccoon, which may be given to the dog as a reward upon completion of the day’s training.

The dogs are also trained on “spring poles,” devices suspended from a tree or pole, made up of a large spring with heavy rope and a piece of bait attached at the end. The dog is encouraged to grab the bait and hold on so that the dog is suspended off the ground by its jaws in order to strengthen the dog’s bite.

“Flirt poles” are also often used to entice the dogs while they are tethered to heavy steel chains; yet another form of strength training. All of this training is done to develop and enhance optimal strength and endurance.

The dogs are typically kept on a property in what is referred to as a “dog yard.” These dogs will have a thick two-inch wide, heavy-duty collar connected to steel chains, which have been fastened to steel poles or buried car axles. The dogs are forced to drag these heavy chains every time they move, another form of strength and endurance training. The dogs are chained just out of reach of each other, which encourages aggression from frustration.

To dogfighters, details are crucial; everything is documented from the dogs’ weight, diet and their waste, to how long they have trained that day and how they have performed. These “training logbooks” will also include breeding records and what vitamin supplements and steroids the dogs have been given. In the past, there were illegal publications specifically focused on dogfighting, such as Sporting Dog Journal. Today dogfighters share their information online.

Both male and female dogs are used in fights, male dogs against male dogs and females against females. Often the females are the most “game.” Gameness refers to a dog’s desire to fight and its willingness to continue fighting regardless of pain, injury or imminent defeat by its opponent. The owners and handlers are often referred to as “dogmen.”

“Game” dogs will fight until the referee calls a winner. The losing dog may die as a result of its injuries or at the hands of its humiliated owner. In rare cases, the fight results in one dog killing its opponent, which speaks to the degree of “gameness” in the winning dog. If the losing dog is deemed worth keeping, the owner will provide their own version of medical care. A dog that will not fight is referred to as a “cur” and is often killed inhumanely, such as by strangulation, drowning or electrocution.

Injuries are usually treated by the owner — bringing the dog to a veterinarian is not an option. Broken bones/teeth, loss of blood and significant scarring to the front legs and head are often indicators that a dog’s been used for fighting. A possible warning sign that a dogfighting ring could be in your area is if veterinary clinics report frequent break-ins. Veterinary clinics are the best source for equipment, meds, and supplies that dogfighters need to provide on-site amateur treatment of an injured dog.

When a dog wins a contract fight, it is referred to as a “1XW,” meaning “onetime win” or “one-timer.” Once a dog has won three fights, it’s known as a “Champion” and if it successfully wins five fights, it is referred to as a “Grand Champion.” Online pedigrees will show the breeding history and the record of wins for each dog in order to support the lineage of the dog and increase the value of its offspring. In addition, dogfighters in Ontario are known to have international connections.

Trends
In Ontario we are seeing terminology being used that’s out of the norm, for instance, references are made to the dogs being used for “hunting” and a fight will be referred to as the “hunt” instead of a “convention.”

A new type of fighting that has popped up is called “trunking.” This is where two fighting dogs are loaded into the trunk of a vehicle, the radio is blasted while the people drive around until such time that they check to see who the winner is, all the while placing bets.

Pit bull-type dogs are the most commonly used breed for fighting, however, dogfighters will try to pass them off as “Patter Dale Terriers,” “Lerchers,” “Bulldogs” and “Russian Bulldogs.” They will also often falsify veterinary records, including using the names of clinics that do not exist and the names of veterinarians who do not practice or are not licensed in Ontario. These documents are used in the import and export of fighting dogs in and out of Canada.

“Animal cruelty is a community problem that requires a community response,” said Joe Stafford, Director of Animal Law Enforcement in Pueblo, Co. It is an important statement to remember.

We know animal abuse is a precursor to other forms of violent crime, crimes against people and against property. It is imperative we be aware of what’s happening across Ontario. As community partners we need to keep our lines of communication open and share what we know is happening in our backyards. In doing so, we develop stronger relationships to work together to help keep our communities safe for both people and animals.

Brad Dewar is currently the supervisor of animal services for the Town of Aurora, Newmarket and Georgina in Ontario. In his past career, he worked at the Ontario SPCA since 2010. During this time, he has performed the duties of a use of force instructor/trainer and media relations officer managing the media for the investigations department at a provincial level. Dewar has been recognized and awarded for his ability to investigate complex animal fighting investigations, building partnerships over the past 10 years with organizations across Ontario and North America and creating community engagement/crime prevention initiatives. Reach him at bdewar@aurora.ca.
Print this page