The Hamilton Police Services Board has announced the appointment of Paul Hamilton as the new Deputy Chief of Police. Deputy Chief Hamilton is a 31-year Hamilton Police Service member, most recently serving as Acting Deputy Chief of Support Services. Prior to that, he worked as Superintendent in the Investigative Services Division. He has been a command lead on a variety of multi-jurisdictional major case management investigations that have included domestic and international law enforcement agencies. He is committed to further enhancing community-based policing and in building, fostering and advancing strong and sustained partnerships within their various and diverse communities. Deputy Chief Hamilton studied Sociology and Criminology at the University of Ottawa. He has been married to his wife Darcia for 25 years and they have raised two adult children in the Dundas Community. 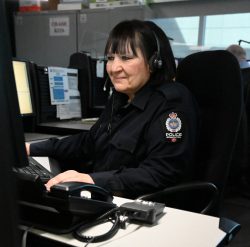 Constable Arlene Omilian is celebrating 42 years in policing and is the longest serving female officer with the Edmonton Police Service (EPS). Omilian joined EPS in 1979 and worked for most of her career as a Patrol officer in the community where she felt she could make a difference in people’s lives. While working in Downtown Division, she was called in to search a young female sex trade worker who was being arrested. She had a heart-to-heart conversation with her, “What are you doing here? You’re better than this.” Years later, she was approached by the same woman who said, “Remember me? You really turned my life around. I went back to school and I’m working a job now. I’m happy, happy to be alive, thank you.” Today, Arlene works in the Police Communications Branch, where her years of wisdom and experience continue to help citizens and first responders get through emergencies.

The Brockville Police Services Board has announced the appointment of Mark Noonan as Chief of Police. Chief Noonan began his career in 1992 with the Brockville Police Service. He worked uniform patrol for 9 years before working the bulk of his career in Criminal Investigations and Intelligence. He was promoted to Deputy Chief in February 2018, where he provided oversight and leadership in day-to-day operations, training, clerical and technical services and emergency planning. He was raised in Brockville, attending Brockville Collegiate Secondary School and then Carleton University where he obtained his Bachelor of Arts degree. Noonan has received extensive training through the Ontario Police College, the Canadian Police College, and the Criminal Intelligence Service of Ontario. Chief Noonan is a member of the Ontario Association of Chiefs of Police (OACP) and the Canadian Association of Chiefs of Police (CACP). Chief Noonan is a valuable member who has displayed dedication to the Service and the community.

If you have an officer in your agency recently promoted or retiring or an individual you wish to have recognized (major award or recently deceased) you can let Blue Line magazine know by emailing: bschroeder@annexbusinessmedia.com.