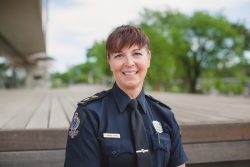 The Regina Police Service is proud to announce the promotion of Lorilee Davies to the rank of Deputy Chief. Davies has led an impressive 25-year career at the Regina Police Service building towards this promotion. Starting her career in 1996, Davies has worked in both uniform and investigative divisions of the police service. She also provided leadership in community based and human resource sections of the service and has been a member of both the Public Safety and Crisis Negotiation Teams. Davies spent many years on the Regina Police Association, which has enhanced her very balanced view of issues facing the dedicated staff, police service and community. Recently, as the Supt. of Community Services, Davies led many operational and proactive community initiatives. Over the past couple of years, her diverse assignments have spanned from managing large scale protests and labour disputes to providing oversight as a Critical incident Commander on Emergency Services calls. Davies also developed and leads a TRC committee and strategy for the police service. D/Chief Davies is a thoughtful and innovative leader who will continue strengthen the police service and community in her new role. 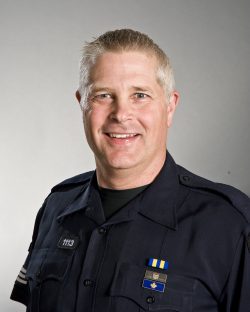 Regretfully, the Vancouver Police Department and Metro Vancouver Transit Police acknowledges the passing of Ret. Sgt. Ray Winters. Ray joined the VPD in 1981 and completed 30 years of service when he retired in 2011. Winters then joined Transit Police, serving the community for an additional 10 years, and finally retiring from policing in 2021. During Ray’s time in policing, he predominantly served in patrol developing strong operational experience, and was known for being tenacious and compassionate. He completed 10 years in the VPD Canine Unit. After promotion to Sergeant, he completed a four-year secondment as an instructor with the Justice Institute of B.C., inspiring and influencing young recruits. Winters attained the rank of Sergeant in both agencies. He created an environment that allowed all members of his team to thrive, to grow and to reach their full potential. He influenced and developed many young police officers through the formative years of their career. He will be sadly missed. 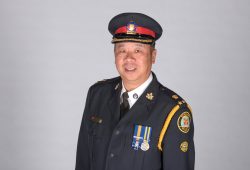 Deputy Chief Peter Yuen, a member of the Toronto Police Service’s Command Team, has retired after 35 years with the TPS. D/Chief Yuen was in charge of the Service’s Community Safety Command, which provides proactive and reactive public safety services and programs in partnership with diverse communities and key stakeholders. He is proudest of the meaningful partnerships the Service has developed and expanded that are most relevant to the heart of the community, including the Neighbourhood Community Officer Program, and the expansion of the Mobile Crisis Intervention Team Program. D/Chief Yuen has acquired an extensive variety of professional experiences, including in the areas of uniform patrol, undercover work, criminal investigations, community response, Asian Organized Crime, the Homicide Squad, Human Resources, Duty Operations and Corporate Risk Management. He has been recognized as an Asian Organized Crime expert by Ontario courts, and has spoken both nationally and internationally on the topic. D/Chief Yuen has received numerous awards for his career contributions, including the prestigious Order of Merit of the Police Forces. The Board thanks D/Chief Yuen for his outstanding and meaningful contributions to both the Service and the City of Toronto over the years. 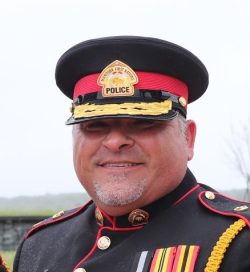 The Lac Seul Police Service proudly selected Bruno Rossi as their newest Chief of Police. Rossi brings 25 years of operational and administrative experience to the community. He is currently the Inspector of Support Services with the Manitoba First Nations Police Service (MFNPS) in Portage La Prairie Manitoba. Rossi has extensive experience working in various First Nation communities throughout his Policing career. Between June 2020 and November 2021, Rossi was the Acting Chief of Police for MFNPS. Rossi starts his new role on May 02, 2022 and a swearing in ceremony will be announced at a later date. Rossi is replacing Staff Sergeant Jason Spooner who has been the Acting Chief of Police on secondment from the Ontario Provincial Police since 2018.

PROMOTIONS, RETIREMENTS, RECOGNITION • If you have an officer in your agency recently promoted or retiring or an individual you wish to have recognized (major award or recently deceased) you can let Blue Line magazine know by emailing: bschroeder@annexbusinessmedia.com.

Related
Q&A with Colin MacLeod, retired RCMP pilot
“Making sure we have partners at the table:” Q&A with Edmonton’s new police chief
Q&A: Lonny Blackett
When media releases and tweets don’t do the trick