Features
Committed to community, wildlife and beyond 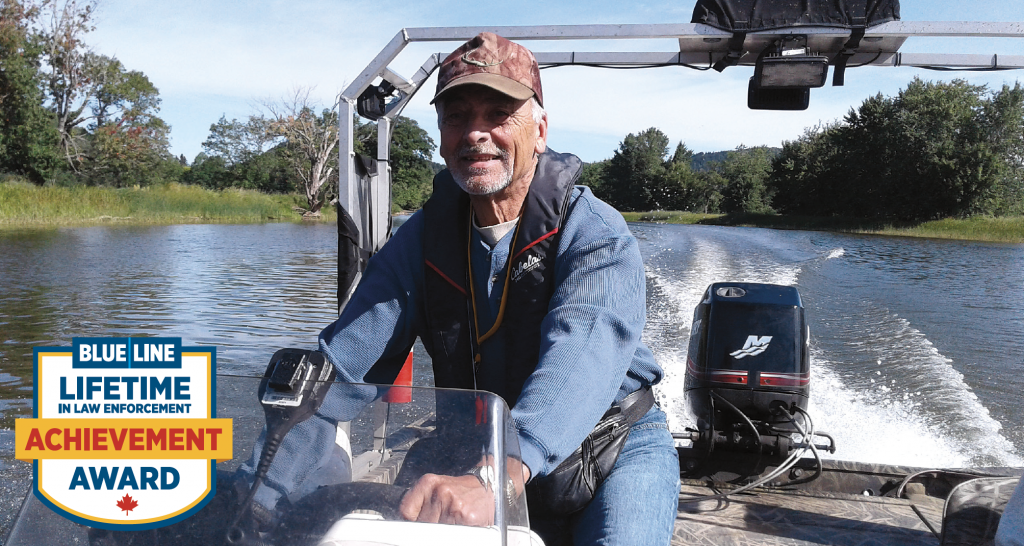 Thibodeau, known as Bob to colleagues, family and friends, says he wouldn’t change his career for the world. Photo: Clint Reicker

Blue Line is proud to present the 2020 Lifetime in Law Enforcement Achievement Award to Conservation Officer Robert Thibodeau of Cambridge-Narrows, N.B., who has been serving his community and greater environment through steadfast work and volunteering for more than 30 years.

This award, now in its third year, is presented to an individual who has shown exceptional leadership, dedication and passion towards their work in law enforcement for more than 15 years. It is open to any law enforcement officer outside of a traditional policing agency — as such it targets public safety organizations like Canada Border Services Agency, Correctional Service Canada, conservation groups, etc.

Thibodeau, known as Bob to colleagues, family and friends, says he wouldn’t change his career for the world.

“I like the comradery with the other members and the trust we have in each other… I’m a team guy” he tells Blue Line, a nod to all the years he also coached minor hockey and youth sports. He adds that if it wasn’t for the support of his wife, Jackie, and their children, he wouldn’t be where he is today.

“Bob could be off work and he knows that a particular officer is working alone,” says Sgt. Clint Reicker, Thibodeau’s supervisor for the last six to seven years, “or if Bob finishes his shift and knows, for example, I’m working a later shift alone… he literally has his portable on and is listening until I say I’m 10-35 (off duty) and home safe, which is really something. We all look out for one another but Bob goes above and beyond.”

Thibodeau also credits the path he chose to a Saint John Police officer, Det. Donald Dwyer, who was his mentor when he was working as a civilian for the Saint John Police Force in the early 1980s, serving as a youth liaison.

“Long before they came out with the term community-based policing, Donnie was already doing that kind of work,” Thibodeau says. “We’d do school programs together. He’s the guy who showed me how important it was to be active in your community, to listen, to work with people… because in law enforcement, if you are able to communicate with all kinds of people, make contacts, that will only help you down the road.”

It was a life lesson he’s continued to live by every day since — and it shows.

“He takes his job as a peace officer to heart, to serve and protect the community to the best of his abilities every day. He is one of the most caring, humble men I know, and I am proud to call him my friend,” writes Deputy Sheriff Jason Henderson with the New Brunswick Department of Public Safety, in a letter submitted with Thibodeau’s nomination package. “I personally have worked in law enforcement for approximately 20 years in various capacities. I have worked with hundreds of very fine officers, some of whom I would consider to be the best people and officers I have ever met; however, Bob stands out above them all. He is truly an inspiration to us all.”

Reicker concurs. “Bob is dedicated and very flexible… Regardless of what I ask of him, he is always willing to do it. I can call on him anytime of the day or night and he will always answer; and in this day and age that’s a rare thing. Bob is committed to community and in particular to young people; he is a hunter education (HE) instructor. He ends up doing the majority of the HE classes we are called upon to teach, which, to be honest, isn’t one of the more popular duties we have but Bob loves to do it.” 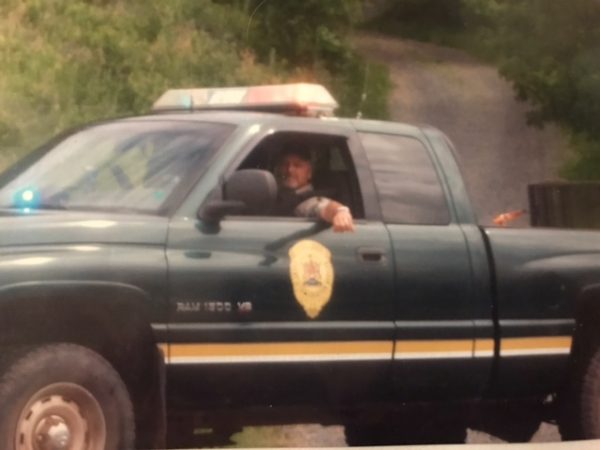 Today, Thibodeau works out of Region 3 East, Conservation Enforcement for the New Brunswick Department of Public Safety. It’s a vast patrol area that spans from Saint John, up to Sussex, out through the Fundy National Park, out to Hillsborough, across to Riverview, then through to Salisbury and down nearly to Fredericton.

The father of three and grandfather of 10 is heavily involved with New Brunswick Crime Stoppers and the Cambridge-Narrows neighbourhood watch program, where he received recognition from the RCMP commanding officer of “J” Division. You can bet on finding him strolling alongside Smokey the Bear, too, every summer during community celebrations, talking to the public about fish and wildlife enforcement.

However, once upon a time, it wasn’t all boat patrols, pursuing individuals with Canada-wide arrest warrants through the woods at night and safeguarding endangered salmon. Thibodeau actually moved first into corrections after his time as a civilian with Saint John Police Force.

“They were looking for correctional officers at the time and after some communication with different police officers, I thought what better way to learn about people who were on a certain path, perhaps we could say a path of criminality?” Thibodeau says. “So, I was hired at the Saint John Regional Correctional Centre and I stayed there for about a year before becoming an auxiliary member with the New Brunswick Highway Patrol.”

It was there at the “old Black River Jail,” as it was called then, he learned how to read people and about how far a little respect can go.

“I spent probably 90 per cent of my time right in the cell block. This allowed me to keep a good handle on what was going on and I could pick up on trouble if it was brewing by the way the inmates were reacting. At the same time, the inmates came to understand me a little bit… I’d give them time to compose themselves when I’d take them to make their phone calls to loved ones. And they would actually show me respect in return, when there was a ruckus and I responded, they’d just stop it.”

After the birth of their first child, Thibodeau and Jackie left Saint John for Cambridge-Narrows, where he met Jim McFarland with the Department of Natural Resources in the Coles Island District. Together, they launched the village’s first sports program, a softball league.

“An opening came up at Coles Island and Jim talked me into applying… we were called game wardens in those days,” Thibodeau says.

That was 1989 and it led to a career that turned into a lifelong passion.

At the time, the deer population in Coles Island was thick and poaching was a problem for the game wardens.

“I had the privilege of working with Jim, Gary Scott and Randy Vail. They put a lot of effort into stopping incidents of poaching at night… The federal fisheries officer, Jim Kierstead, would come up and help us with his dog. As a younger member, I got to run with his dog, who was called Nicholas then. It was exciting; running through the woods at night, just going by what he was smelling. You know 99 per cent of the time, at the end that track, you’ll be dealing with someone with a gun.”

Conservation officers at the time were armed with just a .38 Smith & Wesson Special and they never knew exactly what they’d be running into, he elaborates.

“We’re often dealing with people with high-powered rifles so you have to keep your train of thought and you have to react in a millisecond.”

Thibodeau also spent 14 years as a use of force instructor, using his own vacation time to travel to the Atlantic Police Academy on Prince Edward Island to teach new conservation officer cadets. He was committed to this because the main goal is to ensure all members have the techniques and training so they can get safely home every night, he explains.

“The other big advantage of being an instructor is being able to travel the province. Stationed way down in the southern end of the province, I wouldn’t usually have that opportunity. This means you can build some key contacts and it’s easier to share information.” 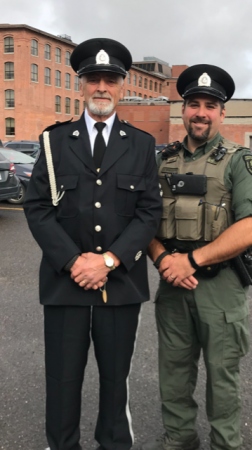 In 2018, Thibodeau received the Sovereign’s Medal for Volunteers from the Governor General of Canada. He was recognized for his work with youth law enforcement organizations, including Teens Against Drunk Driving and Citizens on Patrol.

“Many of the youth are too intimidated to come up and approach an officer so I try to be down to earth with them. I give many of them my cell phone number and tell them it’s always on… I do get quite a few calls from youth with some good questions and those turn into long-lasting relationships.”

But what is his proudest moment? Watching his son, Joshua, graduate and follow in his footsteps in 2010.

“He told me, ‘Dad I always wanted to do the job you do… He is so hardworking; he graduated with honours.”

Josh now works out of Region 3 South and is an acting corporal conservation officer.

As for the future, Thibodeau says he might hang up his hat in May 2021.

“I always tell Bob I can count on him to be the voice of reason in our group and that he will definitely be missed when he eventually retires,” Reicker says. “In general, Bob is a well-respected conservation officer and he is well known throughout the province. He is one of the ‘old school’ guys who has a lot of experience and knowledge, which he doesn’t mind passing along to the newer COs on our team.”

Retired or not, Thibodeau says you can bet he’ll still be outdoors every day, just keeping an eye on things.

“Even when I retire, I know myself personally enough to say that… Well, let’s just say, my message to my fellow members is that while you’re out there in the woods, doing your jobs, don’t be surprised if you turn around one day and see some old fellow sitting on the back of a horse,” Thibodeau says with a chuckle. “At the end of the day, I think I’m like a lot of people in law enforcement when it comes to retiring — I’d like to just saddle up and ride off into the sunset.”