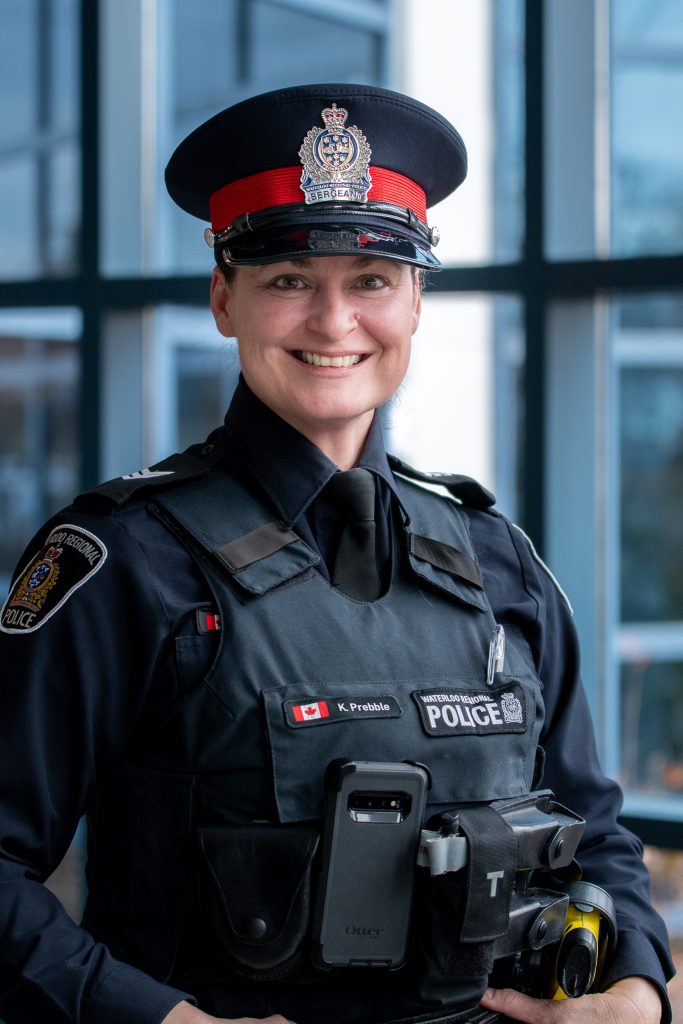 Blue Line is proud to present the 2021 Lifetime in Law Enforcement Achievement Award to Sgt. Kelly Prebble of the Waterloo Regional Police Service (WPS). The award is presented to an individual who has shown exceptional leadership, dedication and passion towards their work in law enforcement for more than 15 years.

Prebble began her career as a cadet at the age of 19 in 1992 and became a sworn member two years later, in 1994. Throughout her 29-year career, Prebble’s focus has been on fostering positive community relationships. She’s served as a constable, community resource officer, detective, service recruiter, detective sergeant and field supervisor.

Her dedication to community policing can be traced back to a relationship she formed with a homeless man during her first position as a patrol officer in Cambridge, Ont.

“I helped him whenever I could and, in turn, he made me a better officer,” she said. “The relationship I formed with him impacted the rest of my career.”

This mindset led to one of her most notable career achievements. In October 2001, she became one of the WPS’s first community resource officers. She served in the role until March 2004.

“The community resource officer role is important because many calls we respond to aren’t policing-related but people don’t know who else to call,” she said. “The goal of this position was to connect people with the proper resources, which ultimately helps the individual and reduces future calls to police.”

Prebble’s strong belief in community is also displayed through her continued education at the University of Waterloo in social development studies. A lifelong learner, this program is very important to her personal goal of increasing her capacity to understand society, conflict and the different practices that support community safety.

“While post-secondary education is important, I learned more from real world experiences,” she said. “I become more empathic, compassionate and caring about my community as my career progressed.”

In 2013, she was assigned to the WPS’ Rural Detachment. It was there, WPS Superintendent John Goodman said she made her greatest impact.

In the role, Prebble worked to promote important proactive concepts and improve community safety by preventing crime. She formed strong connections with the local politicians, CAO’s and Mennonite community elders.

“Her ability to foster trusting relationships with community partners and the public was quickly recognized as a tremendous asset to the service,” wrote Superintendent John Goodman in Prebble’s nomination letter. “It set Kelly on a path of engaging with and caring for her community that continues today.”

She is also leader in providing Crime Prevention Through Environmental Design (CPTED) services to the community and, in 2018, she was designated as an International Crime Prevention Specialist (ISCPP).

Prebble is beloved by the rural communities she serves.

“She gives openly of her own time and makes herself available for guest lectures, safety presentations or for just a cup of coffee and conversation,” said Goodman. “It cannot be overstated how important this engagement is to building bridges and creating a safe community.”

She is also heavily involved with this organization in supporting the marginalized and those in need of support in the community.

“My focus now is building relationships within our diverse communities,” she said. “I approach it from the standpoint of needing to engage in more conversations and less presentations.”

Prebble is a part of a recently launched program called Connections, which focuses on relations and resources for local women of colour.

“It’s all about building trusting relationships and understanding our role as police within various communities,” she said.

For example, after a Muslim family was victim in a deadly terror attack in London, Ont., in June, she learned of a group of local Muslim women who were afraid to walk at night. So, she took it upon herself to meet them for a three-hour chat over coffee to discuss how police could help provide a sense of safety and normalcy.

“I was elated by the experience and by the opportunity to open doors and have this mutual understanding and have trust develop was incredible,” she said.

Sgt. Prebble has dedicated her life to community relations through her police work. Having led an exemplary career, she is being recognized for her commitment to community. For these reasons, it is Blue Line’s honour to present her with this year’s Lifetime Achievement Award.

“Supervisors, colleagues and team members have the utmost respect for Sgt. Prebble.” said Goodman. “She is an engaged leader who is continually looking to build solid, safe, healthy and lasting relationships within the service and with the community.”